I am looking for the same kind of data for the -1 series to the F2G but have less information to start with there.

I read a story one time about an F4U pilot being jumped by three Japanese Zeros. He shot one Zero down, caused another to crash in the sea and simply out ran the other back to the F4U Base. His engine was so hot it froze when turned off.

The cowl-flaps are longer, the exhaust stacks are re-positioned (in what appears to be aimed at pumping the cowl more effectively). The number of propeller blades are differently.

Sigh........Why would you quote a drawing? What is wrong with you? Stop it


Ivan1GFP said:
The question is exactly where those extra 4 1/8 inches were distributed.- Ivan.
Click to expand...

The repositioned exhaust stacks have more to do with exhaust thrust and balancing the back pressure between cylinders than with "pumping the cowling". Most (all?) planes that used the exhaust to aid airflow through the cowling NOT having adjustable cooling flaps going around a large percentage of the cowling.

I've superimposed the -4 over the -1 (as good as I can get it) and you can see that almost everything lines up except for the front of the cowl. Keep in mind my limitations at doing this and the accuracy of the drawings in the book

There was nothing else to quote... there was just an image.


Shortround6 said:
The repositioned exhaust stacks have more to do with exhaust thrust and balancing the back pressure between cylinders than with "pumping the cowling".
Click to expand...

Back-pressure? You mean like the heat of the cylinders increasing air pressure around them?

Most (all?) planes that used the exhaust to aid airflow through the cowling NOT having adjustable cooling flaps going around a large percentage of the cowling.
Click to expand...

Zipper730 said:
Back-pressure? You mean like the heat of the cylinders increasing air pressure around them?
Click to expand...

back pressure is the pressure inside the exhaust manifold/pipe/exhaust port that the exhaust gases escaping from the cylinder though the exhaust valve/s have to fight against. The more (higher) back pressure the less combustion gas leaves the cylinder meaning less fresh gas/air can enter, which means less power. Having cylinders in various parts of the engine or in different parts of the firing order/crankshaft rotation make different amounts of power complicates the vibration problems. 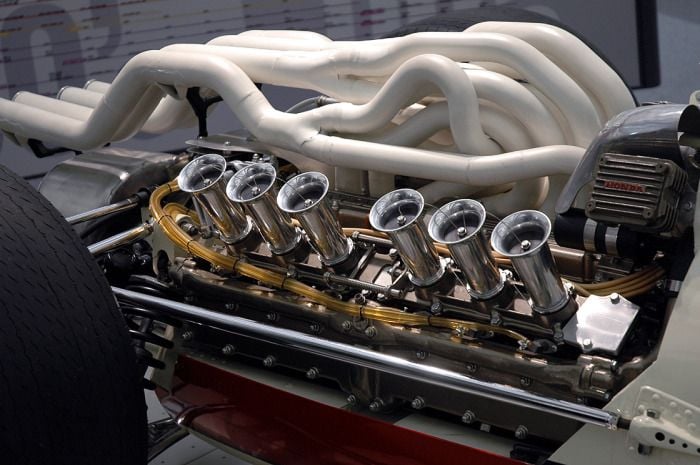 Note that they have 3 cylinders sharing one exhaust pipe. 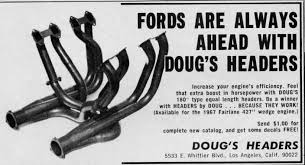 note on this one the pipe on the last cylinder from each bank crossed over and exited on the opposite side from the other 3 cylinders.
I

Thanks for the drawings. Those are pretty nice drawings. What is the source?
I am actually pretty familiar with the differences between the F4U-1 and F4U-4 but am trying to work on a 3D model so I am looking for exact dimensional differences to account for the 4.125 inch length difference.
I have several sets of dimensional drawings for the -1 but nothing except for overall dimensions for the -4.
Also, although the labeled dimensions look accurate, the drawings themselves don't always have the correct shape (such as the set by Paul Matt).

The attached drawing of the F4U-4 looks pretty good but I don't know the source either. If I can find the source, perhaps I can also find the equivalent F4U-1 drawing and do a comparison as you have done. Comparisons between drawings by different artists is generally a waste of time.

Regarding Exhaust Manifolds and Backpressure:
A supercharged engine has the same issues with backpressure as a normally aspirated engine.
The TURBO supercharged engines generally do not have the same issue because by the nature of their exhaust being used to drive a turbine, there must be backpressure caused by the resistance of the turbine.
Another possibility that was not generally seen until after WW2 is the turbo-compound engine. In this kind of engine, the exhaust gas is also used to drive a turbine but instead of the turbine driving a supercharger, it is geared back to the propeller shaft to provide additional power.

In piston powered aircraft, if the exhaust pipes are direct aft, the exhaust gasses exiting at high velocity and pressure adds possibly a few hundred pounds of thrust as a rocket effect. This rocket effect may be worth a couple hundred horsepower at high speed because as speed increases, the propeller efficiency gets much lower and exhaust thrust becomes a significant amount of the total thrust generated.

Regarding Automotive Exhaust Headers (Tubular Exhaust Manifolds):
Each cylinder on its exhaust stroke provides a high pressure blast of gas out the exhaust port.
Note that this blast or pulse is intermittent: Each cylinder only has one pulse per 720 degrees (2 revolutions) of the crankshaft.
Thus if you have a very long pipe attached to the exhaust port(s) (maybe it has more than one exhaust valve), the moving gas does a lot of starts and stops.
The trick here is that if you make one cylinder's exhaust pipe (runner) the proper length and combine it in a collector that is connected to another cylinder's exhaust, it can be timed (tuned) so that as one exhaust valve closes, the next exhaust valve opens, the column of gas provides a suction to help draw (scavenge) the exhaust gas from the next cylinder.
Exhaust scavenging can have a significant effect on the amount of charge air that is moved through an engine and thus add significantly to the power output.
The intake system is very similar in terms of gas flow so on modern cars, one often finds a plenum behind the throttle body and intake runners to each cylinder.
The problem with these designs is that the runner lengths tend to be optimal for a fairly narrow operating range so often one sees perhaps two sets of intake runners: One for high RPM and one for low RPM with a computer determining when to switch between them.
When things work very well, sometimes, the engine's volumetric efficiency in a certain RPM range may be quite a bit higher than 1.
That means that a cylinder may be pumping greater than its own volume of charge air. (This is quite rare but does happen.)

From Shortround6's images:
The first appears to be a typical Formula 1 V-12 engine with Weber carburetors. The intake is on the outside of each bank and the exhaust is between the banks. Note that this makes the exhaust runner design much easier. The typical engine firing order tends to alternate (mostly) between opposing banks of cylinders and for optimal scavenging effect, the exhaust pulses should come at regular intervals at the junction of the pipes.

The second image shows a very atypical set of headers for a V-8 engine. This setup was fairly common among oval track (Think Daytona stock car) racers at one point. Perhaps it is still common. I don't follow the sport any more.
Off the race track, this setup is not nearly as useful because the runners are too long to be useful at the typical engine speeds on the street.

I am sure some of you fellow gear heads already know this stuff, but hopefully this clears things up for some folks.
There is obviously a lot more to this game but no point in putting anyone to sleep.

If the line drawings are grouped together to the same scale with a scale bar visible somewhere - would that be of any use to you? 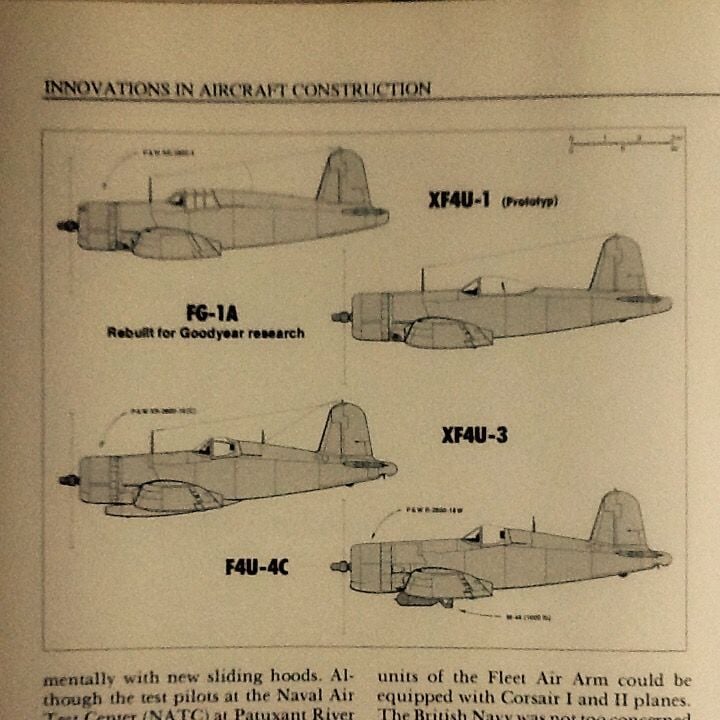 Thanks for the offer, Graeme.

That probably would not work well because I am actually looking for measurements down to about 1/10 inch or 0,01 foot which is the resolution of the software package I am using.
This is a rework of an old 3D model that was done based on some crude drawings in a book by William Green.
At the time I didn't really know any better and something with a radial engine and bent wings was close enough....
I figure if I am going to spend the time for a rework, I want to start with the best data that I can.
I have some pretty good drawings for the F4U-1 but not for the F4U-4 or F2G.

After looking at many hundreds of Corsair drawings, one can get a feel pretty quickly whether a profile is accurate or not and I can tell you that most of the ones out there are not accurate.

Ivan1GFP said:
I am actually looking for measurements down to about 1/10 inch
Click to expand...

1/10 of an inch might be do-able on certain parts/panels. 1/10 of an in on overal length or wingspan probably exceeds the accuracy the planes were built to.
I

Shortround6 said:
1/10 of an inch might be do-able on certain parts/panels. 1/10 of an in on overal length or wingspan probably exceeds the accuracy the planes were built to.
Click to expand...

Perhaps the actual assemblies had some tolerance stacking, but in this case, I am looking more for the design measurements.
Length of the -1 would have been 33 feet 4.125 inch and Wing Span would have been 40 feet 11.725 inch or 11.726 inch from some of the better drawings I have come across.

An approximation won't make a serious difference but I want to at least try to get the correct numbers first. There are always approximations in these kinds of projects, but if there are fewer, the shape of the model looks better.

billrunnels said:
I read a story one time about an F4U pilot being jumped by three Japanese Zeros. He shot one Zero down, caused another to crash in the sea and simply out ran the other back to the F4U Base. His engine was so hot it froze when turned off.
Click to expand...

That sounds like the story of Ira Kepford, one of the first combat uses of water injected WEP in the Corsair. Story was he sweated so heavily in the chase that his sneakers turned green. (The takeoff scramble was a bit hurried, and his flight boots got left behind!)
Cheers,
Wes
You must log in or register to reply here.

Something about the F4U Corsair

A
external differences between gnome rhone 14 N and P?

H
Vought F4U-1C, any blueprints or photographs that show the upper wing surface?