I very appreciate some help with two F4F-4 technical issue that I am not able to identify properly. This is small airscoop on the right side behind the cockpit, respectively opened canopy, plus small round opening/hole (unknown purpose for me) in close area and located slightly higher then airscoop but within one fuselage segment.

Both feature was not intruduced on F4F-3 or 3A with the exception of last production run of 100 planes that was built in spring 1943 after ceasing production of F4F-4 serie at Grumman factory.

Many pictures of F4F-4 show this both feature but not every ones, unfortunately. It seems that this both feature was introduced gradually somewhere during second production run (BN 5030 – 5262) in early Spring of 1942, i.e. not from the beginning. Several pictures show F4F-4 without airscoop as well as round hole (aproximately till Guadalcanal campaign), some only with the round hole and mostly ones with both feature.

On the contrary, F4F-4 black 13 of VF-6 (BN 5193) from the beginning of Guadalcanal campaign has only round opening/hole and no unit-marked F4F-4 of BN 5262 (served for testing of new system od double flaps) as last machine od second production run has already both fearures,

Well, there is several related questions,

a/ when was airscoop officialy intruduced and based on what (some technical USN bulletin or so)?

b/ purpose of round opening/hole (perhaps first unsuccessfull attempt for better ventilation of radio and other avionic equipment in fuselage, my guess)

Many thanks in advance.

Scoop was electrical/radio cooling, while the hole was for firing flares.

to BW,
good idea, but who will fire flares in in the fuselage ? Not believe that Wildcat was eqipped with automatic device. But may be wrong.

Most US aircraft had upward firing flare dischargers of one type or another. Sometimes it was just a mounting that a flare pistol fitted into. Many (most) early-war US single-seat aircraft used the US M5 version of the British Molins Signal Discharger (note that sometimes it is spelled Molin in US manuals). The British sometimes referred to the Molins as the Upward Firing Signal Discharger or the Automatic Recognition Device. I have read many accounts of them being used by the US in the PTO at various times. It was a 6-shot device, with one signal discharged for each pull of the T-handle. The Pilot would pull the handle as many times as necessary to meet the required IFF color codes and number of flares (usually 3).

There is a good chance that the F4Fs you are noticing without a hole actually do have the hole, but it was covered with a doped patch of cloth to keep the weather out when not in use. 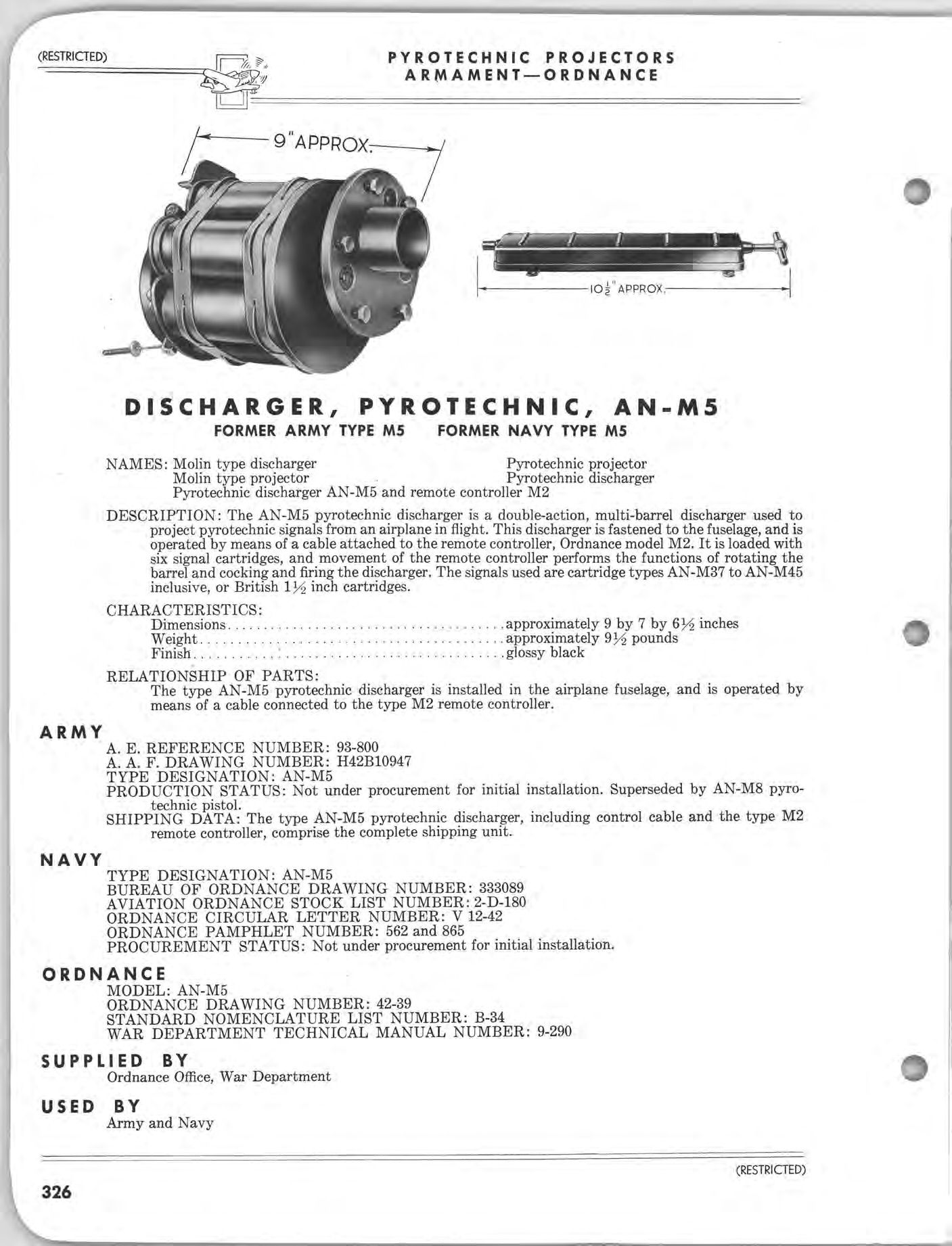 Most WWII aircraft (Allied and Axis) had provisions for discharging flares (either by pistol or device) from the cockpit area.
M 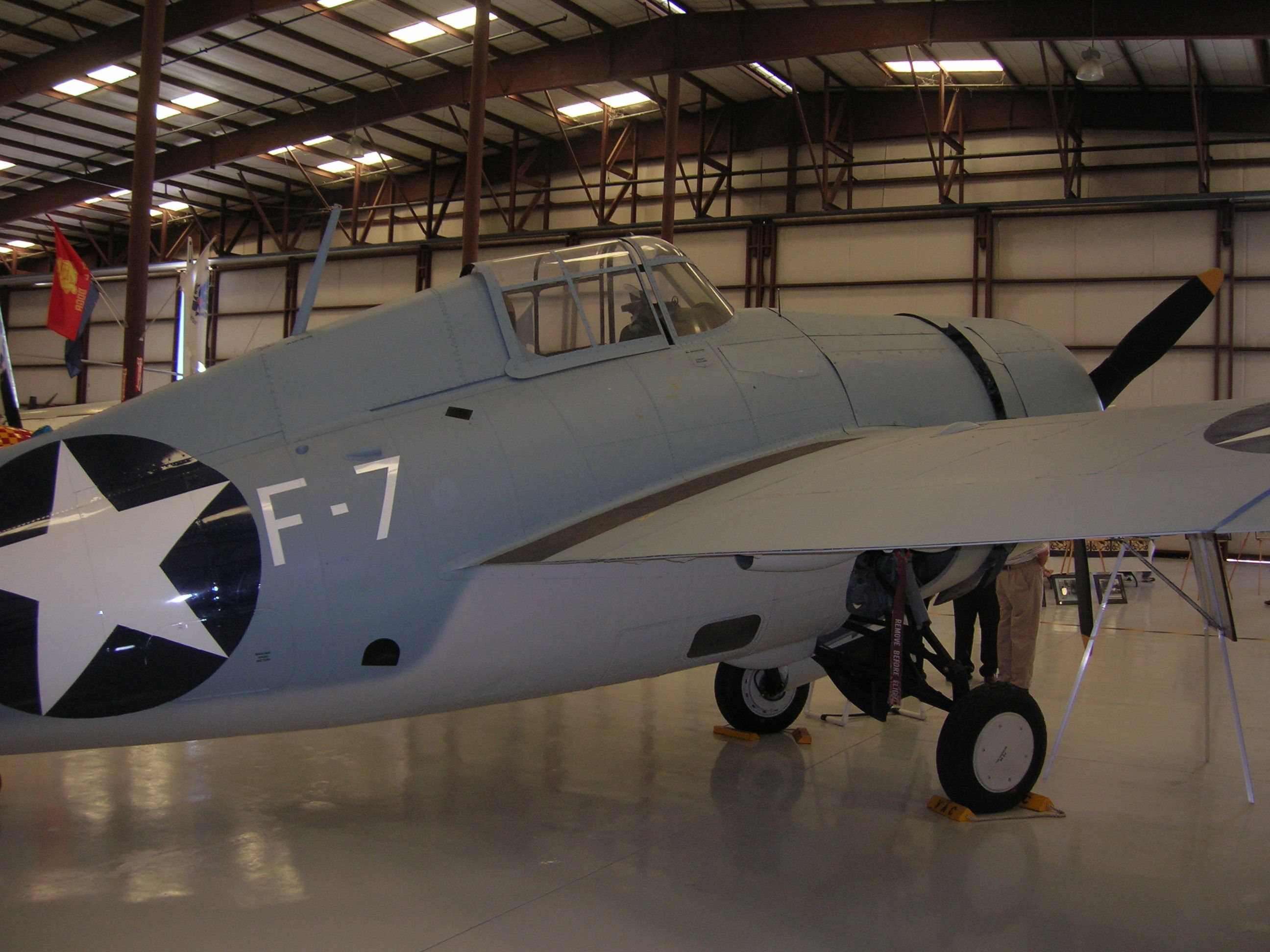 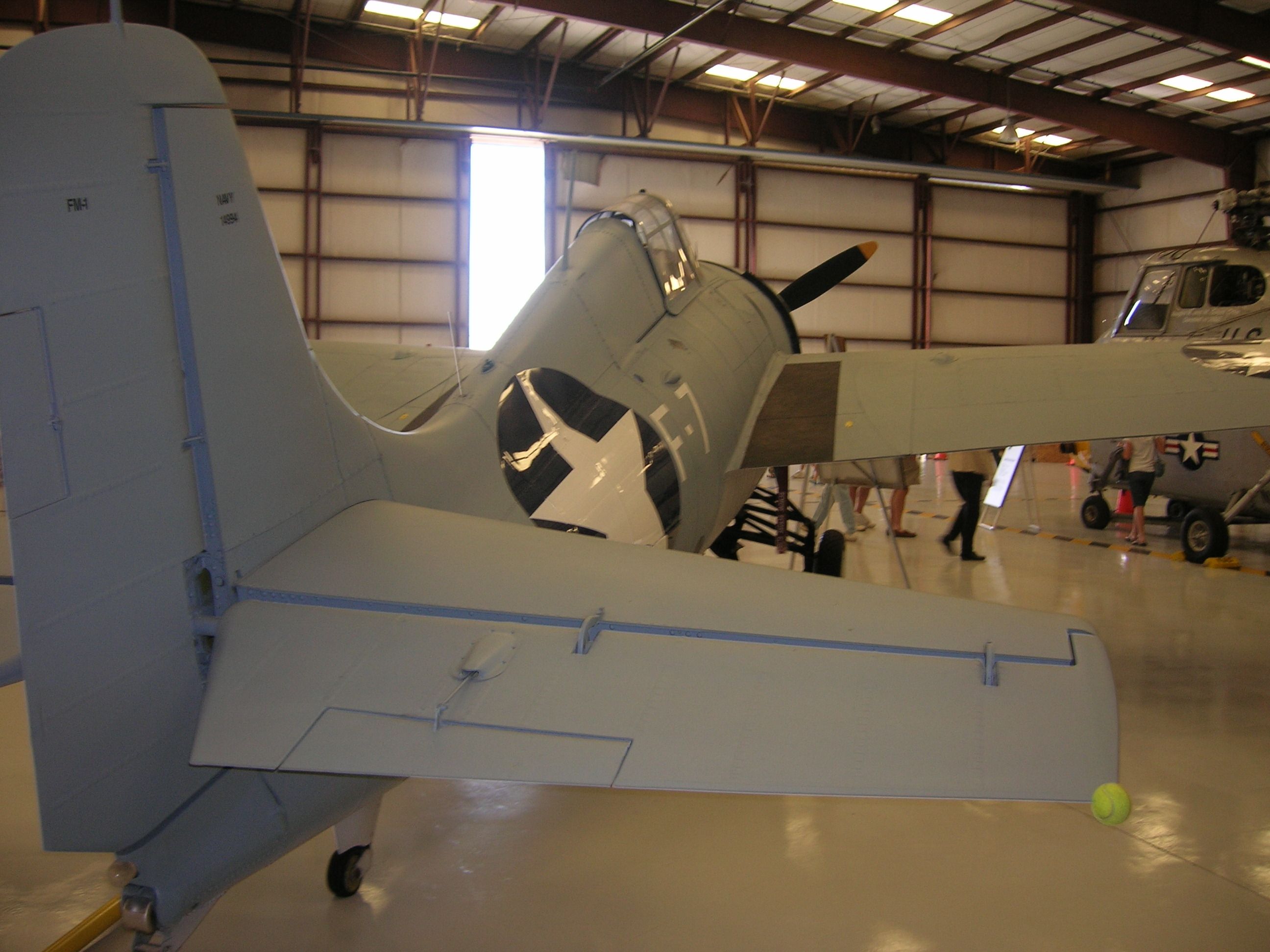 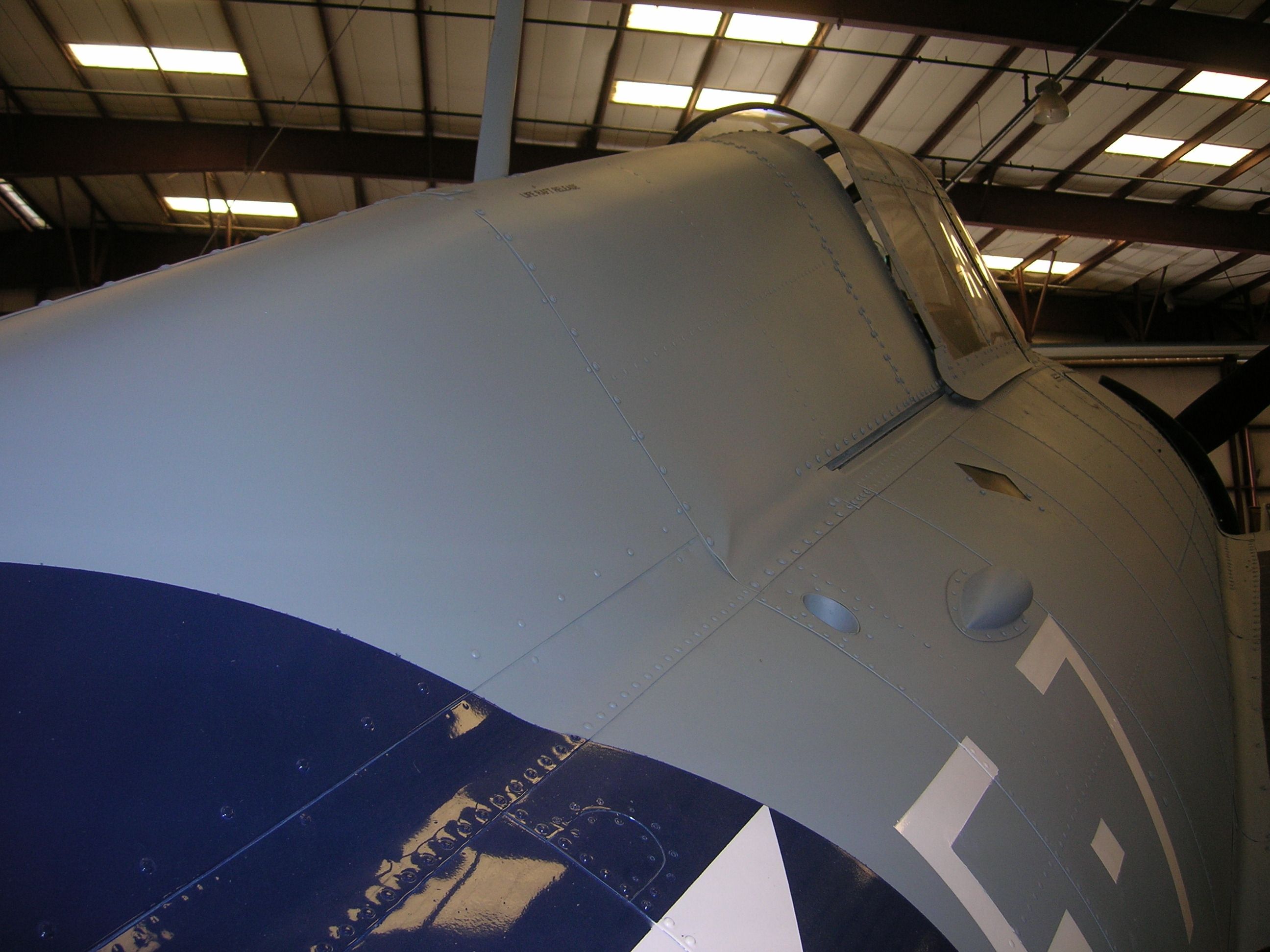 This si very interesting picture of fuselage interier heading towards to the cocpit. We can see some kind of tube with collar for connecting of something in position of hole/opening (right upper corner). Cooling opening covered with airscoope on the fuselage surface is directly behind and bellow the tube as on aircraft.

I can fully imagine that flare discharger may be attached the visible tube.

Before WWII it was common for even civilian aircraft to be equipped with parachute flares that could be dropped from the aft fuselage. In those days night cross country flight was a very risky endeavor, since in the event of the need to make an emergency landing the chances of finding a suitable landing spot were very slim. The parachute flares were designed to enable the pilot to find a place to land.
J

I believe this flares was intended to give signals to other planes or ship or airfield (and was not parachuted but fired) but not for searching landing or emergency landing spot.

This si very interesting picture of fuselage interier heading towards to the cocpit. We can see some kind of tube with collar for connecting of something in position of hole/opening (right upper corner). Cooling opening covered with airscoope on the fuselage surface is directly behind and bellow the tube as on aircraft.

I can fully imagine that flare discharger may be attached the visible tube.
Click to expand...

Note that the five holes in the plate shown in your photo, as well as the offset of the tube, perfectly match the illustration of the Molin projector previously show, bolts and all.
J

Seems the mystery was solved, finally. And the hole/opening (I will call it modification) was discovered on british Martlet Mk. II. (G-36B) firstly, even on first 10 planes with unfold wings, so there is good possibility that this modification was done according to british technical specification. And later accepted by USN/USMC during second F4F-4 production series (BN 5030 – 5262).
T

I have seen the hole for the AN/M-5 flare discharger on some F4F-3 airframes also, though I do not know if it was from the factory or a field modification.

Here is an example and some info on the AN-M37 flares used by the MOLIN Signal Discharger. Flares AN-M37 to AN-M45 are compatible with this discharger. As well as flare guns and M-79 grenade launchers.

This second link details each individual flare in the AN-M## series as to color, type (parachute, star cluster etc) and duration..as well as a lot of other ordnance.. Beware: I had some slight trouble viewing this on my phone, on the desktop no prob..

EDIT: After spending an additional 20 minutes on this site, I have to say it is a smorgasbord of useful information especially considering munitions of all major players of war from WW1 forward….

I can easily see this being a modeler’s reference for munition markings, both color and alpha-numeric.
Last edited: Nov 16, 2022
J

last 100 planes of F4F-3 manufactured in the Spring 1943 after ceasing F4F-4 production had this modification including airscoop on fuselage. This late F4F-3 had virtually F4F-4 fuselage with nonfolding wings, old style of pitot tube and was intended only for training duty. Confirmed by several pictures.

I believe that the flare set up was original and have pics of VMO-251 F4F-3P (BuNo 1855) and F4F-3 (BuNo 1890) with the opening, but no aux air scoop. This would indicate that the first production batch of F4F-3s had them and if i have time, I will pull out my copy of original Grumman bleuprints to see if it is indicated.
J

cross my fingers for your extra time,

by the way, Martlet Mk.II have this opening too, even first 10 planes delivered with unfolding wings like all F4F-3 variants.

Perhaps the introducing of flare discharger to Wildcats/Martlets is related to british specification for Martlet Mk.II.

Unfortunately not known the time when fuselage of Martlet Mk.II was manufacured. It was parallel wif F4F-3 and then they waiting for installation of folding wings except first 10 planes.

JN
You must log in or register to reply here.