I have just received the 1/16 Guillows balsa model Bf109 and it appears to be a solid model. This is my first attempt at a balsa model and probably beyond my skill level having made many smaller plastic model cars.

I would like to model this after the craft flown by JG53 Kommodore Günther Freiherr von Maltzahn over the skies of Malta. He hunted allied planes with his unit from their airfield at Comiso from December 1941 until he was promoted out of flying duty in early months of 1943. It will go nicely as a display with a signed VDA postcard and four photographs taken upon his landing after completing his 400th flight. I am stumped on the paint scheme of the craft he was flying at the time of his 400th feindflug so I would love your opinions. 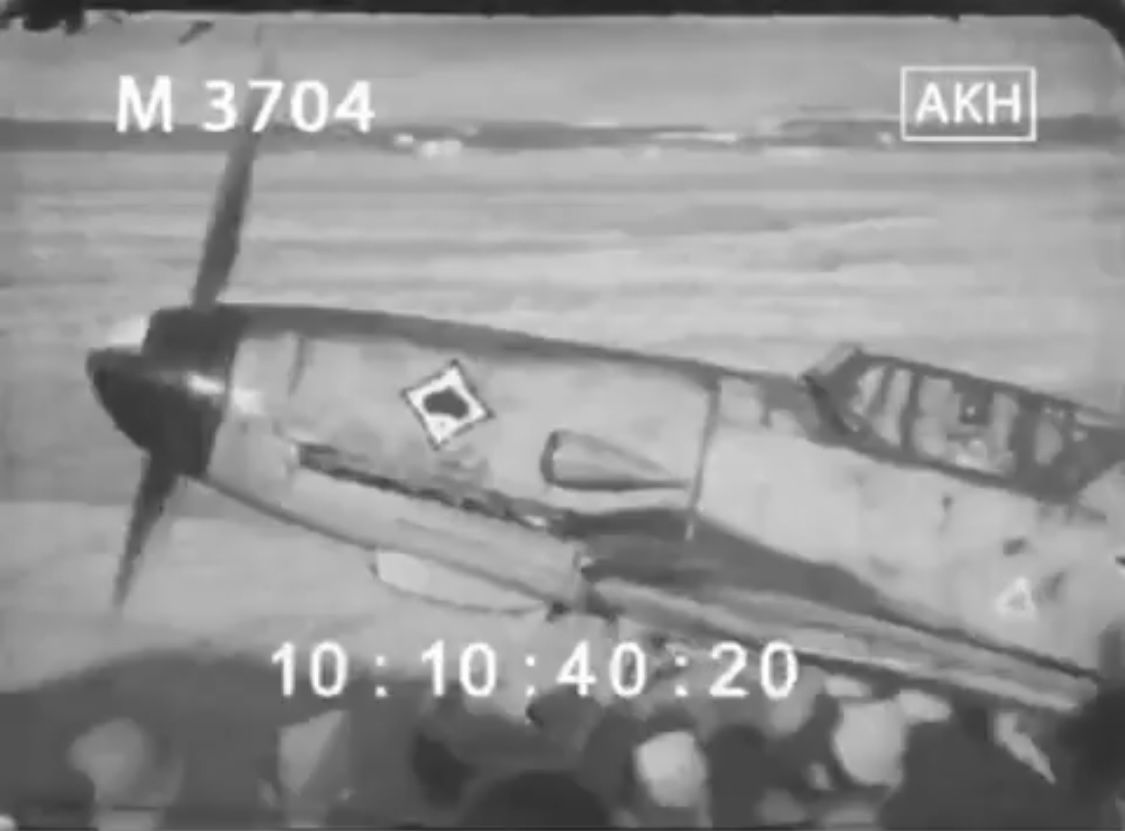 This is my primary source for the plane. This is a film reel I found in the archive of Agentur Karl Höffkes (AKH). This moment shows von Maltzahn taxiing in to the ceremony for his successful 400th. The camera operator never pans far enough to see the rear end of the craft beyond the double chevrons of his “<<-+-“ marking. Getting the correct number of rudder victories appears to be difficult because its not shown and I have not found any information about when he completed 400 flights with which I could compare to his victory count. It should be between 50 and his final claim of 68. Other observations I notice is light mottling? The cowling should still be yellow I believe, and 1/4 of the spinner tip is white (other 3/4 may be blue but I think its black). The aeromaster interpretations will say the spinners were green and the Osprey books say Stab.JG53 were blue. The rest appears tan with small sections of a much darker tan.

I do not have the Osprey book on Mediterranean and North African aircraft to refer to but I have looked to many other references including some suspicious interpretations from Aeromaster. From what I know, he operated only two craft while at Comiso. He was shot down in his F4 WNr 8326 over Russia on July 15, 1941. He began flying another F4 which he may or may not have flown to Malta. He then was operating a WNr 7282 over Malta until a Spitfire sent him into the Mediterranean Sea on May 11, 1942. At this point he may have flown another F4 or he switched to the Bf109 G2 he used towards the end of his flying career. Aeromaster claims he also flew a G6 even later.

This one from Aeromaster has been one of the most promising examples I have seen online. It is part of Aeromaster PAF 48-05 that has a few questionable renditions of von Maltzahn craft. The PAF 48-05 is shown below. The top example was used by a fellow on britmodeller.com to paint his rendition of von Maltzahn at Comiso. 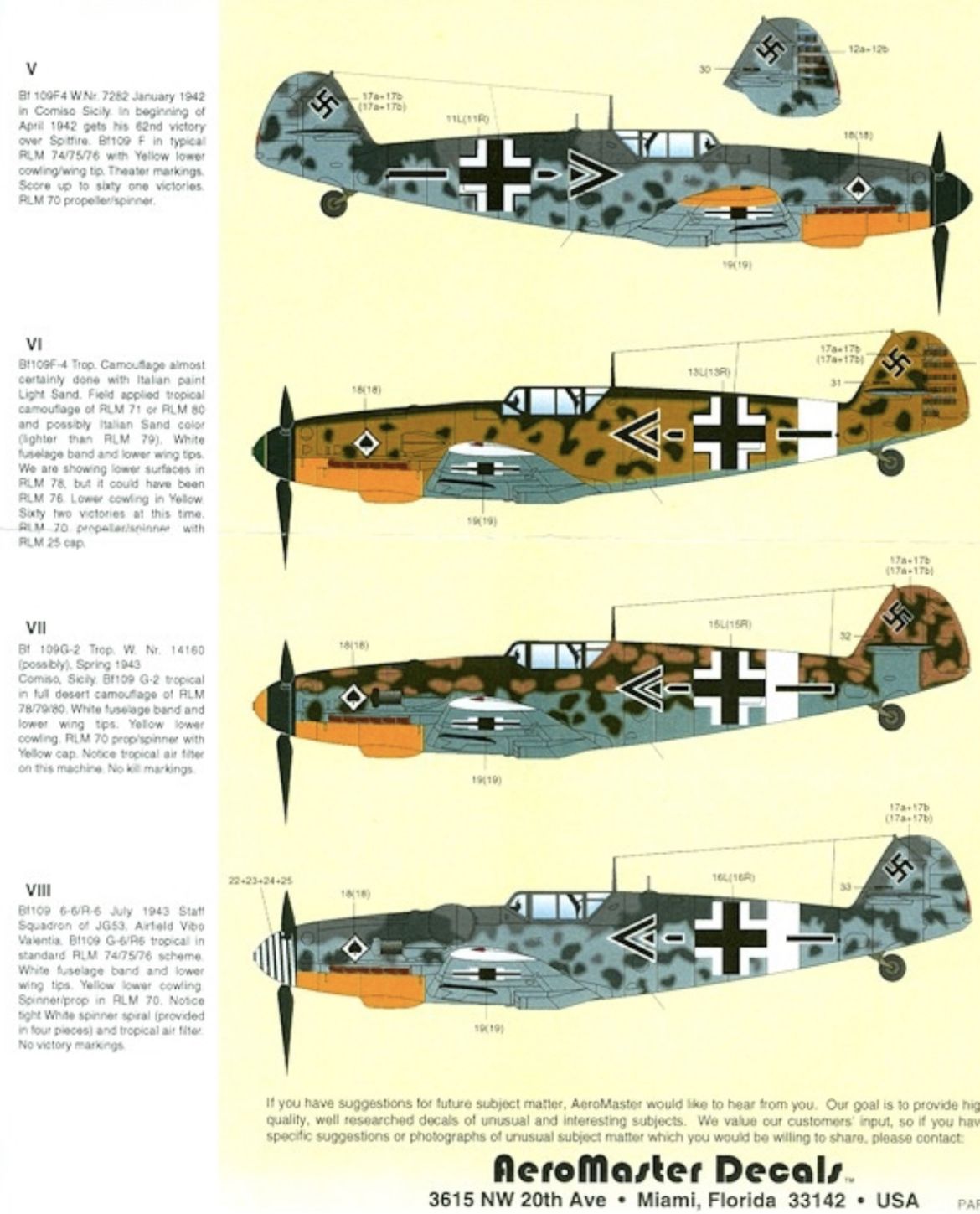 Another interpretation from Aeromaster that I dug out from somewhere. Shades of grey yet not like the dark greys they used while in Russia instead of tropical tans.

An interpretation from the HobbyBros kit. Not sure about the scheme of this one. The drop tank was not present in the archive film. Someone else on britmodeller had used as inspiration to paint von Maltzahn’s F4 at Comiso although it more resembled the top model of PAF 48-05 in regards to color pattern and scheme.

Thank you for any assistance you can provide me in fleshing out this model.

At the beginning I would like to make a focus on the fact thet the Guillows balsa kit is for the E (Emil) varinat. All profiles you posted above are of the F (Friedrich) and G (Gustav) versons.

I do have the Mediterranean and North African book but it just shows a profile. As the above master sleuth says, you have an E kit. This is Maltzahn's Luftwaffe career summary. Note that he flew a few E models....

Just found a couple of pics of von Maltzahn's kite that are dated on 1942 in Sicily .. however please note that the last pic shows the tail without the band. But in the second shot the band can be seen there. Anyway , any trop camo applied there. 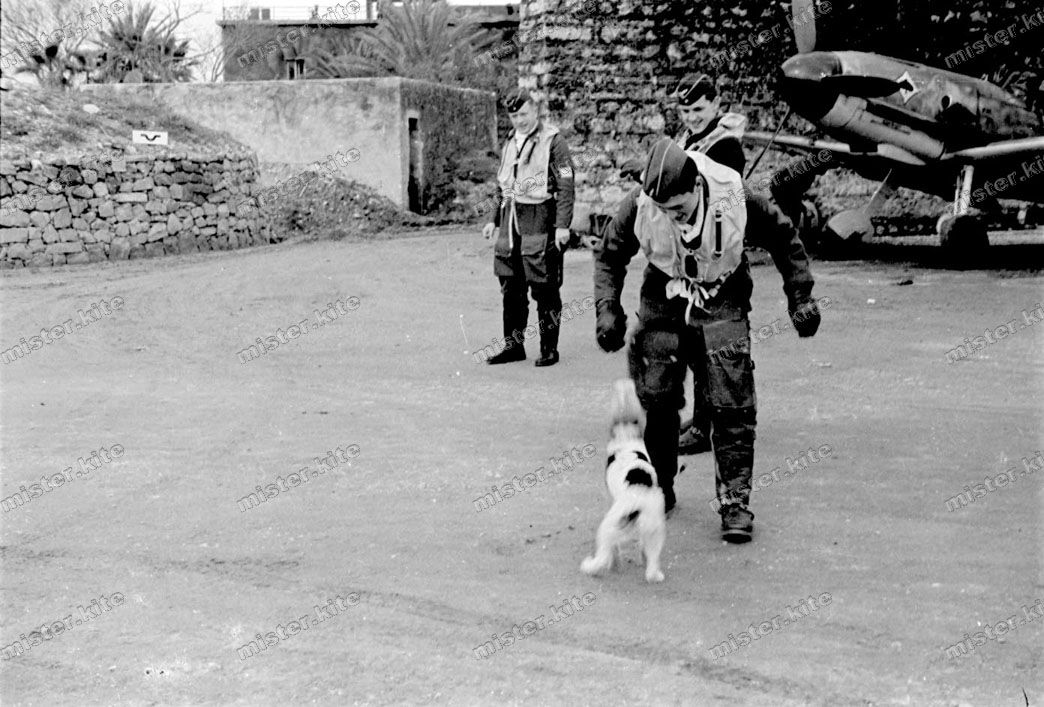 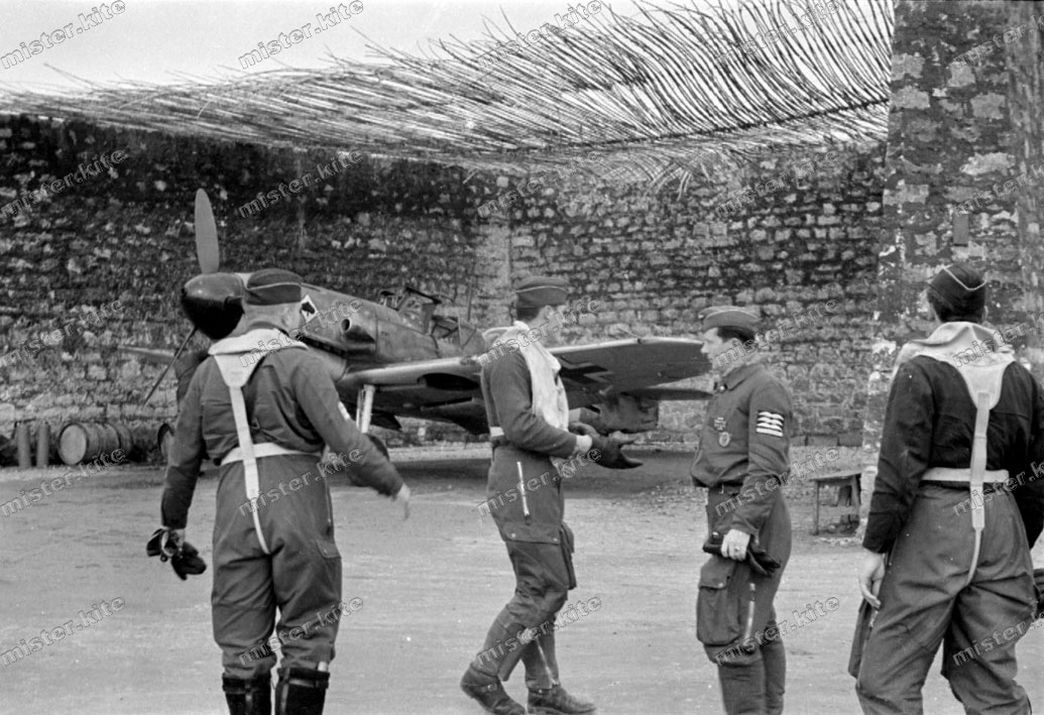 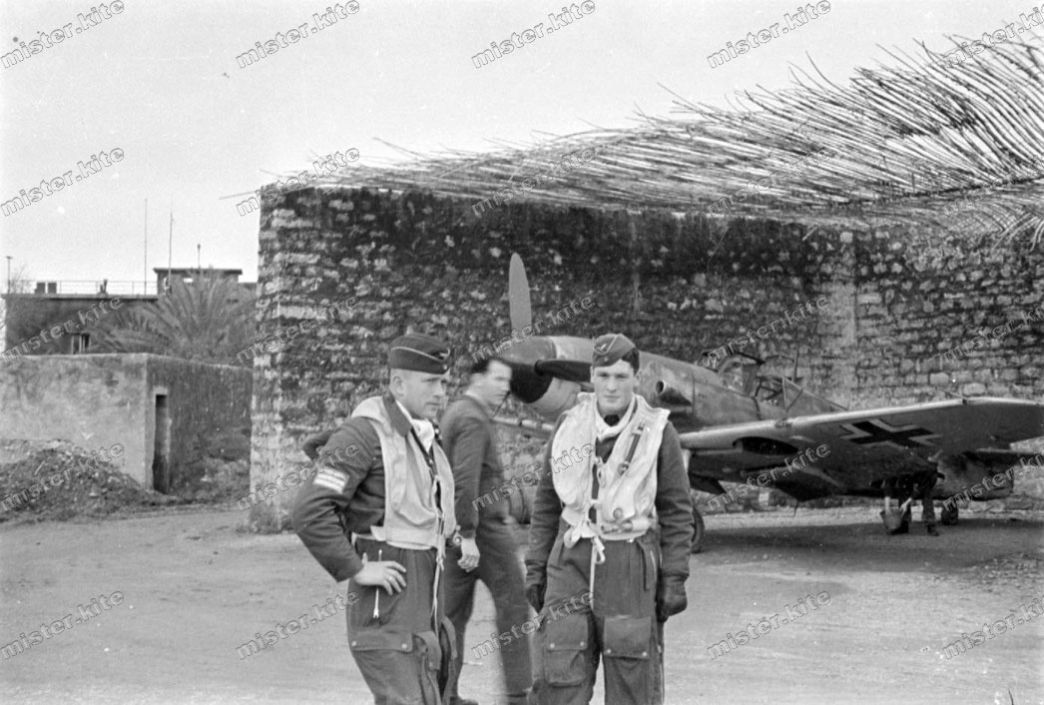 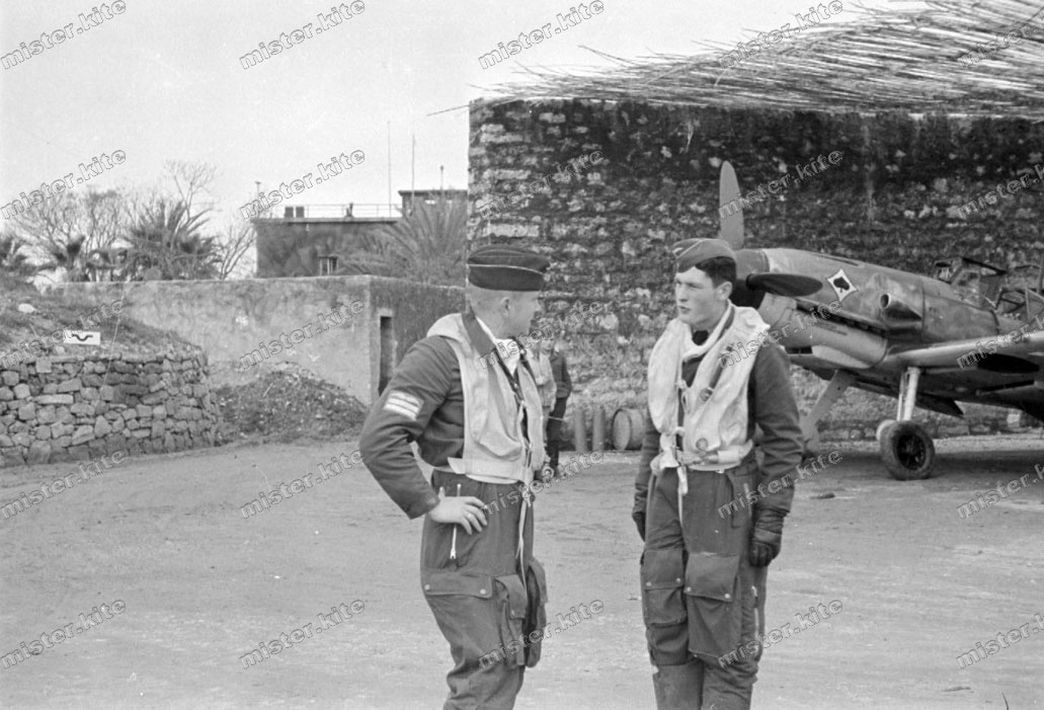 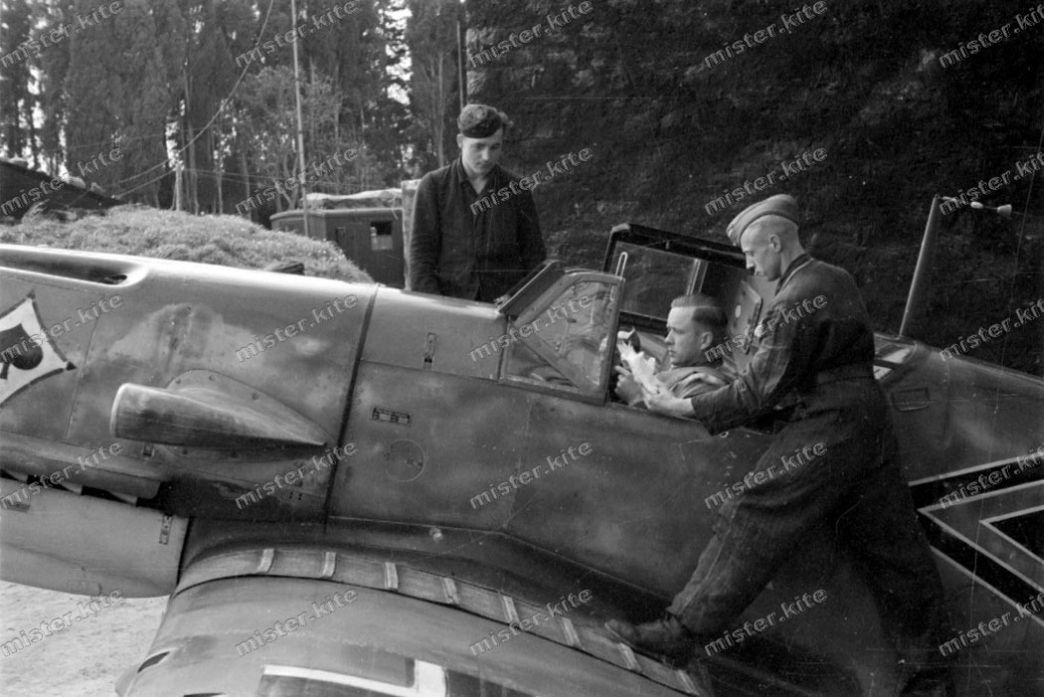 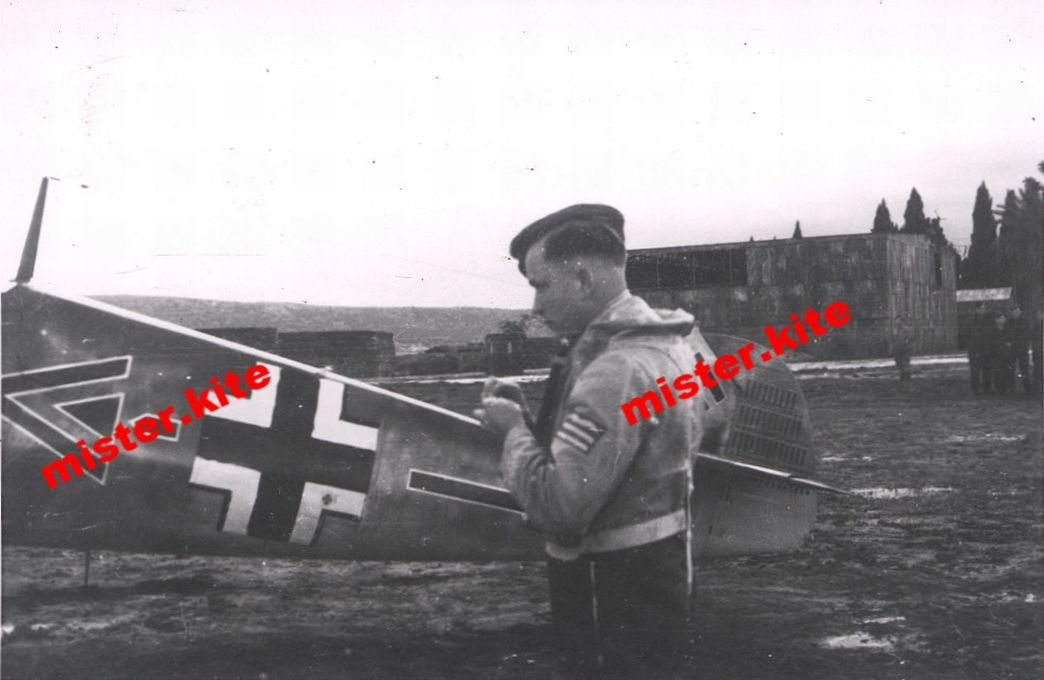 Well done. I'll go through my books for one of his E models

And one more shot confirmed the band at the tail. 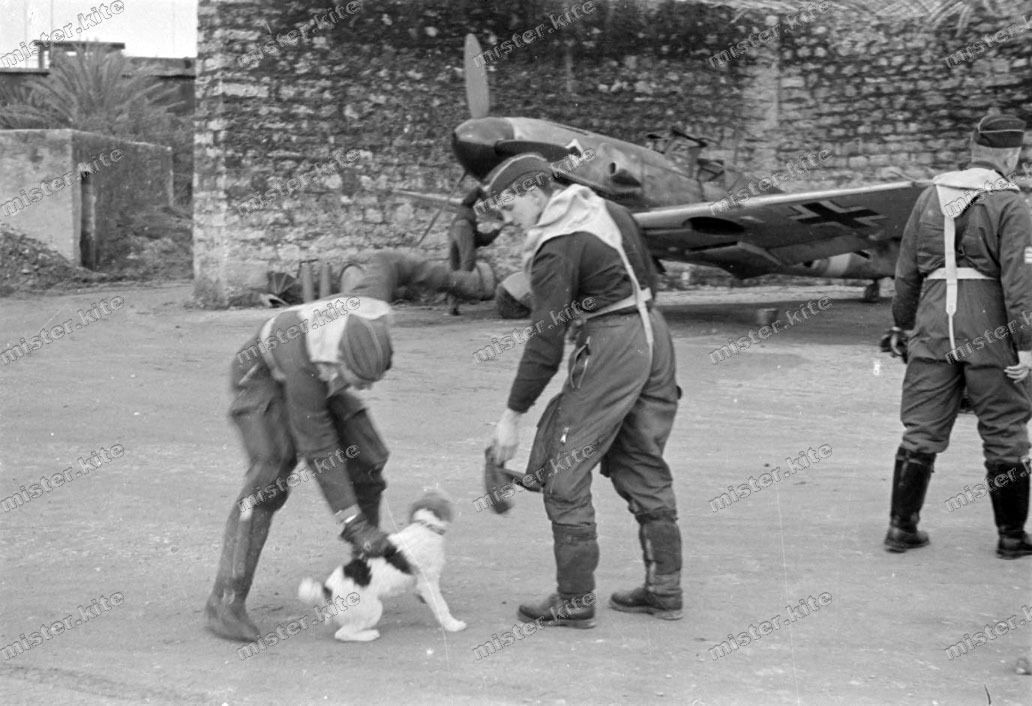 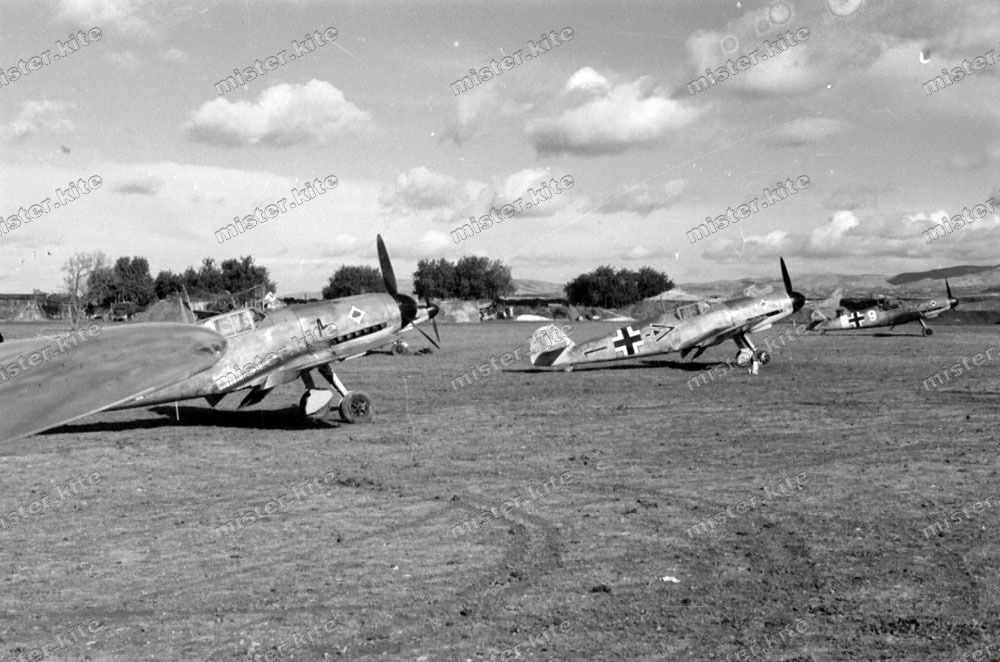 the enlarged piece of the shot above .. 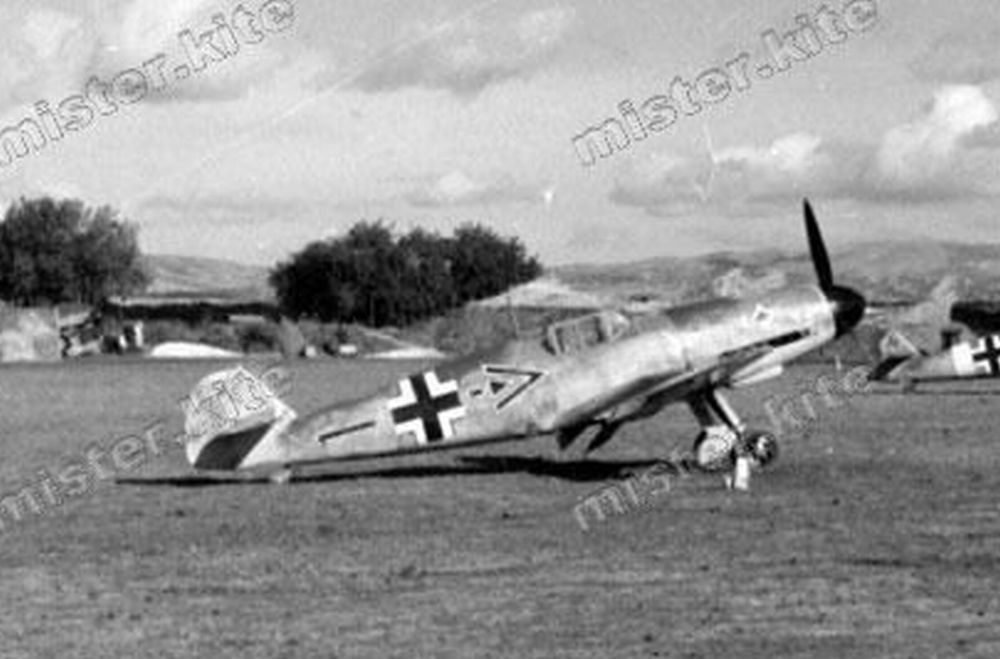 BWitt PM sent. You too my friend 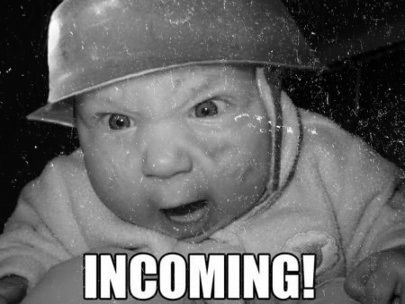 I appreciate the images, Wurger. Seen some of them but difficult to find them when you need them.
I must be overanalyzing everything here because unless the craft were repainted multiple times, I still do not feel fully confident of how to represent what was filmed on his 400th flight.

The last image in the first set of images looks like the rudder has been painted with 50 tallies. His 50th on a Hurricane was 19.12.1941 and the 51st on a Hurricane on 21.12.1941 which would date that image to that time. This would have been what he was flying when he first arrived at Comiso having landed there only on December 15th.

The images of von Maltzahn in front of the stone wall pen with the 109 in it looks to be his craft. The young pilot with dark hair he is talking with is Karl-Heinz Preu who was killed over Malta on 7.7.1942. The thick white band on the fuselage is in contact with the balkenkreuz which I have seen with other Stab craft at Comiso. It also appears that a 1/4 of the spinner which is opposite to the photographer is white while the rest is black.

As memo serves the screenshot you posted above is a frame of "Die Deutsche Wochenschau" newsreel propaganda series released in the cinemas of Nazi Germany from June 1940 until the end of World War II. The copy of the chronicale must have been taken long time ago before computers were able to count to eight. For sure it is not digitalized source film. What is more, because it is the propaganda film it may be not the event that was stated in the film. Watching many of the "Die Deutsche Wochenschau" editions I noticed they liked taking two/three or sometimes more pieces from different events and put together in order to show how skilful and brave the Nazi German Armed Forces were. Additionally , many filmed events were just engineered for the propaganda movies using the different stuff than the one being used really at thet time.

Actaully I don't think the aircrfat was repainted. The appearance of the kite has been caused just by the poor quality of the film. It is quite common that many details are lost in such copies. The images are overexposed usually. The engine cowling wasn't of the yellow overall rather. The kind of quick ID marking was used for the Eastern Front but not for the MTO where the white was the colour. Certainly if the plane had been used on the Ostfront before moving to the MTO it could retain the previous morkings but these were overpaited/changed quickly. But having the new Friedrich planes the repainting wasn't needed. The camo mottling really looks like being of the light type. If you have a very close up wiew at the shot you will find more darker camo spots there. Regarding the white portion of the spinner ... also non standard one. It looks like the spinner with the overpainted front part that was white while tha back ring was dark. Of course the spiral has been omitted because it is not the case. See the pics below.

and here another JG53 kite in the North Africa .. Undoubtedly the ETO camo with quite light mottling or faded rather because of the sunlight. 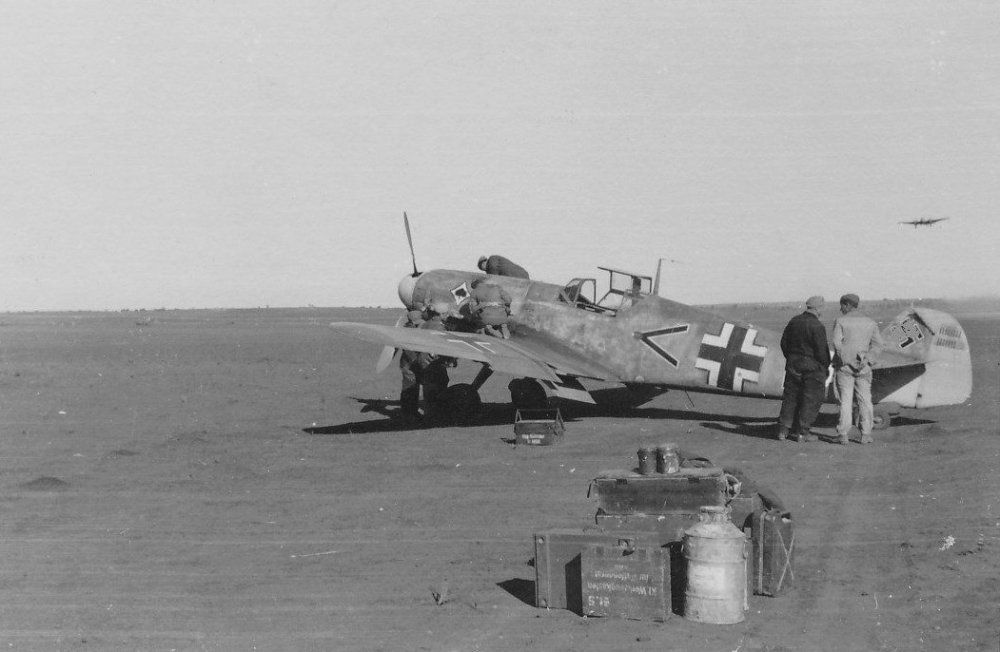 the source: the net.
You must log in or register to reply here.

P
The W/T stencils on Hurricanes

? on Color of Cockpit Interior of Me 410 at Cosford