Thinking of building the ancient 1/72 Frog Spirit of St. Louis I've had in the stash for years. It's obviously crude and in need of detailing.

How would folks approach replicating this finish on the nose: https://airandspace.si.edu/multimedia-gallery/2001-137hjpg
It appears to be hammered aluminum, certainly weathered after all these years.. How to get that pattern... Perhaps create a decal?
Ideas appreciated...

BTW, has there ever been another kit of this A/C? Maybe an ancient Hawk model? Did Glencoe re-release a Lindberg kit, or something else? Williams Bros?
There doesn't seem to be much interest in the pioneering days of aviation anymore.
Where did the molds for all those Hawk 30s racers go? Gee Bee, Laird Solution, etc.

Not sure how to replicate the cowl's look on a scale model, but the material wasn't hammered, it was machined. Gunsmith call that "jeweling".

Perhaps coat a test piece with Alclad and use something with a small diameter that's slightly abrasive like a cotton swab (Q-tip) and give it a few turns. This may make a "swirl" in the finish.

I used to create that look on stainless steel with a small diameter polishing wheel on a die-grinder and jeweler's rouge.
C

Picked this up on Wikipedia which would explain the colouring:

The Spirit of St. Louis appears today much as it appeared on its accession into the Smithsonian collection in 1928, except that the gold color of the aircraft's aluminum nose panels is an artifact of well-intended early conservation efforts: Not long after the museum took possession of the Spirit, conservators applied a clear layer of varnish or shellac to the forward panels in an attempt to preserve the flags and other artwork painted on the engine cowling. This protective coating has yellowed with age, resulting in the golden hue seen today. Smithsonian officials at some point planned to remove the varnish and restore the nose panels to their original silver appearance when the aircraft was to be taken down for conservation,[17] but later decided that the golden hue on the engine cowling will remain, as it is part of the aircraft's natural state after acquisition and during its years on display. The effort to preserve artifacts is not to alter them but to maintain them as much as possible in the state in which the Smithsonian acquired them.

As for the markings, the aluminium panels look to have been burnished by hand as the pattern is not consistent as would be with a machine and to replicate this on a model would be next to impossible without custom made decals.

Here is a pic showing the procedure of making the aluminium plate finished with the pattern. It was made with a rotating brush.

As memo serves a such effect can be achieved with painting the small spots with a brush and the metalic paints like Chrome as the background and matt aluminium for the circles. The idea of declas also sounds good. It would be enough to print the spots/circles on the clear decal sheet and then apply on the painted Chrome background.

Painting job was quite simple, whole aircraft was sprayed with GSI C8 Silver, the nose was masked and sprayed with GSI C157 Super Silver. Then I took a soft pencil no. 8B and just drew small circles on the super silver surface. After that a high gloss varnish was sprayed, I think it looks quite satysfying to this scale…
Click to expand...

And the effect gained with decals ... 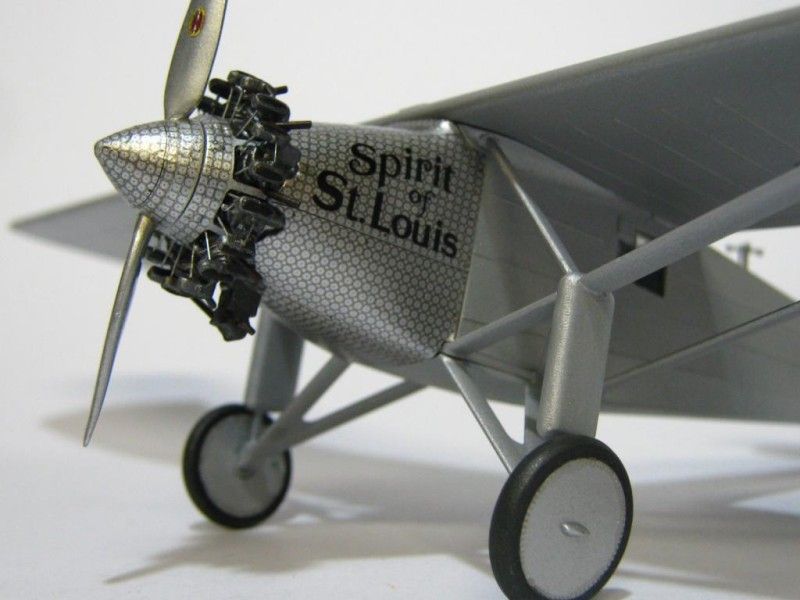 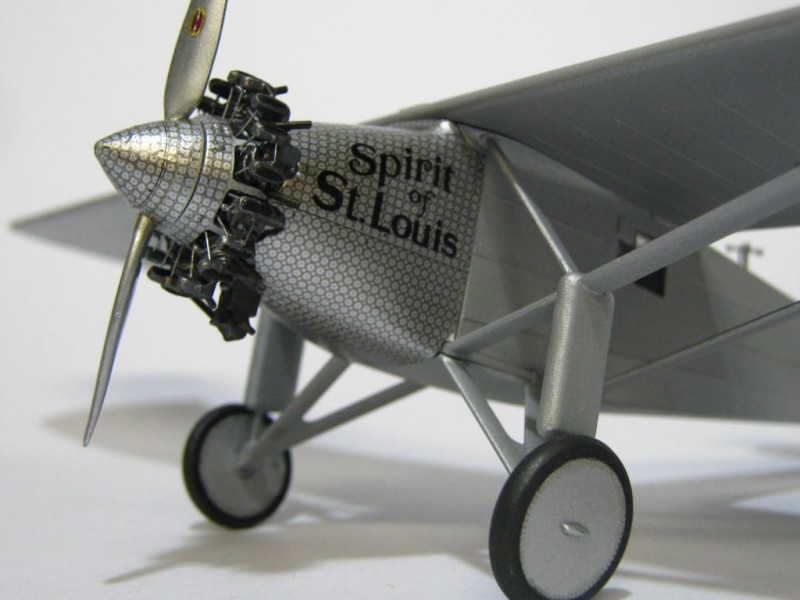 By Morne Meyer - In 1926 Charles Lindbergh, as a young airmail pilot for Robertson Aircraft Corporation, dreamt of flying the Atlantic in order to capture the elusive Orteig Prize of $ 25 000. This prize was sponsored by the prominent New York Hotel businessman Raymond Orteig for the first...

On flying models, the look was achieved with a pencil and jewelers rouge on the eraser.
As a thread drift, in 1943 when the "Spirit" had been lowered for cleaning, my father got one of the men to sit me in the seat. As I was 2 1/2, I of course have no memory of it.
D

Thanks to all for the great ideas! I think I will test a few on a beater first... I don't think I could consistently draw tiny circles like that though.
Maybe I will try making decals. Wouldn't need too many.

Dave Goessling said:
Thanks to all for the great ideas! I think I will test a few on a beater first... I don't think I could consistently draw tiny circles like that though.
Maybe I will try making decals. Wouldn't need too many.
Click to expand...

Instead of the brush painted circles you may try to a paper template with round holes. Just a kind of masking ...
You must log in or register to reply here.

A
how did you avoided the trap of eduard Fw 190 D9 model?

1/32 Lanc Wingnut wings too much stress?

My method of repairing, cleaning and polishing clear parts