The benifits of the BMW 801 oil cooling system?

Overall, I like the FW-190A series as a fighter, but one "feature" has me EXTREMELY puzzled. The oil cooler.

Now, im sure all of you know, most radial (or air cooled) aircraft engines had a separate oil cooler. Typically placed in the chin (A6M, P-47, LA-5) or in the wings (F4U, Sea Fury). The FW-190A series had an extremely complex and very heavy oil cooling system, and I simply cant find the logic behind it. First, let me catch up those who are not familure with the 801's oil cooler.

In the front of the engine, just aft of the ducted fan, is a ring around the inside of the cowling. Thats the oil cooler. Here I highlighted it in red.

Also note the fan just behind the prop (3). That also helps dump air into the oil cooler, along with keeping the cylinders cool. Also, the air from the fan, had to travel and S bend to get to the cooler. Any time you change the direction of air, you impart drag and friction/resistance. So the air had to turn 180 degrees twice.

Now, since the oil cooler was so massive, and in a very vulnerable place, they armored it with between 1/3 to 1/8th " armor plate (depending on the model, and my numbers are from memory, but im sure someone will correct me).

Now, my question is, was all this added weight really worth the slight aerodynamic benefit? First, you have the added weight of the cooler, then the added weight of the armor plating, and then the ducted fan. With a standard cowling like that on most radial engine fighters, Kurt Tank would of saved a massive amount of weight! Also, the cooling fan dragged a bit of HP from the engine since it spun 1/3 faster then the prop.

I simply cant understand the logic of such a heavy and complex system. My only guess is it has something to do with the FW-190V1. In the late 1930's, there was a massive push for streamlining, and radial engines on a fighter was deemed to be not adequate for fighters due to its large frontal area. Then the NACA cowling came along and changed things a little. In looking at the early FW-190V1 with the ducted spinner, Kurt Tank was trying to make an extremely streamlined radial fighter. In that, his complex oil cooler is streamlined. But, it didnt work out so well, due to heat. They had to remove the cowled spinner and adopt a more standard cowling, but for some reason, kept the oil cooler ring.

Now, what puzzles me is that if it truly was an innovation with notable gains, why was it not copied? Lets face it. In the late 30's it was a true golden age of aviation innovation. Every great discovery was adapted and copied to the next line of fighters. NACA cowling, flush rivits, constant speed props, you name it, it was copied and crammed into the next fighter. Everything but this oil cooler ring. The Japanese did copy the ducted fan on a few prototypes, and the J2M series, but stayed with a standard oil cooler. Also, many aircraft had the large spinner, but not the ducted fan, like the LA5 and Sea Fury. Even the prototype F4F had a large spinner.

So, with all the weight, drag on the engine, and such, was the FW-190A BMW801 oil cooler ring really worth it? Did its aerodynamic benefits outweigh the cost in weight and resistance?
C

The 801 had a reduced drag that was considered to be below that of an equivalent liquid-cooled powerplant, the cowling that was designed around it by the BMW design team gave little away. There were always going to be pioneering difficulties with this type of no-margin design and BMW certainly encountered them.
The cooling ring was used in conjunction with clever baffling to create a forced airflow through the engine that incorporated the second row of cylinders, these were the principal culprits in the overheating problem, suffering run-away head temperatures that could and did lead to engine fires; the cooling ring was principally to aid in the cooling of the engine at taxying and ground-running conditions.
The oil cooler matrix was served far more efficiently by the forward motion of the aircraft in flight, as were the cooling requirements of the rest of the engine.

Bristol found the exact-same conditions when incorporating the cooling fan onto their Hercules powerplant.

The 801D was mounted on longer engine mounts, this increased the length of the aircraft by 5ins (12.7cms) and did improve cooling (as well as meaning cooler feet for the pilot).

With the cooling issue largely solved, BMW went on to refine the cowled 801 right up until the war's end, achieving further savings of between 150-200hp in reduced drag and the unit was generally regarded as an excellent operational powerplant.

Given the tight tolerances that Tank was pursuing between powerplant and cowling, where would the oil cooler system be housed as an alternative? I don't think leading-edge installations were viable due to the favoured use of wing-root armament by the Luftwaffe.

Some additional pictorial info on the cooling arrangement:

One alternate location would of been under the engine in the chin. Like many of the Japanese aircraft including the J2M series. The J2M had an extreamly streamlined coweling, large spinner, and the ducted fan, but opted for a more standard approach to oil cooling. 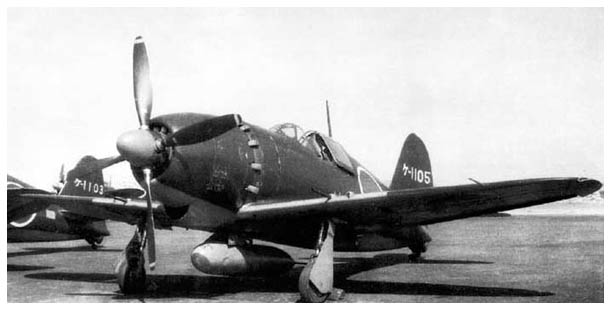 Could we put this into a 'German WWII over-engineering' basket ?

The BMW 801 was designd as as "Poweregg" , in German Motoranlage. It means, you could install the Motoranlage on different types of aircraft without changing parts. For engine changing you need only about two hours and three men. That is one reasons that sometime german engines look over-engineerd
G

Very good point. The 801 powered Ju-88 used the same power egg! So it all had to fit within the cowling to make it adaptable to other designs, since a chin mounted cooler could interfere with something on other designs. Im guessing the size of the cooler had to do more with cooling that back row of cylinder heads. Thanks for the new perspective!


Dolpho said:
The BMW 801 was designd as as "Poweregg" , in German Motoranlage. It means, you could install the Motoranlage on different types of aircraft without changing parts. For engine changing you need only about two hours and three men. That is one reasons that sometime german engines look over-engineerd
Click to expand...

Gibbage said:
Im guessing the size of the cooler had to do more with cooling that back row of cylinder heads. Thanks for the new perspective!
Click to expand...

It all depends on how you route the oil. If your dumping the cooled oil into the back row first, then it gets more cooling then the front row. I dont know how the oil is routed though.
D

Hi Dolpho
that looks like it could be useful, any chance you could shrink it to 800 pixels?
J

Quite a lot of insight into why the BMW engineers decided to place the oil radiator in the front of the engine cowling can be gained from a study of the patent filed by BMW in 1937, parts of which are reproduced below.
According to the text of the patent, (which is, of course, a first-hand account written by the BMW engineers), there were three reasons for locating the oil radiator in the nose, namely, 1/ to reduce the air resitance of the radiator to a minimum, 2/ to provide a flow of hot air from behind the cylinders to the radiator to allow rapid warm-up after starting and
3/ to provide a flow of cool air to the radiator during normal operation.
As can be seen in the drawing, the flows of hot and cold air could be controlled by valves and a thermostat to maintain ideal temperatures.
The BMW people probably found that with the two-row 801 engine that they didn't need to duct hot air to the radiator as the engine produced more than enough heat under the close fitting cowlings!
None the less, this patent does summarize the ideas prevalent at BMW during the time the use of radial engines was being considered for high speed applications.

Gibbage said:
he FW-190A series had an extremely complex and very heavy oil cooling system, and I simply cant find the logic behind it.
Click to expand...

First of all, I can't see the evidence that it was 'extremely heavy' - any figures and comparisons with other radial engined aircraft?
H

I think the resurgent Luftwaffe of the 1930s was very big on quick engine changes. In July of 1938 Al Williams, a USMC pilot touring Europe with a Grumman Gulfhawk, reported that the engine in a Bf 109D could be "removed and replaced - ready to go- inside of twelve minutes." A power egg seems to me to be the only way to do this.

Did they really test the Alfa Romeo 135 against the BMW 801?

C
Engine control Kommandogerät for BMW 801s in aircraft other than Fw 190?
2

The Case Against The Float Carburettor