He´s born in Curitiba, Brazil in 1921. He´s the only brazilian to participate in D Day. 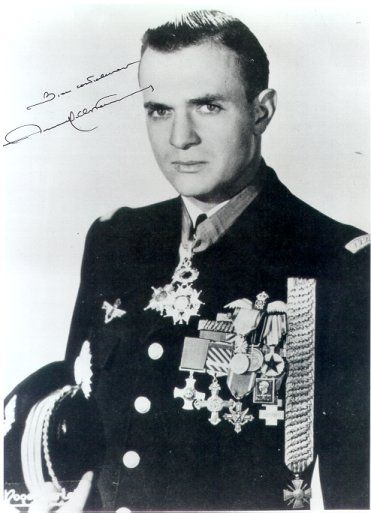 If one instantly relates the name of an individual to the Free French Air Forces during WWII it is Pierre Closterman, who entered the legend during his life time. He had a total of 33 air victories won during 293 long range offensive war missions, 97 assault and dive-bombing missions, and 42 defensive fighter missions.

Born in Curibita, Brazil, in 1921, and son of a diplomat, he soon got a strong interest in aviation, thanks to the famous personalities who made the story of the Aéropostale. He learned to fly in Brazil and started a career as a writer of aviation articles. He followed the events taking place in Europe: The phony war, and France's defeat. Pierre Closterman was so upset that he decided to join the Free French Forces which gathered in England, thanks to a certain Général de Gaulle. After a few difficulties to get his French nationality recognised by the authorities, he got a commission with the pilot who became his friend for ever, Jacques Remlinger.

In 1942, he is a student pilot in the Royal Air Force school in Cranwell and moves to Rednal for a conversion course on Spitfire before getting posted to a Squadron based in Turnhouse where, under the orders of Commander Mouchotte, the Groupe "Alsace" is formed. The 341 Squadron "ALSACE" is quickly posted to Biggin Hill in the south of London and receives Spitfire IX with a Rolls Royce 63 engine. This base was reserved for the best RAF Squadrons. On September 28, 1943, Closterman leaves Biggin Hill and the Groupe "Alsace" with whom he got his first aerial victories. He joins the 602 "City of Glasgow" Squadron composed of Scotmen of course, but also New-Zealanders, Canadians, two Frenchmen, and a few British ones.

In January 1944, the 602 moves to the Orcades islands. After B17 escort missions, the task of the 602 is to avoid any attempt of bombardment and reconnaissance missions by the Luftwaffe. The group operates seven or eight Spitfire V and four Spitfire VIII, stratospheric, with an extended wing span, a Rolls Royce 67 engine with a double compressor, and semi-pressurised cockpit. In April 1944, flying Spitfire IX B, Pierre Closterman and the "City of Glasgow", operating from the airfield of Detling, start dive-bombing the V1 sites. On May 4, 1944, Squadron 125 moves from Detling to Ford, near Brighton, in view of preparing the Normandy Landing. On "D" Day, Closterman has to wait until the afternoon to fly his first mission over Normandy.

On June 11, 1944, Closterman and Remlinger receive the order, from Captain Sutherland, to be the first ones to land in France. Their first night is spent under the bombs dropped by Junkers 88 aircraft. Pierre Closterman receives the Distinguished Flying Cross from the hands of Sir Archibald Sinclair, the British Air Minister. Nervous and exhausted, he learns that he is withdrawn from active operations. On July 7, he boards a tank carrier for England. He spends three months at Headquarters and, despite the authorities reticence, he decides to go back to active duty. He is posted to Aston-Down where he gets a quick conversion course on Typhoon and Tempest.

After 300 war missions, Closterman starts again with Wing 122 where he takes the command of Flight A of Squadron 274 based in Volkel, Holland. The morale is very low because the losses are high in these early days of year 1945. Two types of missions were allocated to the Tempest : To neutralise the German fighters, and, especially, the jet fighters, To stop the day activity of the German railway system from the Rhine to Berlin, by systematically attacking the locomotives. On March 30, 1945, after an 8 days rest period, consecutive to a wound, Pierre Closterman returns to Volkel where he takes the command on the Wing 122 number 3 Squadron. He soon accomplishes his dream of becoming the leader of Wing 122, one of the elite fighter units.

On August 27, 1945, his request to be demobilised is accepted. After the war, Pierre Closterman was elected 8 times as a Deputy in the National Assembly, and he became the Director of Cessna aircraft for France. He was well known as a writer too.
Click to expand...

sorry but I already posted this in the morning in aviation......


Erich said:
sorry but I already posted this in the morning in aviation......
Click to expand...

A
How to prevent the 1943 Bengal famine