I was intrigued by this news found in the "newspaper" within the game "IL-2 Sturmovik - Great Battles". I have not been able to find any historical confirmation: I wonder if there is some truth or is it pure fantasy. Can you help me?

Actually I haven't heard of a such newspaper published in the USSR during the war. IMHO, the one should be titled "На страже Родины". To be honest, it means exactly the same what the " На страже Отечества". It is one of the oldest newspapers issued in the Russia. I haven't found a such title on the soviet war newspapers list. So it could be just for the game only. The "На страже Родины" newspaper looked in 1943 like that one below ... here the four consecutive numers of the newspaper ( 95,96,97,98) released on 24th ,25th ,27th and 28th April 1943. As you may notice the newspaper wasn't issued on the 26th April 1943. 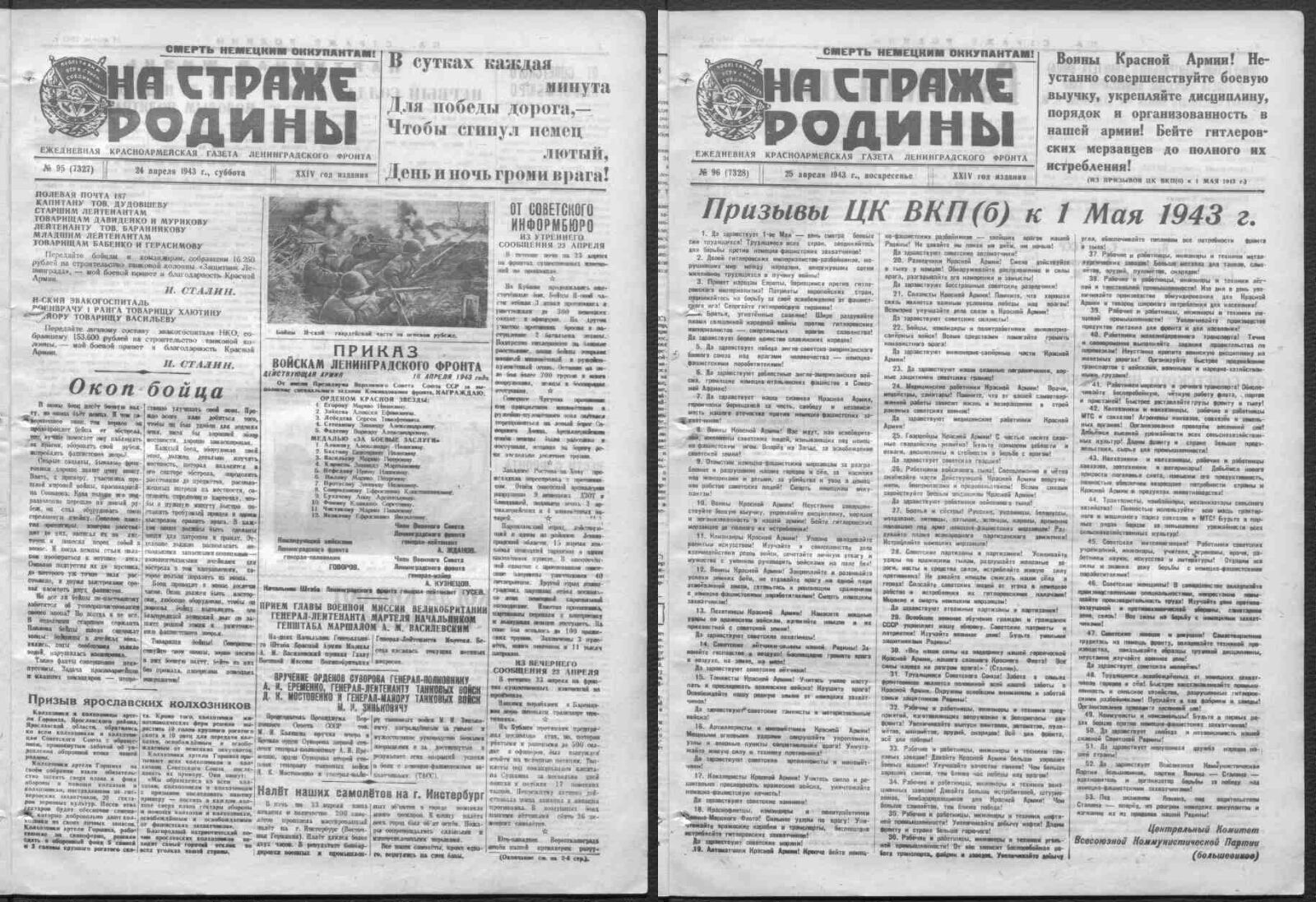 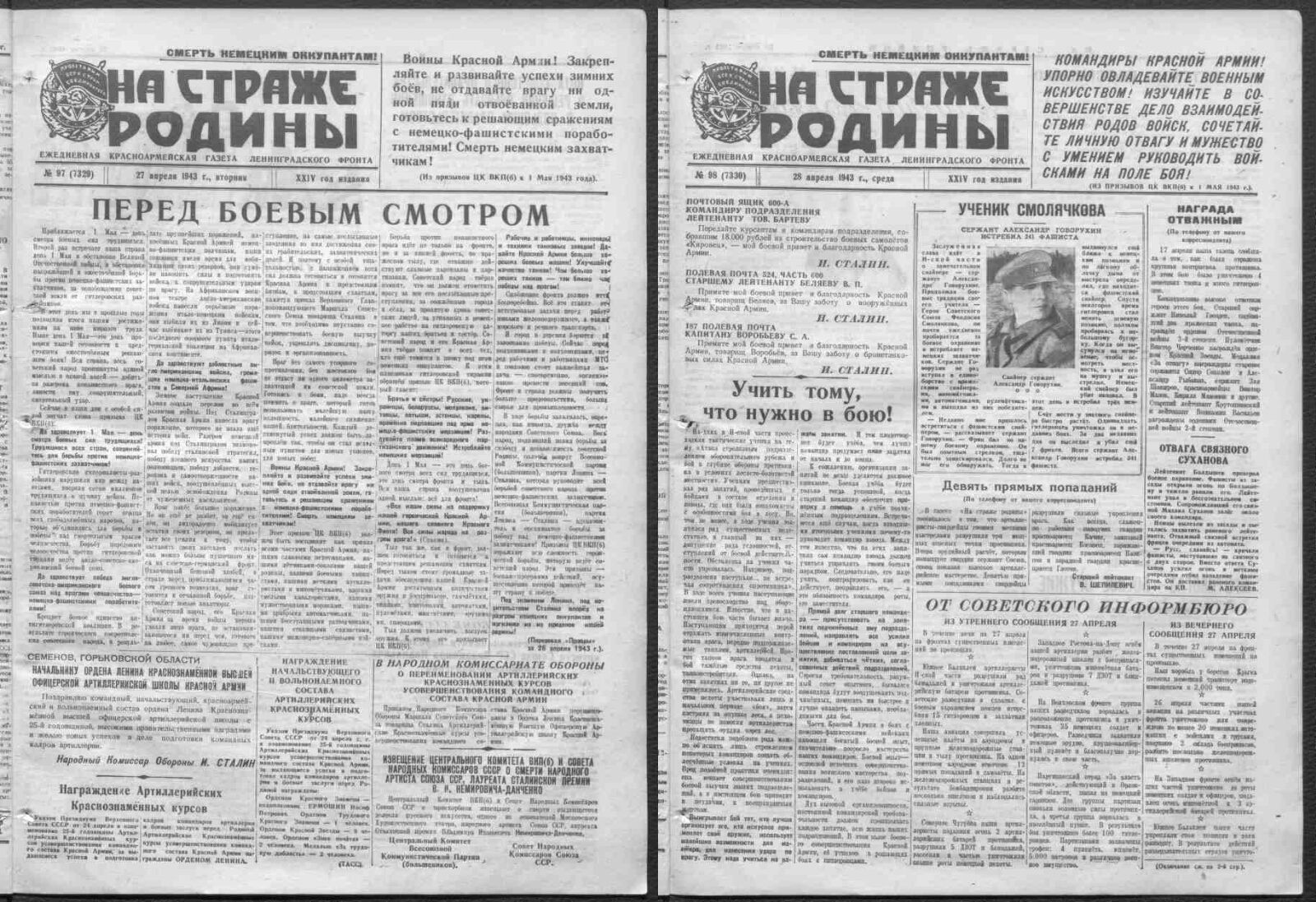 Regarding the riots ... why they would do that if the Sweden was pre-German at least until the mid of the 1943 ? No reasan for that I think.

Thanks for the reply. I believe that the "newspaper" of the simulator is an invention aimed at the game. However, it is likely, and I find historical confirmation for all the other news (e.g. see attached date of the launch of the aircraft carrier Intrepid). My question, therefore, was precisely about the veracity of the news on the pro-German uprisings in Sweden; everything I find now concerning Sweden during the Second World War seems to indicate an aversion of the people and the Swedish government of the time against Nazism. If the news were true, however, it would reveal sympathies, at least popular, towards Germany at the time.

I see. Regarding the Nazism and the Swedish sympathies , I would say these were just the same like in other countries. Many people were pro and many anti.. People are people but Governemnts and politics are the the other side of the coin. In the summer of the 1943 Sweden Government started introducing limits to the help, trading, traffic in the air and at see, etc ... for the Germany. But I don't think it would be the reason for rioting although there could be still a considerable number of sympathetics for the cooperation with Nazis. Especially they could be invaded by the Hitler's troops from Finland and Norway. Anyway , I haven't heard about the riots in Sweden for the reason. IMHO

Lucky13 could shed some light on.

Thank you, you have brought the subject into focus. I hope to know more about the alleged riots.

Going by memory, there were actually a few occasions when riots broke out in Sweden between pro-nazi and anti-nazi groups.
The one such occasion that I recall, was early 1945, in Uppsala.

One of these confrontations may be the basis of the newspaper graphic in the sim.

GrauGeist said:
Going by memory, there were actually a few occasions when riots broke out in Sweden between pro-nazi and anti-nazi groups.
The one such occasion that I recall, was early 1945, in Uppsala.

One of these confrontations may be the basis of the newspaper graphic in the sim.
Click to expand...

Thank you! Now I have confirmation that there are historical bases for this event as well. Wurger outlined the possible reasons for this.
T

There were demonstrations and occasional violent confrontations between pro-German groups and anti-German/pro-communism groups during the war. Whether what is referred to in the 1943 constituted a riot or not may be the question. As GrauGeist mentioned above there was a rather large confrontation at the end of the war in Europe.

My grandmother's sister's husband was from Sweden, and he made the comment several times that his relatives still in Sweden during the war were upset/angry with the pro-German movement. I do not know if his relatives were actually pro-communism, but they were definitely pro-socialism.

"When the war broke out, the former Youth League received a boost. The SNF's activities increased and membership soared. Its vogue proved short-lived, and opposition increased. Demonstrators showed up to its meetings and fighting was common. After a meeting in Uppsala on May 4, 1945, the police were unable to hold the crowds apart and rioting broke out."

Also, since that "news" artical appears is English, it's hard to tell the intent of their meaning.
Russian (and most Cyrillic speaking countries) use the same word for riot as they do for disorder or civil disturbance like an unruly crowd.

In the English speaking world, when we hear the word riot, it's usually applied to a major situation where there's massed crowds and civil unrest.
E

listen)) is a nationalist and right-wing populist political party in Sweden.[2][3][6] As of 2022, it is the largest member of Sweden's right-wing governing bloc to which it provides confidence and supply, and is the second largest party in the Riksdag.[19][20] The party describes itself as social conservative with a nationalist foundation.[4][5] The party has also been variously characterised by academics, political commentators, and media as national-conservative,[3][2] anti-immigration,[3][7][21] anti-Islam,[22] Eurosceptic,[9][11][23] and far-right.[15][24] The Sweden Democrats reject the far-right label, saying that it no longer represents the party's political beliefs.[25] Founded in 1988, the Sweden Democrats originally had its roots in Swedish fascism,[26][27][28] as well as white nationalism,[29][30] but they began distancing itself from its past during the late 1990s and early 2000s.[3][29] Under the leadership of Jimmie Åkesson since 2005, the SD underwent a process of reform by expelling hardline members and moderating its platform. Today, the Sweden Democrats officially reject both fascism and Nazism on their platform.[3]

"Officially"
You must log in or register to reply here.

A
How to prevent the 1943 Bengal famine

September 1939, the German invasion of Poland