Another aircraft from the 405th Fighter Group, 9th USAAF, this time a late "bubbletop", with the added fin fillet and Curtiss Electric "paddle blade" prop.


Pics of the box art below, and the profile from the Eagle Strike "American Jabos Part V" decal sheet.
The pilot's name is unknown, and I have yet to find photos of the aircraft in my many P-47 books or an internet search, but I'm still looking.
Given that I get my "razorback" finished, I hope to make a start on this in early January. 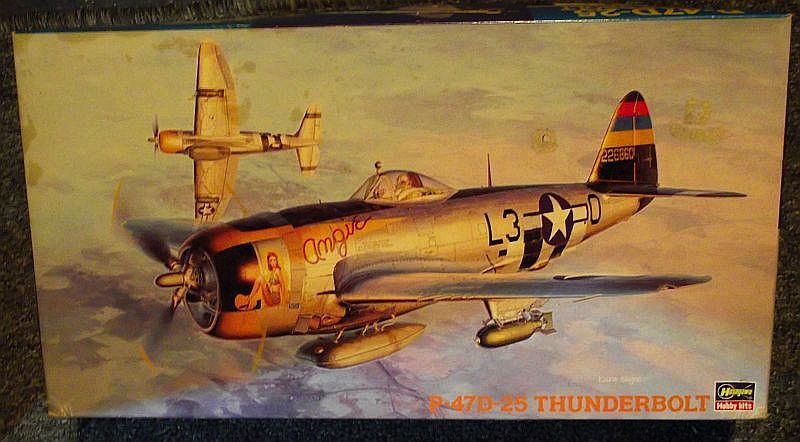 Good to see you at it Terry, just getting in the door myself...

I had a bit of a nagging doubt concerning a couple of details regarding the P-47D-30 series, so did some further research.
From the Block -30 onwards, the cockpit floor was "flat", and not corrugated as on previous models, but this can easily be rectified on the kit parts.
Although the fin fillet became standard from the Block-40 series, it was also retro-fitted to the Block-30, so I can go ahead and use the spare parts from the Hasegawa Block-25 kit.
I will need to scratch-build some compressibility flaps for the underside of the wings, as these were fitted from Block-30 onwards.
And finally, I had intended to use the excellent "Yahu" instrument panel in this build but, due to possible fit requirements, I may have to use the Eduard panel instead - I'll know more when I get to that stage. If so, then the "Yahu" panel can be used for a further build, with the Hasegawa P-47D-25 kit. 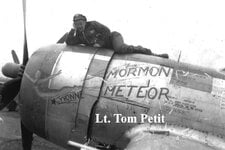 EDIT:- I've just checked the 405th FG site again, and although there isn't a photo, "Mormon Meteor IV / Flying Jenny" is listed, with the same serial number and codes as provided on the decal sheet, so I'll go with that.
Last edited: Dec 25, 2022

Good choice for markings. USAAF 9th Airforce aircraft had some of the most interesting paint schemes.

Great to see you on a roll Terry.

Done some more research, and discovered that the K-14 gunsight wasn't introduced until the P-47D-40, with the Mk.VIII sight being fitted to the D-30.
Consequently, I've decided to use the Hasegawa kit, in place of the Academy kit, and the header, and other details for the first post have been edited accordingly. Although I could have used the Academy kit, as altering the floor would be easier, and the Mk.VIII sight is included as an optional part, the instrument panel in the Hasegawa kit, and the method of attaching it, will allow me to use the Yahu instrument panel designed for late P-47 variants.
The Academy kit will eventually be built as a D-25 from the 56th FG.
Given I can get my "razorback" finished by, or over, the coming weekend, i hope to make a start on this build by early next week.

Terry, my cockpit in the basement is based on a -30 and is pretty correct except for the color and the gun sight (a K-14 was what I could get).
I'm not sure what the Yahu instrument panel looks like but the -30 had a completely different panel then previously blocks with a different overall shape and the instruments arranged in more even horizontal lines.

Thanks for the info Glen.
The Yahu panels are described as "early" and "late", and it'll be the "late" version I'll be using. (pics below), with the "early" panels being used on razorbacks. The last pic is the "late" panel.
I also have an Eduard panel, to be used on a D-25. Although these may not ne totally accurate for the chosen builds, they'll have to do. 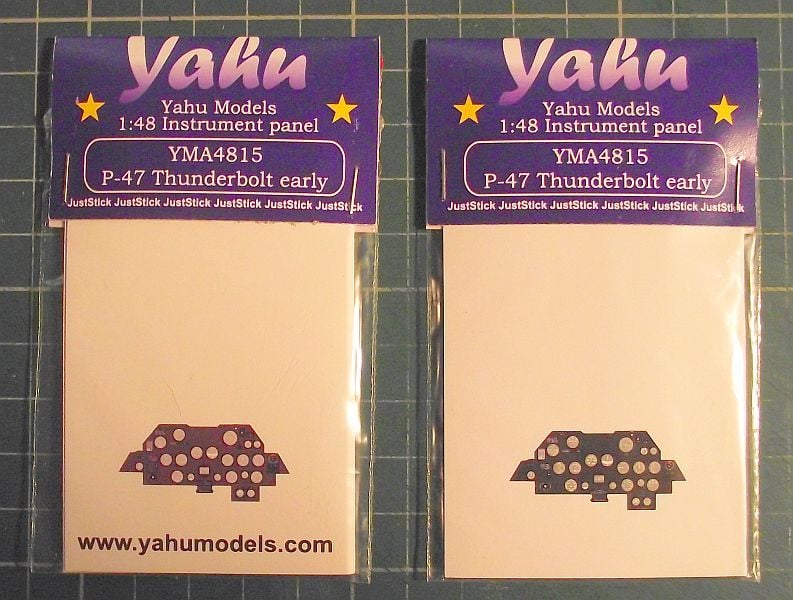 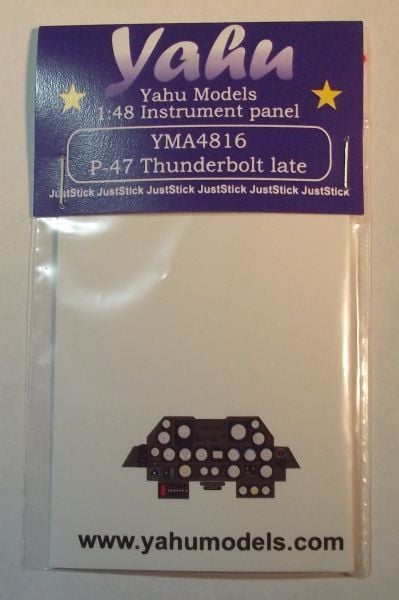 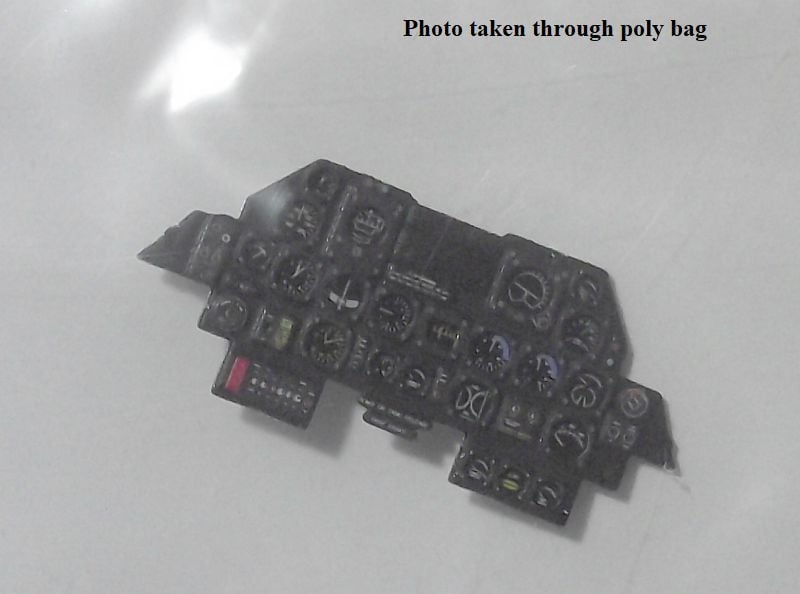 I always thought the PE parts were quite an advancement in modelling but these 3D parts are quite amazing and what a change in technology we oldies have seen over the years.

I agree Vic. I thought the Eduard PE parts were a huge step forward, but these Yahu panels are just amazing. Although I haven't (yet) used any 3D decal panels, from what I've seen they're not quite as good as the Yahu, and also cost almost twice as much.

Thanks for the confirmation Glenn. That pic through the poly bag doesn't do justice to the panel - when viewed normally, it's totally incredible.

With my "razorback" now finished, it's time to start on the "bubble top", with some changes to the kit parts in the cockpit, and some scratch-building of parts such as the trim wheel and oxygen regulator. The corrugated floor also needs to be "plated" over, as a smooth, or "flat" floor was introduced from the D-30 onwards.
The kit instrument panel needs to be filed and sanded flat, in order to fit the incredibly detailed "Yahu" panel, and some minor mods done to be able to fit the "Quickboost" resin seat, which itself needs some minor mods to the harness arrangement, which will be explained later in the build.
The pics below sow some of the cockpit parts and the replacement seat and panel, and I intend to start work later tonight - if my nose stops dripping with this darned cold ! 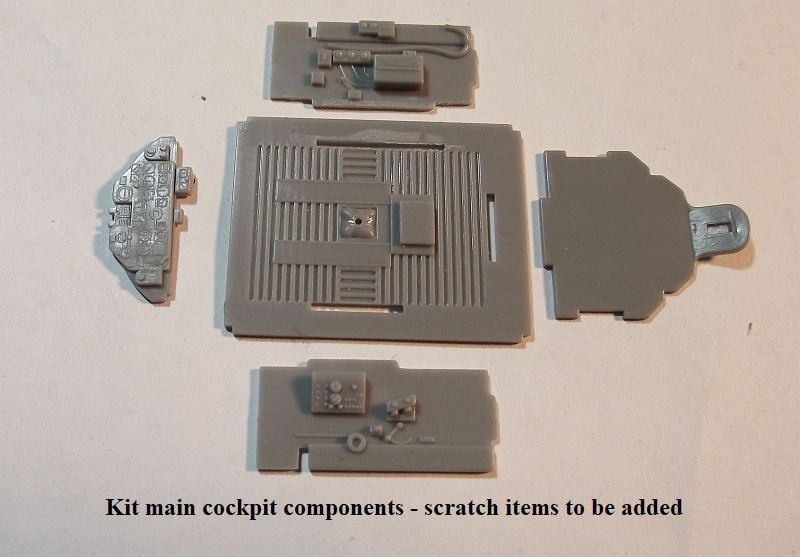 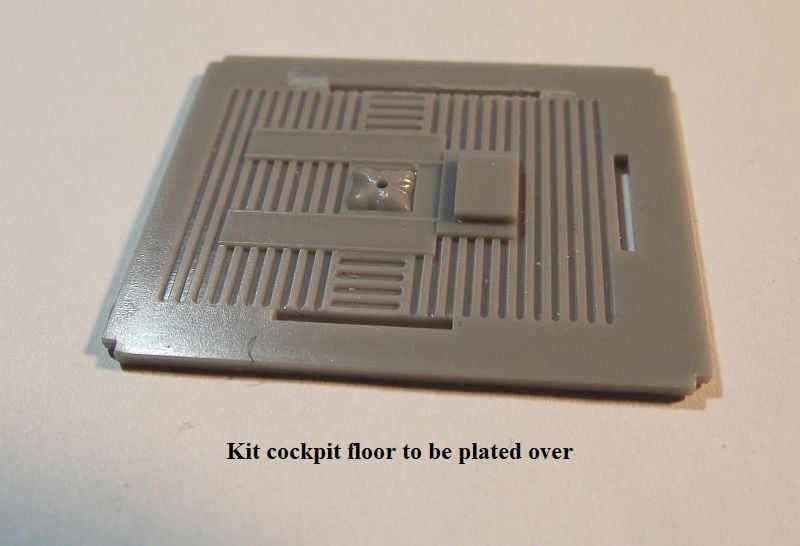 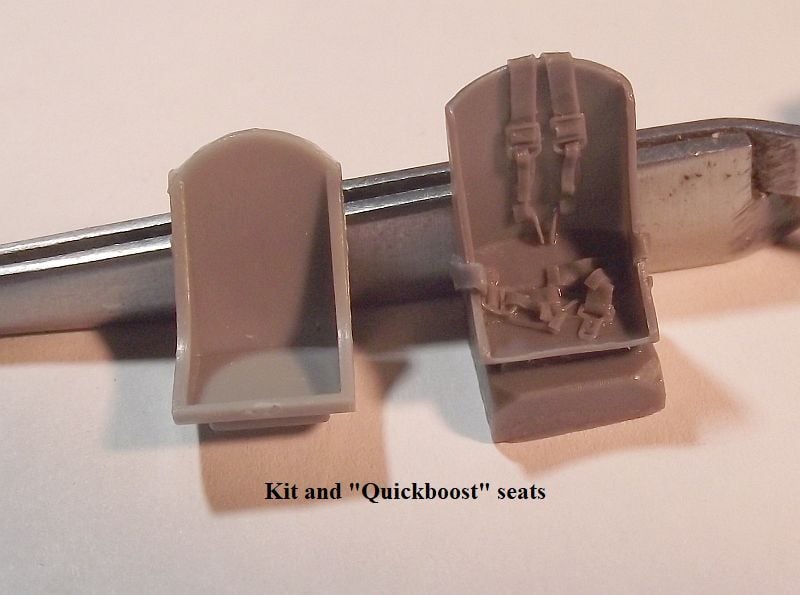 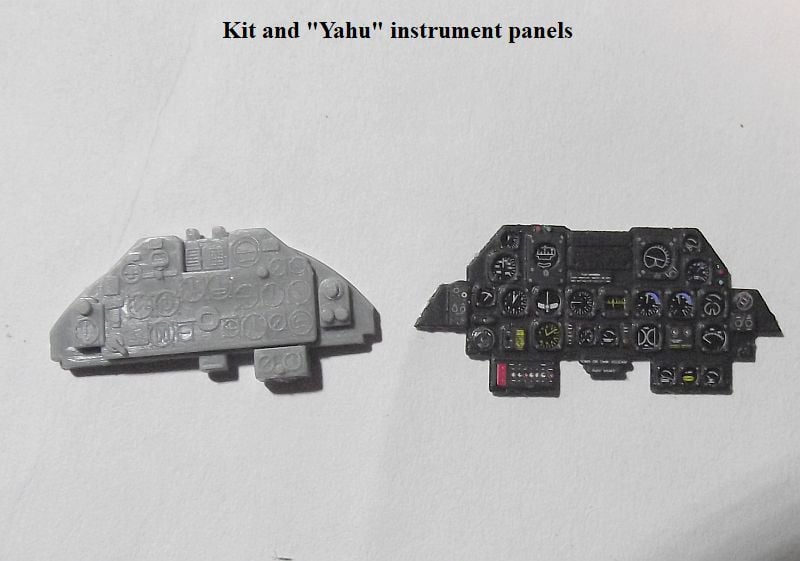 Thursday at 9:31 AM
Airframes