Maybe a too wide topic to be covered in one thread, but hopefully we could give a comprehensive set of data about big radials used in ww2 time frame. Under 'big radials', I mean Hercules, BMW-801, R-2600, R-2800, Kasei, Homare etc.
Some of data I'd like to post is already posted elsewhere on the forum, so this will hopefully be a master thread about such engines. Plan is to add any new stuff found. I'd appreciate people's feedback, corrections and additions, with as little flag waving as possible

To start out with Bristol Hercules. The two graphs are for an early version (Mk. IV), outfitted with a single-speed supercharger, fuel 87 oct here. The Mk.III was with 2-speed supercharger = better at greater altitude*.

*edited; only the Mk.III was with 2-speed S/C of the 'early' models 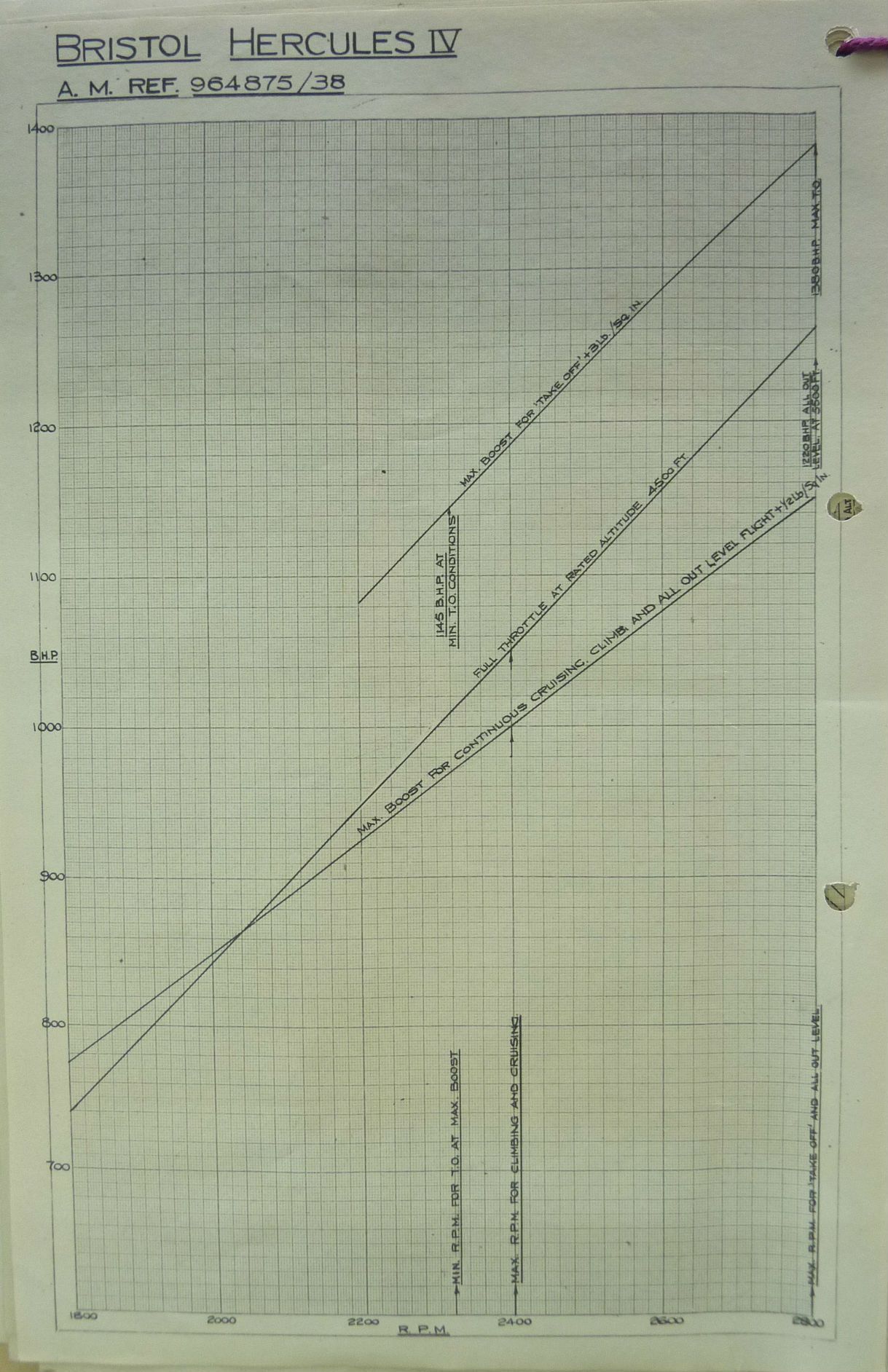 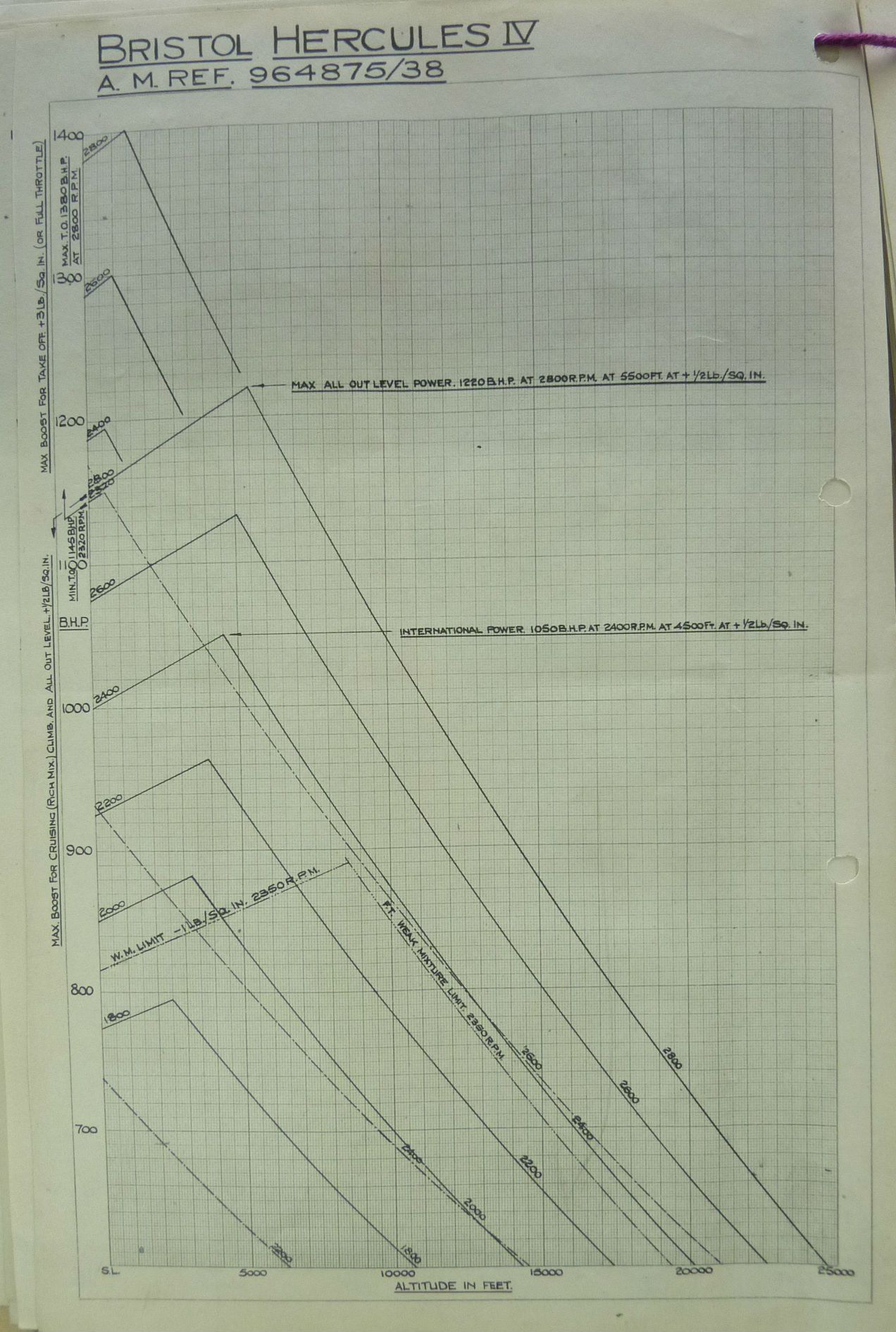 Some tables taken from documents that were kindly provided by Neil Stirling. Unfortunately, the detailed war-time tables that state RPM, boost, HP at altitudes and dates, all in the same time, are hard to come by. 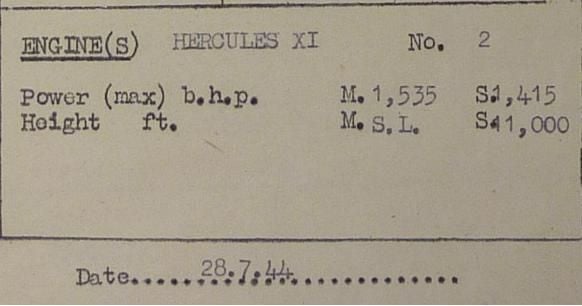 With introduction of the Hercules VI, the thighs really get going, power-wise.
Please note that going from 2800 to 2900 rpm yields nice power increase; there is some reading Williams' site about that (here). The Hercules VIII was a version with auxiliary supercharger added, the result being a notable increase in power at high altitude. Unfortunately, only a handful of those was produced. The Mk. XVMT was with turbo, again not used in service aircraft.
With Hercules 100, substantial changes were incorporated, and power was increased as a result. 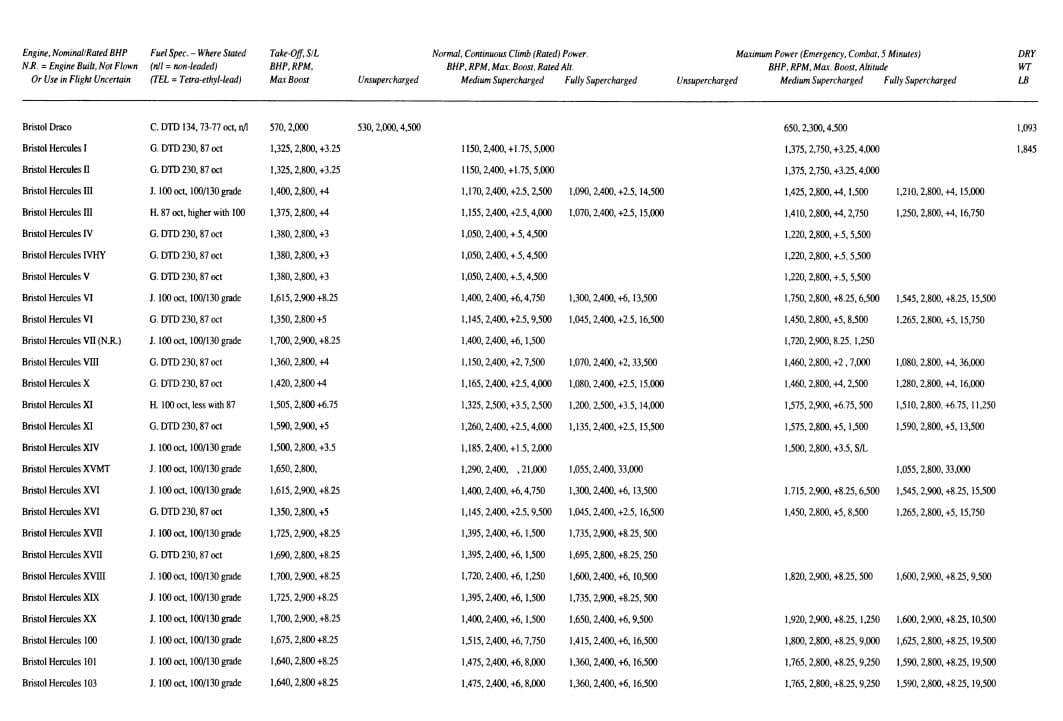 People might want to open, or download the pic above, in order to have it in high resolution.

The 1st US entry in big radials category should be the Wright R-2600. 1st used on the Boeing 314, the famed Clipper, where it was initially good for 1500 HP. It was quickly up-rated to 1600 HP, for the 314A. Military versions powered the A-20 (mostly 1600 HP for take off), and, among others, B-25, TBF, V. Vengeance, Martin Baltimore, SB2C (1700 HP for take off; the TBF/TBM and SB2C later received the 1900 HP version). Due to some meddling by the CW management, who tried to make more money at account to the engine's reliability, some R-2600s were malfunctioning, and the CW company was investigated by Trumman committee because of this. Despite this wrongdoing, the R-2600 gave good service across the globe. (please open the pic separately for hi-res) 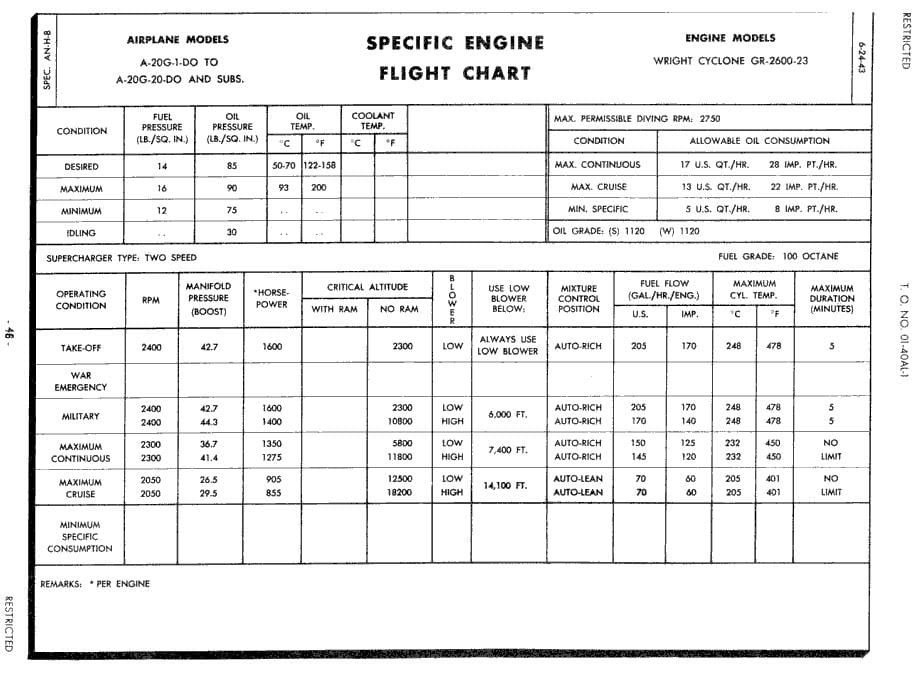 added: the Flight (?) wartime article states that BMW-801A have had impeller of 'slightly more than 13 in diameter' 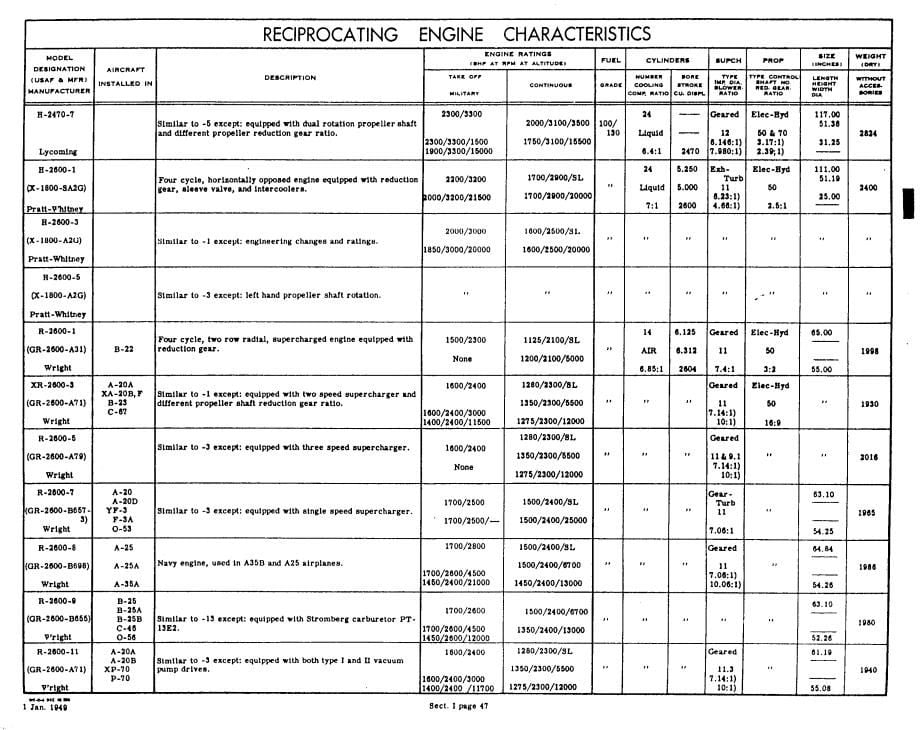 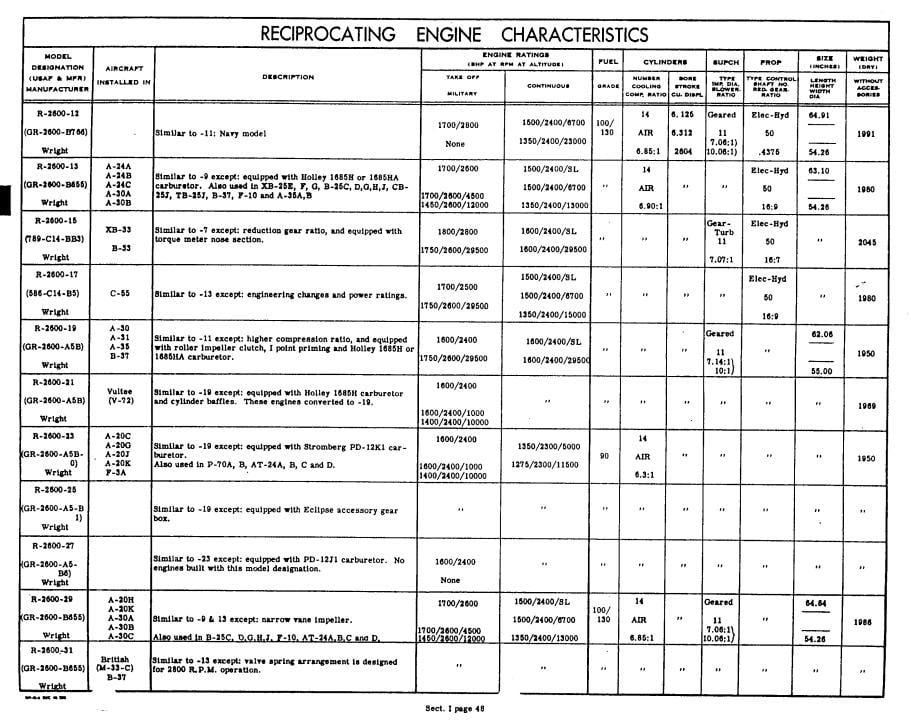 The power chart for the R-2600-8, used in Grumman TBF Avenger. The main USAF 'user' of similarly capable engine was the B-25. 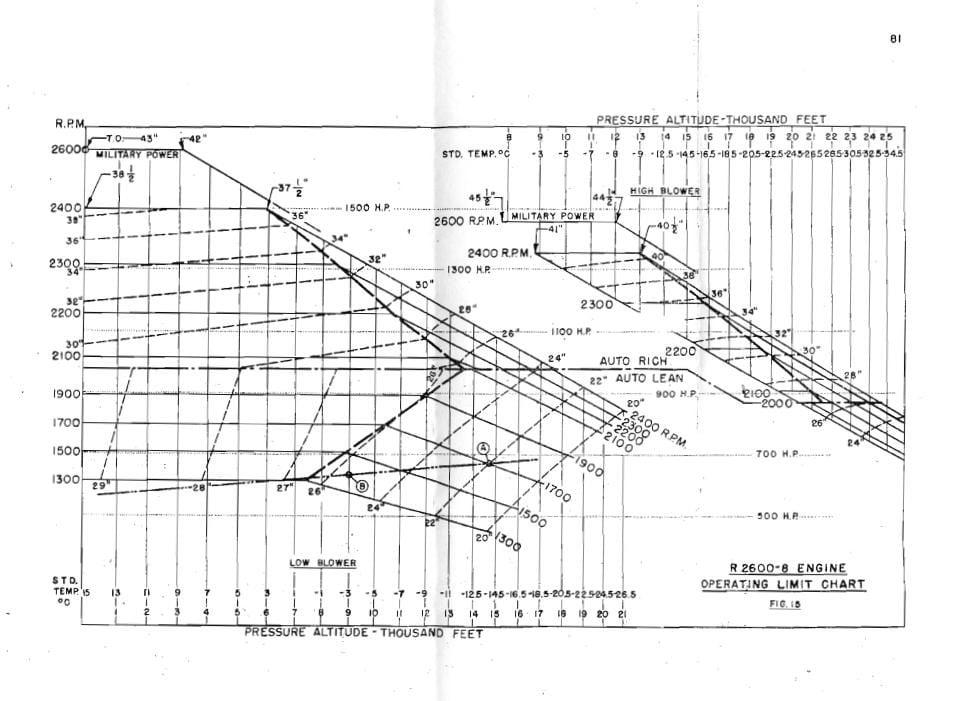 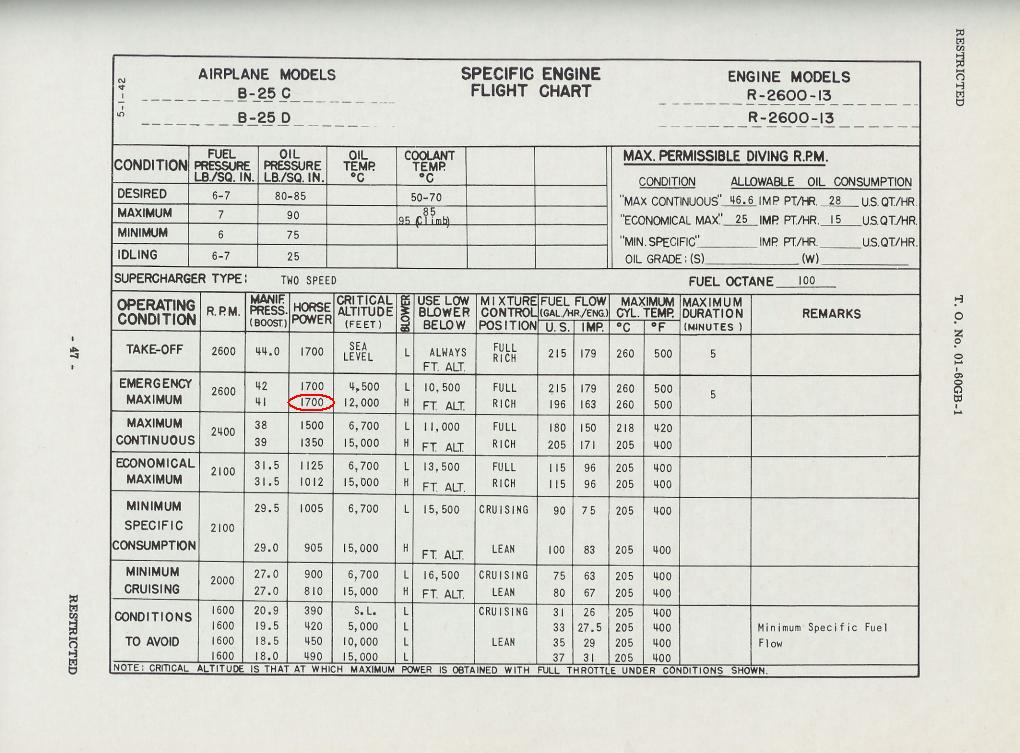 Further modified, strengthened and improved R-2600, used on later wartime versions of the TBF/TBM and SC2C, was the -20 version. USAF did not used it on their aircraft, at least by my knowledge. Corrections welcomed
The military power duration was 30 minutes now; max RPM for take off was 2800 rpm. Engine was introduced in second half of 1944. Please note that tables state significantly lower altitude ratings than the chart. 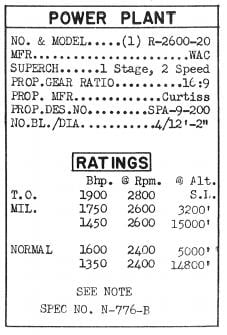 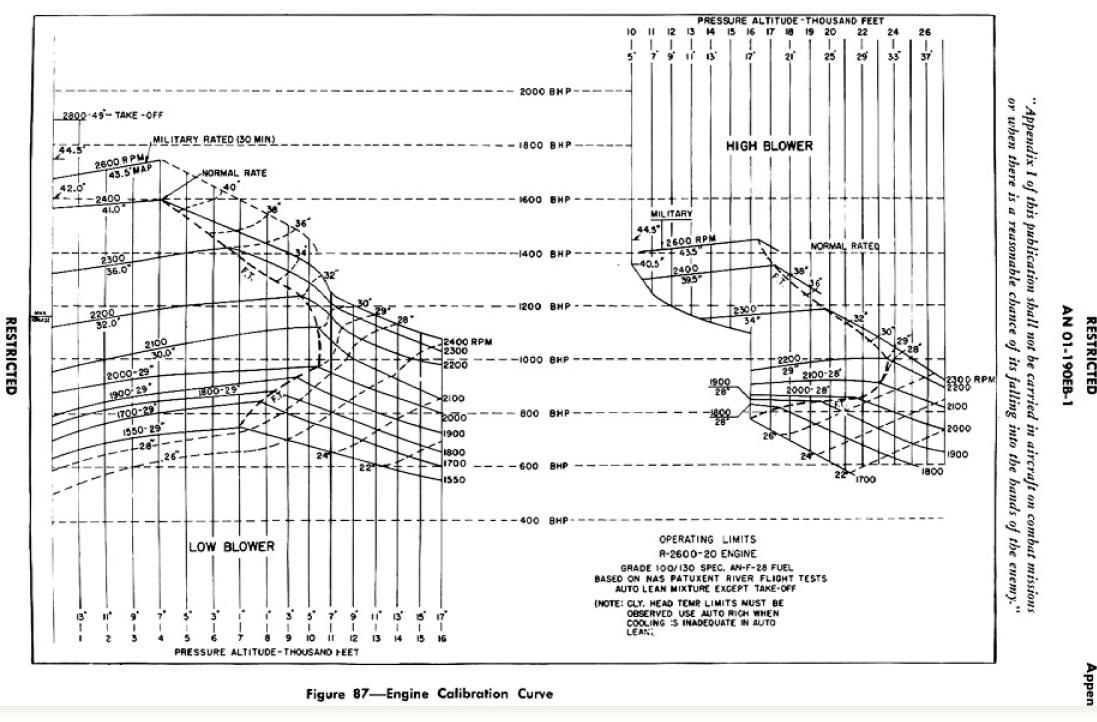 The era of big 14 cylinder radials was likely started by a French engine, the Gnome et Rhone 14K Mistral Major. Starting in early 1930s, the engine was making some 700-850 HP and, just before the ww2, almost 1100 HP. It was widely licence produced around the world, eg. in Italy, Romania, Soviet Union. Some of those countries made their alterations and improvements to the engine, that I will hopefully cover in this thread too. Wikipedia article in French.

The G&R 14Kbrs version (same drill as above): 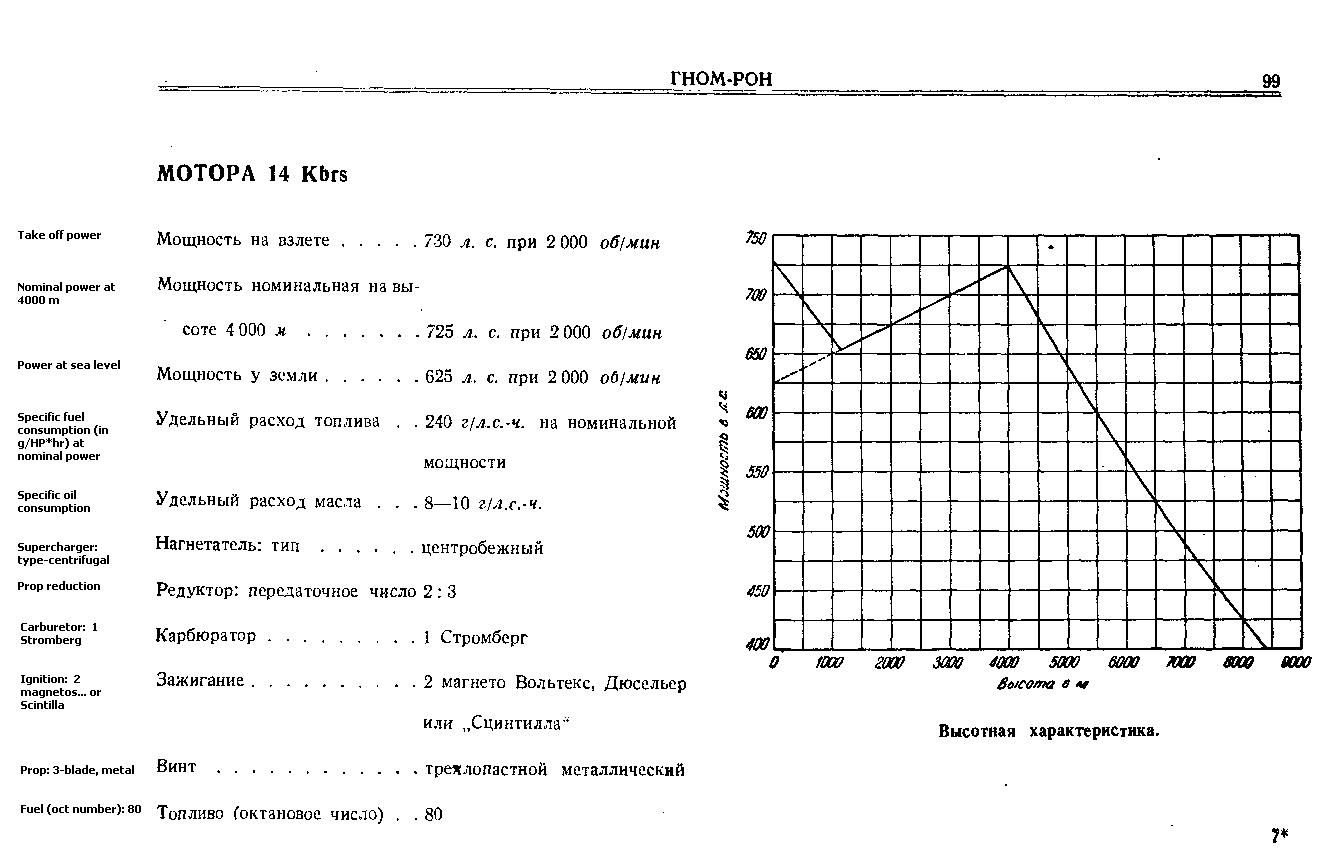 The 14K turned into the 14N which turned into (too late) the 14R with a center bearing. ALL used the same bore and stroke as did, strangely enough, the Bristol Hercules and the Bristol Mercury and the Pegasus. The Piaggio company of Italy built not only a 14 cylinder version but also 7 9 cylinder single row versions using the same cylinder dimensions.

The 146mm bore and 165mm stroke may be able to be traced back to the Bristol Titan (5 cylinders) of the 1920s which Gnome-Rhone had licensed. Gnome-Rhone began changing things on the engines to get out of paying royalties.

Engine companies loved radial engines in the 1920s/early 30s because they could offer a variety of engine sizes/powers using the same cylinder assembly, just different numbers of them. Worked pretty good as long as both the BMEP and rpm stayed on the low side.

Yep, the G&R was producing the Titan under license.
The company newsletter/magazine from early 1930s into the war, along with Hispano-Suiza, SAGEM and SNECMA stuff, can be downloaded from here:

The next iteration of the 14K might be the 14Kdrs, that was supposed to be 1000+ HP engine. The French Wikpedia states that 14K was hard pressed to deliver more than 800-900 HP until the late 1930's. Main users of the engine were French bombers, like Amiot types or Farman 222.
Please note that dashed lines are for values with ram; the table that goes with the chart is a bit misleading on power values, when compared with chart. 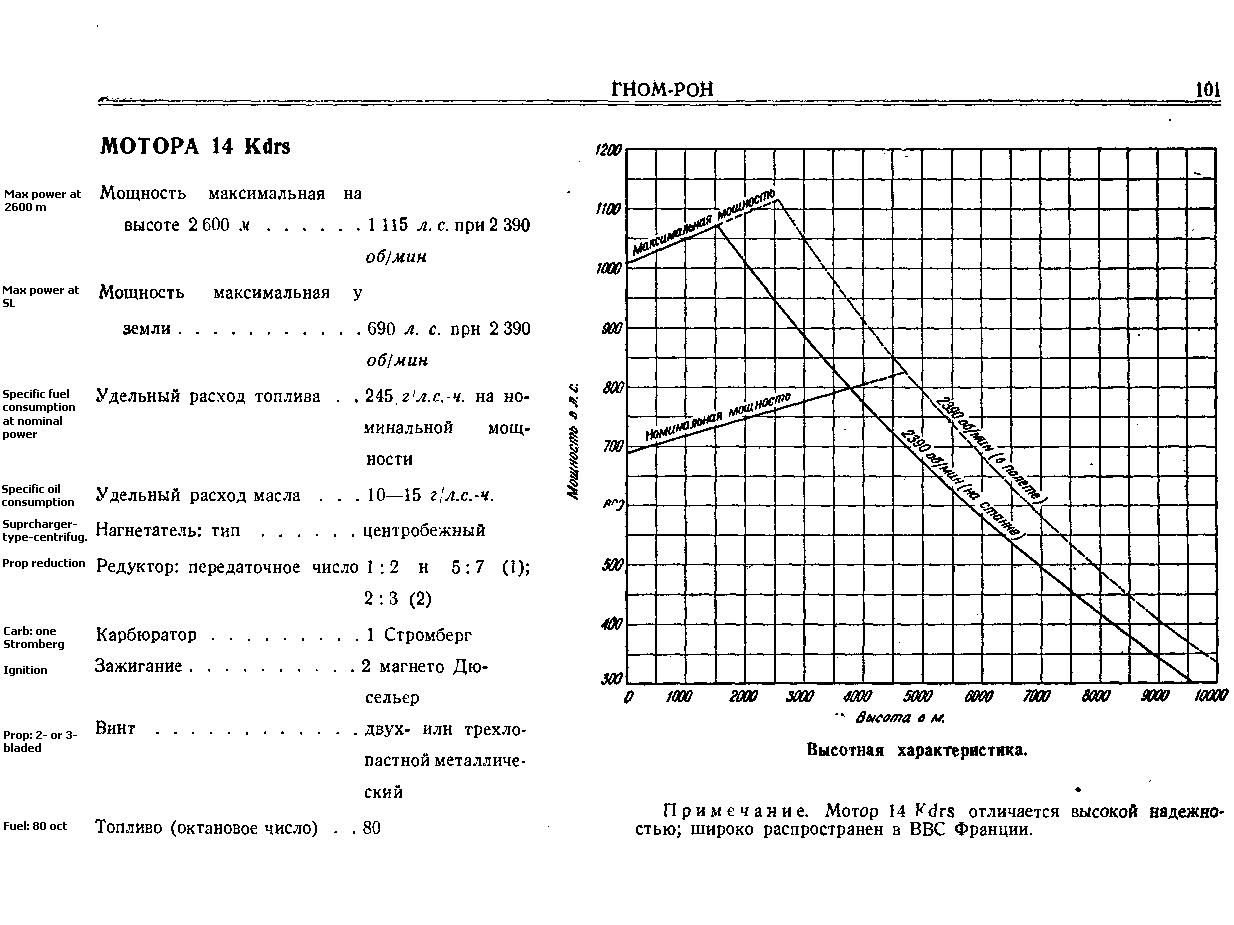 They traded performance at altitude for performance low down. The 14Kfs engine doesn't use a reduction gear and is 37kg lighter than the other two. (536kg vs 573kg) 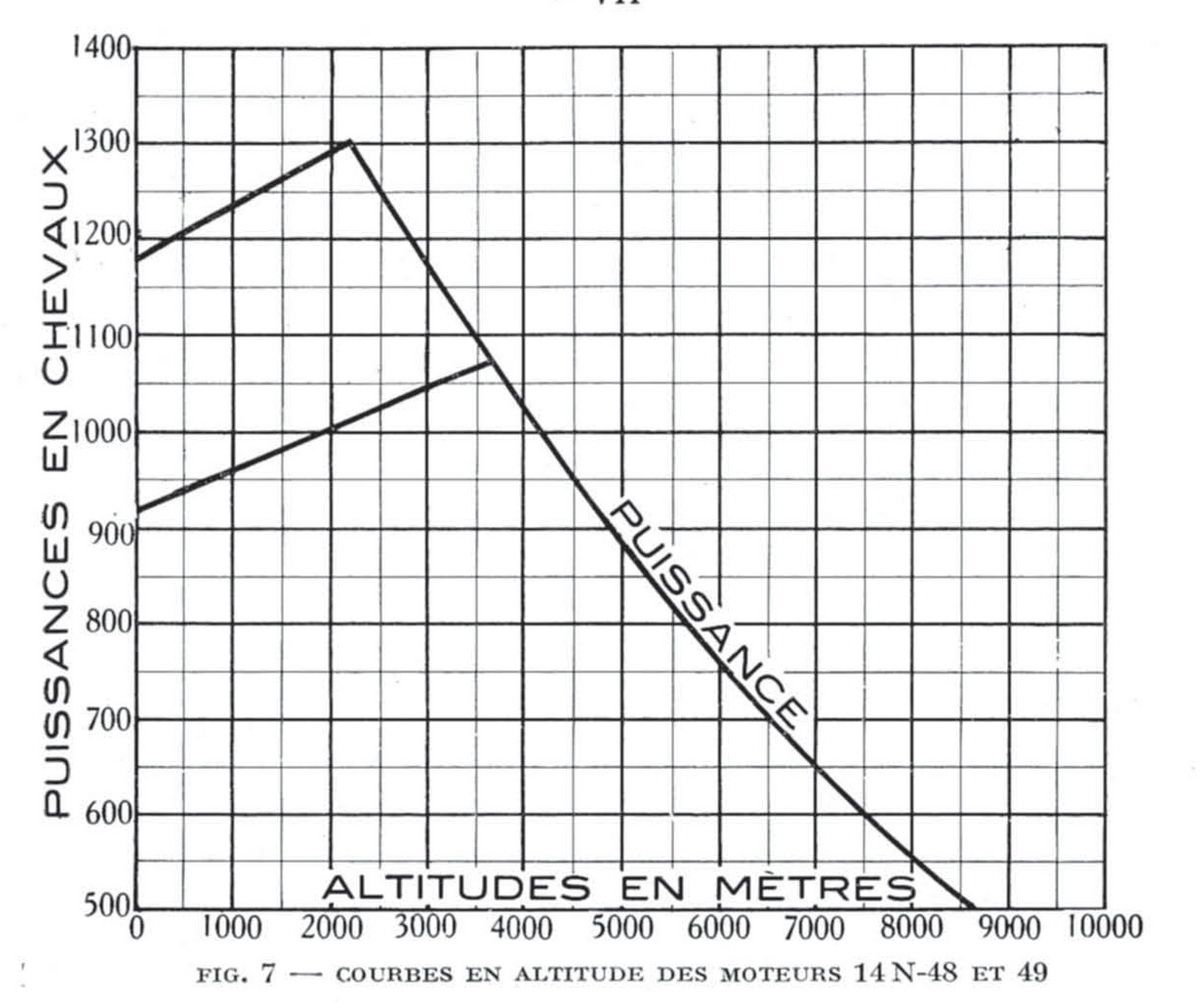 The upper part of the curve is with manifold pressure limiter turned off.

Before 1936 the French designation of aero engines was made from letters with "r" = réducteur = reduction gear and "s" = suralimenté = supercharged. The third letter, sometimes first, sometimes last, is for version. Sometimes minor alterations were noted with "1" or "2".

So 14Kirs = 14K, "i" version, with reduction gear and supercharger
and 14Kirs1 = same with minor modification (supercharger gear ratio 6,4 instead of 8,5, more power at lower altitude...).

If you want to know more about these engines, I AM the French Wikipédia notice writer...

Thanks for contribution, people. Sure enough, please continue with whatever historical data there is about the topic.
C

I have a very old article by Gérard Hartmann which stated that “Quand l’essence à 130 degrés d’octane est reçue par la Grande-Bretagne et la France en septembre 1939, des moteurs sont testés avec ce nouveau carburant. L’effet est magique sur le 14 N : la puissance s’élève aussitôt à plus de 1 300 ch au banc (niveau de la mer).” Thus I assume the upper part of the curve can be used with some sort of 100 octane fuel. The problem is that, as pointed out by Shortround6, there wasn't a well defined 100/130 octane fuel available before June 1940. Do you know the type of fuel used for your power curve? SR6 also asked whether such high power came at a cost in reliability.


Bretoal2 said:
...
If you want to know more about these engines, I AM the French Wikipédia notice writer...
Click to expand...

Can you tell us the secrets of the mysterious 14R of the MB-157? Alas, my French doesn't distinguish well between two speed and two stage superchargers.
S

The 14R of the MB-157 was a development of the 14N with several changes, the most important being a longer crankshaft and crankcase that allowed room for a bearing between the two rows of cylinders. This allowed for higher RPM (2600rpm) vs the 2400rpm of the earlier engines. It may have allowed for higher boost pressures ( which cause higher pressure in the cylinders) 14Rs used 8.6-10.1lbs boost compared to the 4.3lbs used by the 14N . I don't know if even more finning was added to the engine but a 14R weighs about 400lbs more than a 14N. Post war 14Rs came with both single speed and two speed superchargers. I would note that the Post war engines, rated for 100/130 fuel, were given lower power ratings than the pre-war 14R was (or at least lower altitudes). Traded power for longer overhaul life or predicted figures didn't pan out?
The 14R didn't have a two stage supercharger although the SZYDLOWSKI - PLANIOL supercharger, if used, has what might be described as a partial stage. There are moving inlet vanes that act like swirl throttle and 3 disks of airfoil shaped blades in front of the main impeller that help guide/compress the air before it hits the main impeller, however as there NO stationary blades between the disks like in a normal centrifugal compressor the actual compression may be slight. The supercharger may be a bit more more efficient than a "normal" supercharger and heat the intake air a bit less the large improvement talked about before the war doesn't seem to have happened. 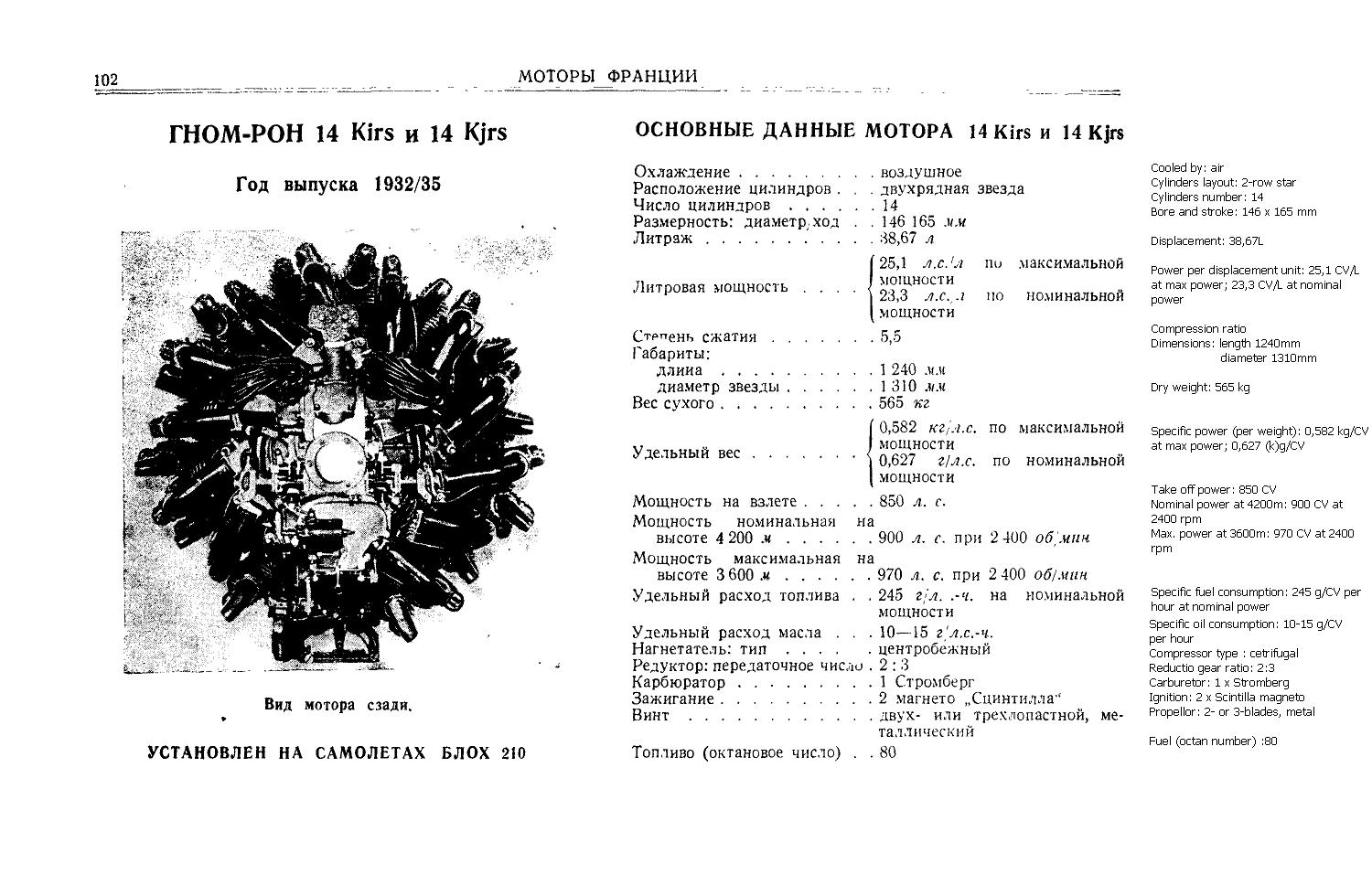 Thanks.
The data to what appears to be the G R 14N0. The Soviet's state the S/C drive as being of 2-speed?? 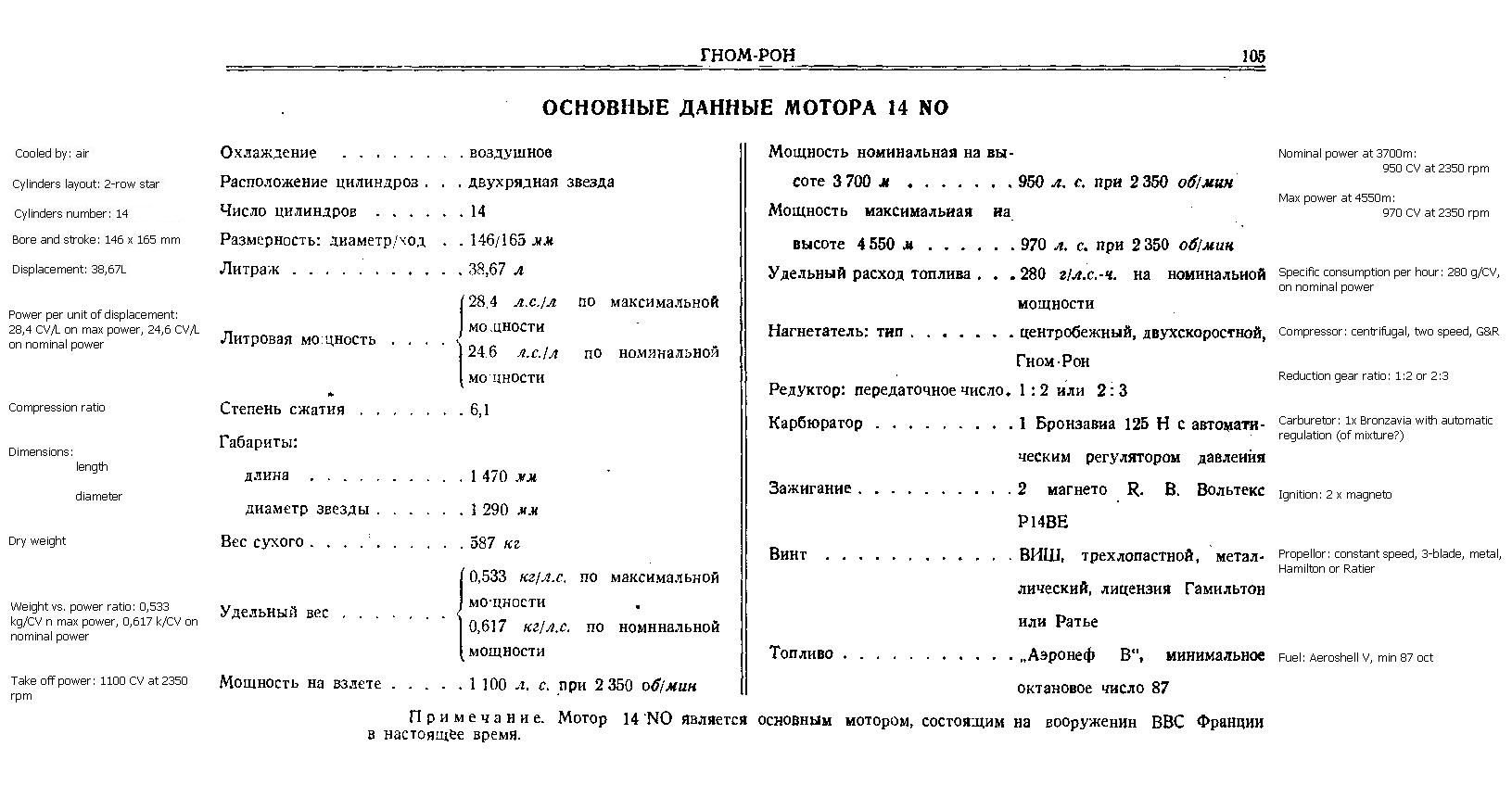 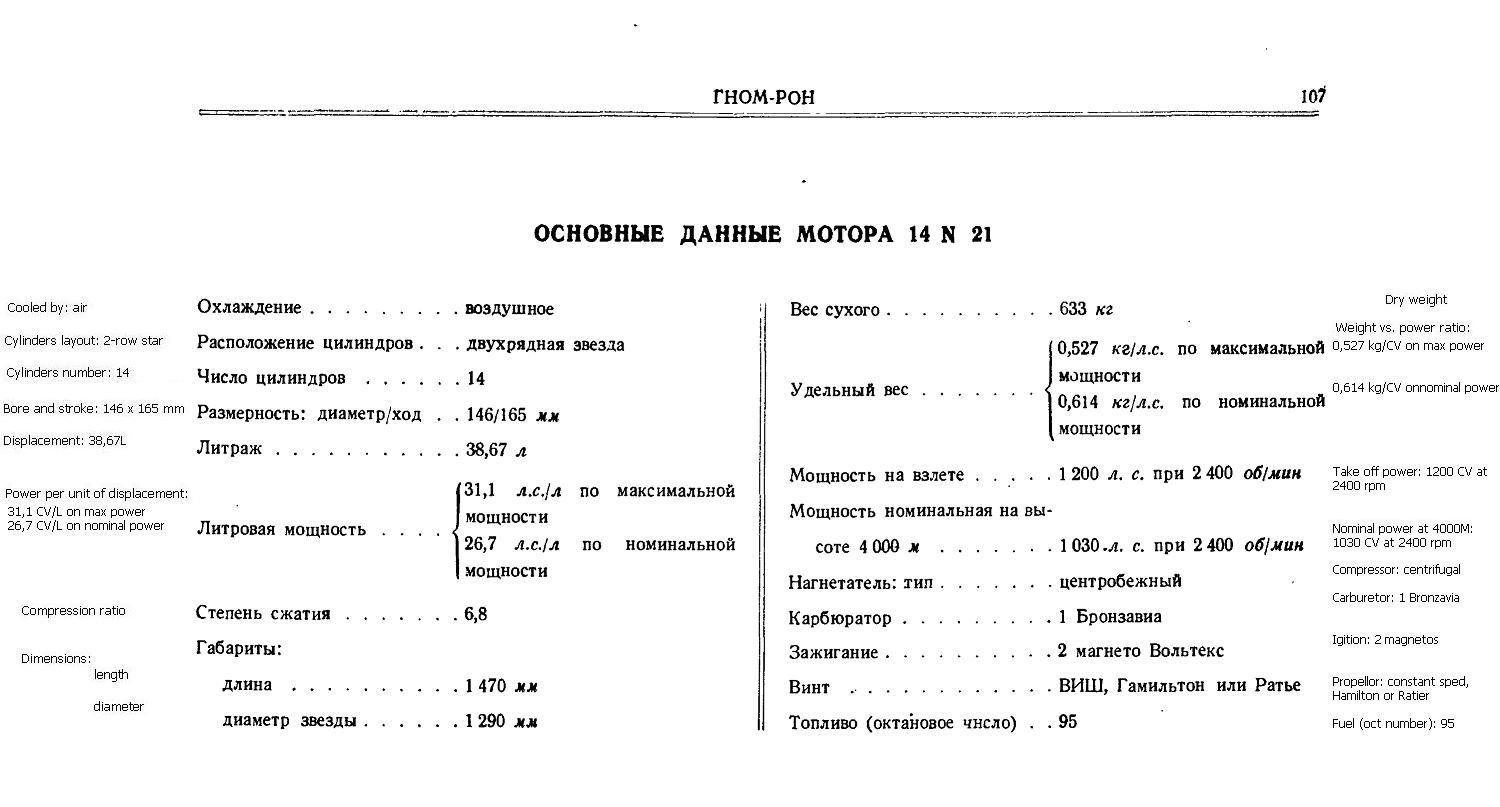 Jul 9, 2022
cherry blossom
C
C
Of the AMERICAN aircraft manufacturers, which one "got" jet propulsion the earliest? By that I mean, went "all-in" (or close to it) on jet designs.