What's in a name?

I started a new thread, as this might turn into too much of a thread drift. In the ongoing thread about single engined fighters with 9 cylinders Shortround wrote:

The Hawk 75, Hawk 81, Hawk 87 may very well hold the record for most different engines flown in on basic airframe. If any plane beats it I would be happy to hear about it.
Click to expand...

I don't know, maybe the Spitfire? My reasoning is this:

On the face of it, of course it only had two different engines, the Merlin and the Griffon, at least to my knowledge. But comparing the Merlin of 1938 with the Merlin of 1945 makes me wonder to what extent that is the same engine. On the one hand they are both called Merlins, on the other the later engines have two stage superchargers, I'm not really savvy enough to deside if that is to be considered part of the engine or an add on. Then I always struggled with the American engines, mostly a couple of letters followed by apparantly almost equal numbers. Very confusing for one like me to discern how much different one Allison is from the other, when is it a gradual development, and when is it a new engine?

In airframes we have a similar situation, but I feel better equpped to discuss it. Take the Spitfire, just the difference from the Mk I to the Mk 21, not to mention later developments, is staggering. New engine, new profile, bubble canopy, new wing and double the weight. But undoubtedly they are all Spitfires.

Then take the Yak family, Yak 1, Yak 3, Yak 7, and Yak 9 to again stay in the war years. I could make a case that they basically was incarnations of the same basic fighter, on the other hand I'm tempted to divide them into 1, 3, and 7, 9 families. At which point do they 'really' become a new fighter?

To take the Japanese, the Zero changed quite a lot from A6M2 to A6M8, or at least to A6M7 if we only allow operational models. Not as much as the Spitfire and the yaks, but still. On the other side there's the Ki -and the Ki-100. It should not be controversial to claim that the latter was merely a Ki 61-II modified to accept a radial, but they are by nomenclature two different fighters.

On the other hand the tempest stayed the Tempest even when it got tubbier, the FW-190 only changed from A to D when it fitted an inline. Except the next derivative became the Ta-152, but was that 'really' so much more different from the D than the D was from the A. Same problem with the Laggs and La's really.

But as not everybody was so sensible as the Italians (never thought I'd say that), we are left with a question that I fear we cannot answear 100% consistently. Sometimes the gradual evolution ends with something new, it's just that we cannot always draw a firm line between one and the other.

So after this dose of postmodernism, i'm still wondering whether the Spitfire had more different engines than the Hawk 75, Hawk 81 and Hawk 87. At least the last two were still P-40's.

At a certain point we run into the serial production variation on the Ship of Theseus concept.

I thought those kind of nomenclature decisions were made in the bar after work.

So unlike many other types, the Hawk 75 alone, saw four different engines (from three different manufacturers) installed and used across the Model 75 spectrum.

This makes me want to gouge my eyes out with a dull tablespoon.
P

Some of this depends on how you count the engine 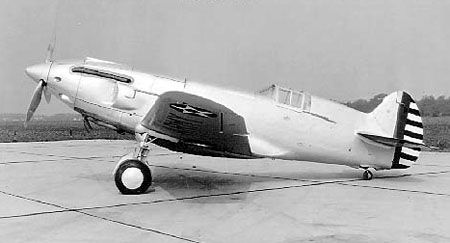 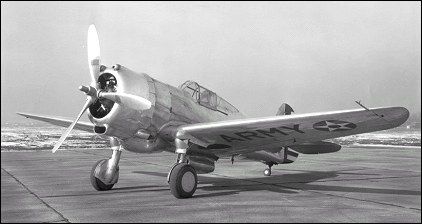 I favor the two stage mechanical and this was before Grumman flew an F4F with a two stage.

If people want to count the different superchargers on Merlin's and Griffons?

I'm not counting series within an engine line, I am counting individual engine types.

GrauGeist said:
I'm not counting series within an engine line, I am counting individual engine types.

And they never installed a Merlin into a Model 75, the Merlin was fitted to a modified Model 87A (P-40D) which had been designated a P-40F (Model 87B).
Click to expand...

What started this was my comment in another thread

"The Hawk 75, Hawk 81, Hawk 87 may very well hold the record for most different engines flown in on (e) basic airframe." edited to add the E.

Just Schmidt said:
Then take the Yak family, Yak 1, Yak 3, Yak 7, and Yak 9 to again stay in the war years. I could make a case that they basically was incarnations of the same basic fighter, on the other hand I'm tempted to divide them into 1, 3, and 7, 9 families. At which point do they 'really' become a new fighter?
Click to expand...

This almost the reverse
How many airframes (names?) using the same basic engine? OK some M-106s or M-107s showed up
The Yak-3 used a smaller wing (not clipped, unless center section cut?)

Just Schmidt said:
To take the Japanese, the Zero changed quite a lot from A6M2 to A6M8, or at least to A6M7 if we only allow operational models.
Click to expand...

Just Schmidt said:
On the other side there's the Ki -and the Ki-100.
Click to expand...

We can also throw this into the mix. 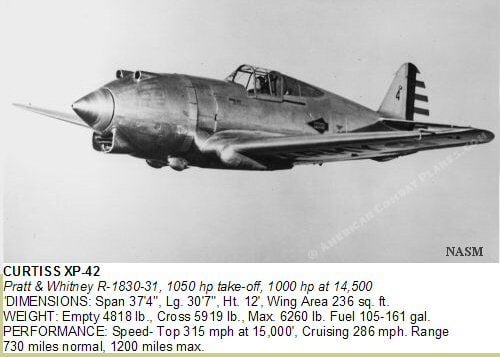 The 4th P-36A on the production line.

The initial configuration of the XP-42 suffered from serious overheating problems and from vibrations of the propeller shaft. Attempts to cure these problems resulted in no less than twelve different cowling designs being tested on the XP-42. Various types of cowl flaps were fitted, and short-nose high- and low- inlet velocity cowlings were tried with and without fans. The nose was progressively shortened until the airplane gradually once again resembled a P-36A."

So far no details of the weight or extra length of the engine show up in most sources. Engine was also used in
one version of the XP-41 and possibly the Vultee P-48 (company designation) 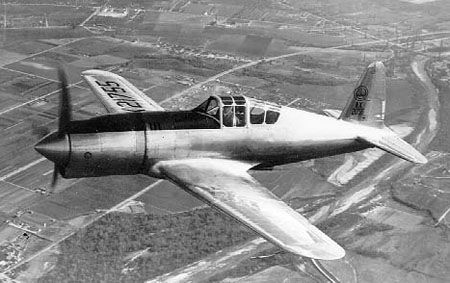 The long noses went away, I don't know if they got new engines or the engines were rebuilt with new nose cases and shorter prop-shafts.
I think only the Curtiss XP-42 got cooling fans and I don't know how they powered the fan. The XP-42 may have had several different length prop shafts as from looking at photos, there seem to be at least one intermediate length between longest nose and regular length.
You must log in or register to reply here.

B
Given criteria (see post), what's the best radiator arrangement for a single seat/single engine fighter?

Aerobatics in a Ford Trimotor

Mosquito Doing a Deck Landing in 1944!

Wildcats in action in Europe 1945