This is sort of a follow on from a discussion asking if the Mosquito and similar aircraft were made out of metal as far as if there was any weight advantages or disadvantages. Of course, it also sort of became a discussion about maintenance and such.

But my "what if" concerns performance. Namely, would the Mosquito and/or Hornet gain speed or range if they were all-metal? For example, take the Lavochkin La-9, which was a redesign of the earlier La-5 and La-, to be all metal instead of wood or mixed wood and aluminum construction. All aircraft were powered by the same M-82 FN radial engine of 1850bhp. Compared to the La-7, the La-9 ended up being nearly 20mph faster (part of that is down to weight savings vs all wood, part of that is a laminar flow wing), and the big thing that was improved is that the all aluminum construction allowed for range on internal fuel to be increased by more than a factor of two.

I'm wondering if an all metal Mosquito or Hornet would gain from any weight savings, and if their speed or range could get boosted by going the all metal route?

Not to mention that DH actually weren't strangers to all metal construction. The Flamingo was all metal, as well as the Dove and Comet airliners, and the Vampire and Venom line of jet fighters were intended to be all metal until the RAF asked DH to use a wooden front fuselage.
P

I honestly think this is a misunderstanding due to punctuation and or grammar. It is often said that the Mosquito was a lightweight design made out of wood. It would have been better to say "the mosquito was a lightweight design AND it was made out of wood". Lightweight bomber design at the time meant no defensive armament and just a two man crew. Those two things which the RAF were concerned about had a much bigger influence on the Mosquito's size and weight than the choice of material did.
E

The DH Flamingo was the first all aluminium, stressed skin construction aircraft designed and built by Dr Havilland. It first flew in Dec 1938. Design of the Dove began in 1943 and it first flew in Sept 1945, and the Comet design began in 1946.

The Hornet however represents a kind of half way house between DH wooden designs that culminated in the Comet Racer, Albatross airliner and Mosquito and the stressed skin designs noted above. The Hornet was part wood part aluminium construction with plywood replaced in certain areas by aluminium. From "The Hornet File"

For its time it seems a pretty efficient load lifter. Aluminium was clearly being used in areas of high stress to help minimise weight.

BarnOwlLover said:
I'm wondering if an all metal Mosquito or Hornet would gain from any weight savings, and if their speed or range could get boosted by going the all metal route?
Click to expand...

IMO - keep them as they were. Both of them were very light, very streamlined, carried convincing firepower and a lot of fuel, and were powered by excellent engines.
S

What is often overlooked is the smooth finish on the Mosquito (and I presume the Hornet.) with the doped fabric covering.

A lot of metal airplanes either came from the factory or soon acquired in service a dished/wavy surface texture.

The other thing overlooked is that you need to design an entirely new structure that just matches the external dimensions of the Mosquito/Hornet.

It took the Japanese almost 2 years to get a wooden version of the Ki-84 into the air. Adjust as you see fit but it is going to take a lot of time
B

Going from one material to another it seems will take quite a detail redesign, so I guess pick one and hope it pays off (the Lavochkin La-7 and La-9/11 are related but distinct designs due to going from mostly wood to all-aluminum).

That being said, I've seen pics of American aircraft and late war/post war British all metal aircraft that have very fine surface finishes. Granted, these were mostly test aircraft and probably a bit more time and care were taken to pay attention to such details. But then again, there's at least one or two threads on this forum where one of the big things that got improved on the Spitfire during the war was fit and finish and it lead to fairly significant aero improvements.

Except for some small detail parts and small sub-assemblies, airplanes are built in a jig, a big chunk of steel that will provide "details" where rivet holes are drilled and eventually riveted. In some cases a machine called a "drivematic" may do this process automatically but I believe these came about after the war. The people drilling holes and bucking rivets have certain guidelines to follow, especially when using flush rivets, ultimately verified by inspectors. Unless you have an aircraft being hand built, structural assemblers are doing their jobs in repetition and have no idea where their final product is going to wind up. In other words, you get what the jig and the assemblers give you. Now some aircraft were taken off the production line, had some of the minor "divots" and gaps (that were acceptable to production line aircraft) filled with body putty and given a smooth paint job for flight test or record breaking purposes.

Trying to make a production "surface finish" judgement based on WW2 photos, aircraft that were placed on a stick or placed in a museum in their post war state with no restoration is just plain silly! 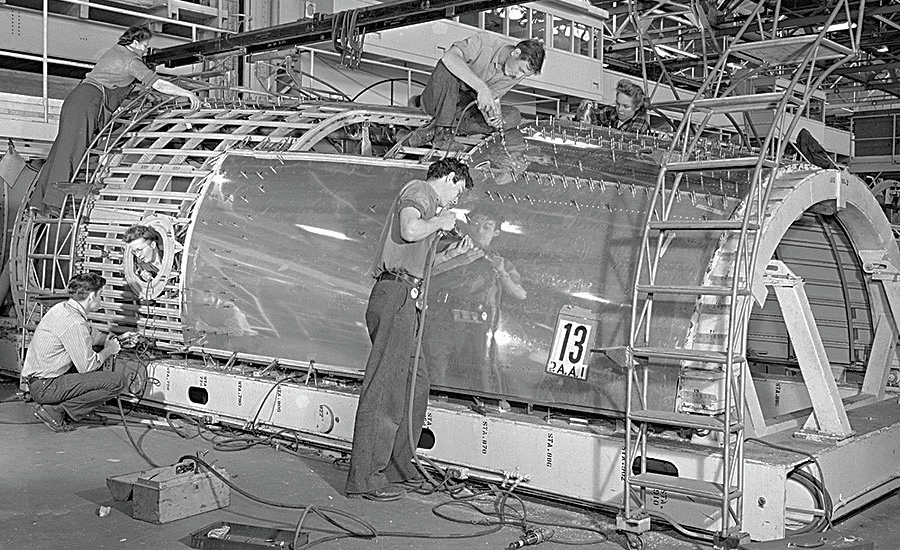 BarnOwlLover said:
This is sort of a follow on from a discussion asking if the Mosquito and similar aircraft were made out of metal as far as if there was any weight advantages or disadvantages. Of course, it also sort of became a discussion about maintenance and such.
Click to expand...

Have we not been through this already? There's a few threads that deal with this subject on the forum already and we'll just be recycling what's already posted.

This isn't really meant to be a debate as to whether the Mosquito would be better off made of metal (it wouldn't, it'd tie up metal resources) more of a question as to how much a plane with the basic shape of the Mosquito would weigh if it was made of Aluminum alloy instead of wood for the...
ww2aircraft.net

Metal Mosquito built massively in the US

Metal Mosquito built massively in the US The attache of the USAAF to Britain recommended the Mosquito as 'exceptional' and a plane was taken to the US for evaluation once the US came into the war. The feedback from manufacturers was poor, citing the wooden construction as an act of...
ww2aircraft.net

It is clear to most that the Mosquito gave an unrivalled precision access to Axis industry in daylight and many have advocated both an earlier decision to produce Mosquitos and increased production. However, the British aero industry was tied to metal production. Can we see some metal...
ww2aircraft.net


pbehn said:
Those two things which the RAF were concerned about had a much bigger influence on the Mosquito's size and weight than the choice of material did.
Click to expand...

Yup. It's worth remembering the Mosquito was intended on being built of wood because of de Havilland's workforce's experience with wooden structures and to counter an anticipated (but never happened) shortage of aluminium. The Hornet benefitted because of the low drag properties and advances in bonding techniques, while still utilising that workforce structure and experience that had created from building the Mosquito. Even the Vampire and Venom jets had wooden fuselages, although their wings, tail booms and empennages were all metal.
B

However, Bishop and DH wanted the Vampire to be all metal until the Air Ministry suggested making the front fuselage out of wood. It was also supposed to be initially armed with 6x20mm cannons (4 in lower fuselage, one in each tail boom leading section) instead of "just" 4, though that was back in 1941 when the program began.
B

And, thinking about it, since there's so many Vampires and Venoms preserved and airworthy, I wonder if the amount of metal in their airframes helped with this, or just that they're relatively small aircraft, as well as among the most "accessible" jet aircraft out there?
You must log in or register to reply here.

B
Hawker Typhoon and Tempest with RR Griffon
2

How would the Fw190 have performed with the BMW 8028 engine with two-stage supercharger?
2

A small what-if: Ju 52 with two engines and a retractable U/C instead of the 3-engined layout?
2 3 4