Flying Car to Be Available In 2025

From the Robb Report:

"Alef's electric Model A, priced at around $300,000, will be the only road-certified flying car that can do vertical takeoff and landings like electric-powered eVTOLs, including the Joby S4, Lilium Jet and Vertical Aerospace VX4. Santa Clara, California-based Alef recently introduced its two-passenger Model A, saying it would be on "pre-sale" for a deposit of $1,500 in the first quarter of next year. The company says the first deliveries will happen in the fourth quarter of 2025."

"Besides its retro-futuristic look (thanks to Hirash Razaghi who has designed Jaguars and Bugattis) the Model A is different from other flying cars entering the market because of its ability to takeoff and land vertically, and then drive away. A company video (at top) shows the Model A coming up to a traffic obstruction, going into lift mode, hurdling the obstacle, landing back on the highway and driving off, while the other cars are stuck in gridlock. Whether that'll be legal or not remains to be seen. But that kind of air-pivot has certainly been every driver's fantasy on a busy commute. "

Alef CEO Jim Dukhovny told Robb Report that the Model A was designed for short commutes. "Most commuters typically travel under 30 miles on average," he says. "We designed it to be the fastest and most convenient transport ever created for both rural and urban settings." The fact that the wings are integrated into the carbon-fiber body rather than being retractable, says Dukhovny, means the owner won't have to take off and land at airports. "That can eliminate 50 percent of the travel time," he says.


While ground-mode resembles a stylized automotive body, the design of the carbon-fiber chassis is its innovation. The two seats, or cockpit, is gimbaled so it tilts 90 degrees forward as the Model A moves into aircraft mode. From the ground, it looks like the aircraft is flying on its side, with the wheels pointed backwards. But the body is actually perforated carbon fiber so the air flows through it, and the wing structure inside is similar to a two-wing biplane. "The biplane is considered a very stable aircraft design," says Dukhovny. 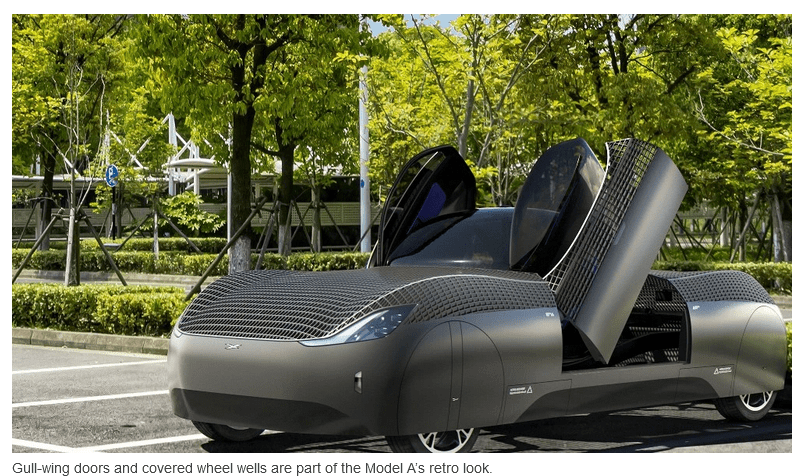 People don't know how to drive in 2 dimensions so three should be fine.....

What could possibly go wrong?
M

Crimea_River said:
People don't know how to drive in 2 dimensions so three should be fine.....
Click to expand...

The thing that gets me is that it looks pretty normal on the ground but in the air rotates 90 degrees so that "top" becomes "forward" and the cockpit also rotates accordingly.

I'm not sure aboit FAA regulations, but when that thing is on the road (at least in the U.S.), it has to conform to Federal Crash Safety regulations - not sure how they'll get around that.
S

what can go wrong!

The first thing to occur to me, is what happens if I fly it from my house to the airport to then get in my real airplane? Could I do that legally? How close can I get to an airport and still be legal? And what about ADSB? The hardware for that costs over $3K.

"Popular Mechanics" has been predicting flying cars since the Thirties. Ho hum...

I also noticed the caption on the photo states that it has "gull-wing" doors.

Those are not gull-wing doors, they are "scissor" doors.

I give it 5 mins before an ambulance is needed…
T

My dad bought 1 share in the Flying Car Company back in 1965.
You must log in or register to reply here.

M
How Would You Like To Be In This Situation?

China's Navy seems to be getting a bit bold