I have been reading the book "One-Armed Mac" about Sdrn Ldr James MacLachlan, who flew Battles in France, Hurricanes in Malta, and Mustang MkIA in the ETO. It mentions that he was flying a Mustang MKIA that had a "black and dark green" paint scheme. It brought to mind the paint scheme of this Hurricane used for night intruder missions, but I wonder if they replaced the sea gray with
black on the Mustang in addition to painting the bottom black? 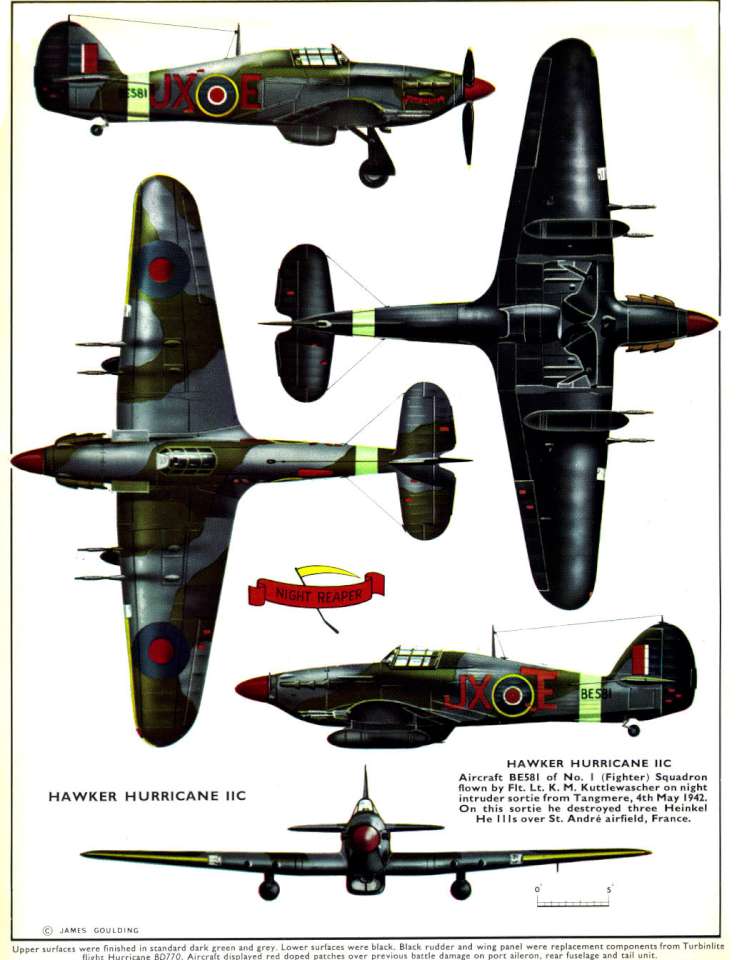 The standard camouflage on the RAF Mustang Mk.IA at the time was in the normal RAF Day Fighter Scheme colours of Ocean Gray and RAF Dark Green upper surfaces in a standardised disruptive pattern, with Medium Sea Gray under surfaces. Added to that was a Sky propellor spinner and rear fuselage id band, yellow wing leading edge id stripes and normal national markings - what would be referred to as the C and C1 type roundels and fin flash with reduced white areas on fuselage sides and underwings, type B on top of wing. At the time the ACC Tac/R Mustang Squadrons did not display Squadron id codes on their aircraft, just the individual aircraft id letter painted in Sky - normally for the Mustang Mk.IA this was painted forward of the fuselage roundel.

MacLachlan had initially his Mustang Mk.IA FD442, and then later the second Mustang, a Mk.I AM107, which was flown by the then F/L Page, put into a special camouflage and markings scheme for their sorties with the AFDU.

MacLachlan before he conducted his Mustang sorties with AFDU, went and spent a good deal of time talking with senior Mustang pilots of the RAF Tac/R Squadrons about their low level sorties over northern France, Belgium and the Netherlands. He talked tactics, targets, defences, German response times, low level navigation and about the Mustang's strengths and weaknesses up against the various German fighters likely to be encountered. He did his homework. Included in those discussions, camouflage and the effectiveness of the RAF day fighter scheme at low level over Northern France was discussed. The Tac/R pilots made the point that anything 'light' on the aircraft made it more noticeable at low level. So the sky spinner, rear fuselage id band and aircraft id letter were all seen as things that would make the aircraft stand out more. (see how that carried forward to the 2TAF scheme of early 1945 where the spinners were painted night and the rear id band was over painted). Included in the discussions were the times of day and weather conditions the Tac/R Mustang pilots had found best for their 'Ranger" and "Rhubarb" operations over occupied western Europe. Early morning and late afternoon were considered prime times as well as days with low overcast sitting at around 1,500 to 2,000 ft above ground level to reduce reflection and provide a cloud base that could be reached rapidly for evasion if required. Also made it harder for an enemy fighter to 'bounce' them coming down through a cloud base that low.

That was where the ideas about repainting the Mustang he would use with over painted spinner, id band, no code letters and a colour more likely to blend into the countryside over Northern France, probably came into being. Also senior Tac/R Mustang pilots were also being cycled through AFDU from the various Squadrons for courses on air fighting tactics, so MacLachlan had plenty of opportunity to talk to them as they came through on courses. I've had a couple of Tac/R pilots recall their discussions with MacLachlan, hearing of his preparations, initial successes and then loss. Again, recollections of him using a Mustang with a different camouflage applied have also been given.

Some of the Tac/R Squadrons and pilots he visited and talked to had been conducting night time 'Ranger' operations over northern France and Belgium, shooting up targets of opportunity, particularly railway engines - looking for the glow of the fire box and sparks from the funnel to help find them. A limited number of the Mustangs that were used by two of the Squadrons were repainted in a C&M scheme that has been recorded and reported as utilising a darker gray (a dark version of 'mixed gray") in combination with the normal RAF Dark Green on the upper surfaces and again a darker than usual grey or black on the undersides. The night time 'Ranger' operations did not prove particularly fruitful or successful due to a number of factors so they were ceased after a short period and the aircraft involved were returned to the standard c&m for ACC Mustangs at the time.

From what has been published in multiple sources, including Geoffrey Page's autobiography, Maclachlan had settled on a single dark olive-ish green upper colour and initially staying with the medium sea grey undersurfaces. At some point he apparently decided that if he was going to conduct his planned sorties later in the day or on days with solid overcast, then a darker underside camouflage colour was required. This has been reported variously by eye witnesses at the time as either a very dark gray or black. Also mentioned were reduced national markings, again to reduce visibility and contrast.

One of the very few 'odd-ball' schemes carried by a RAF Mustang Mk.IA.
M

Interesting! Late in the war USAAF A-26's were coming off the production line with all over, top and bottom, OD. I presume this reflected their low level missions as well.
M

I have long thought that the paint scheme on those Hurricanes were the most attractive of any of that aircraft and painted a Monogram kit up that way over 50 years ago. I have two of the Dual Kits that came equipped with the proper markings for that aircraft and one day I'll try and do a better job of it. Before I cut open the canopy and sanded/polished the sliding section so I could have it open, but next time I'll use the Heat and Smash technique and try to get better results.
You must log in or register to reply here.

BATTLE OF THE NIGHT FIGHTERS
2 3 4