Interesting shot of this T-6. Note the rockets and the special flattened drop tank. 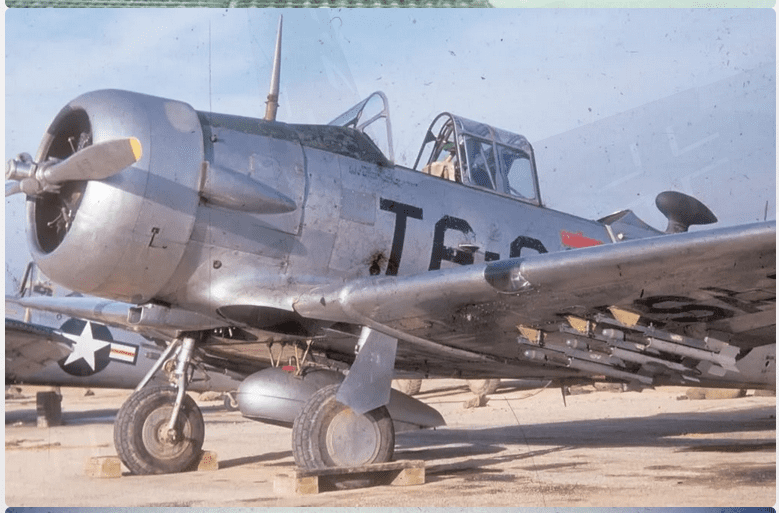 Looks like they not only made the bottom of the drop tank flat it seem they shaved a bit off the back bottom and made it flat as well.
S

I have mentioned elsewhere on the forum about an instructor I had who flew these in Korea. It came up when asked about flak. He said anti-air flak looked like ping pong balls slowly floating up. They were pretty to watch until you realised they were floating right through your wing.
M

I wonder what variety of drop tank that is, or was? Looks bigger than 50 gal. That might even be a modified napalm bomb made into a tank. I do not think there was a demand for 50 gal drop tanks by that time. All the P-40's and P-39's were gone and the jets carried much larger ones, except possibly for napalm. 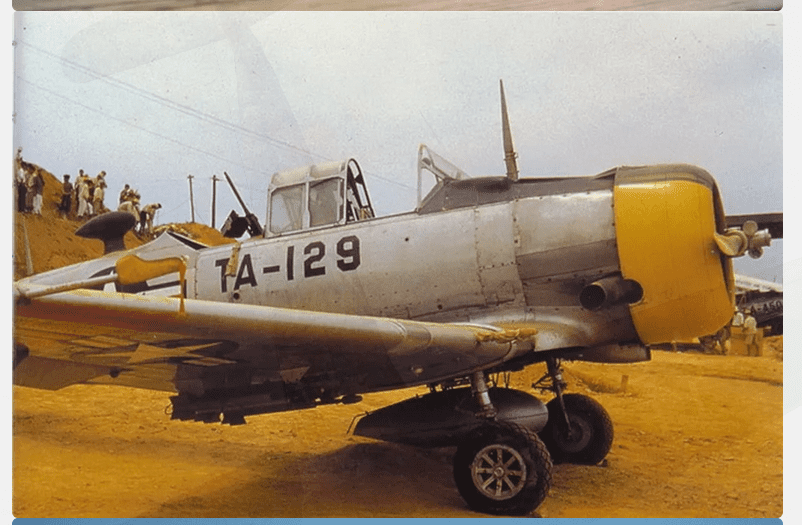 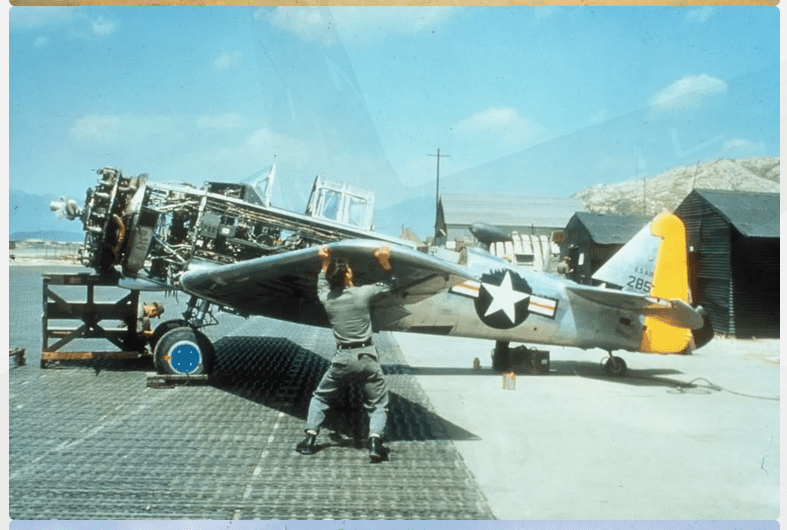 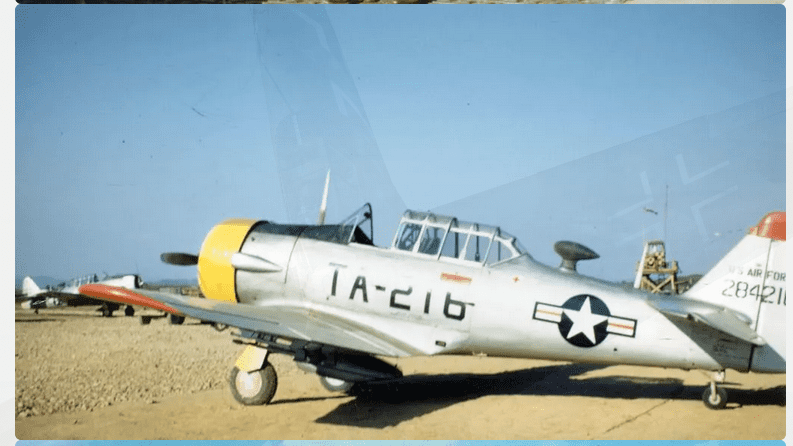 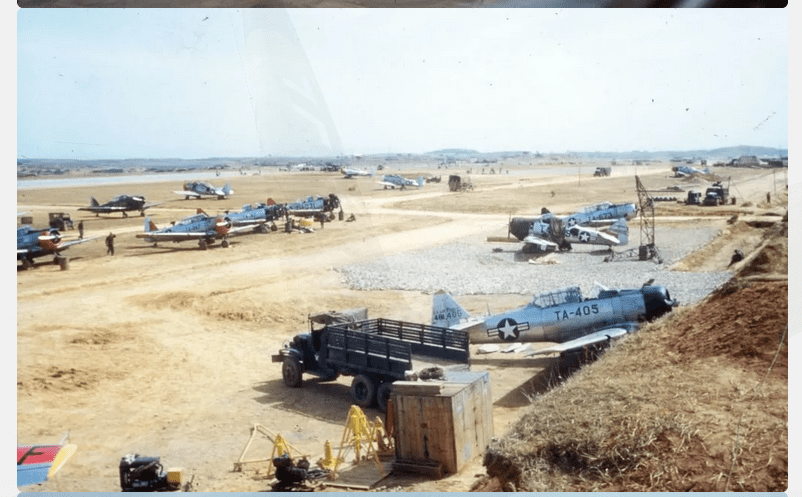 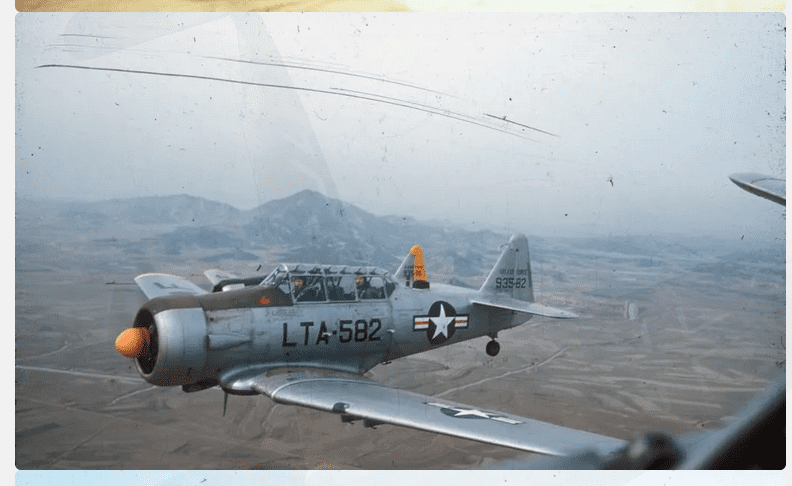 special ed said:
They were pretty to watch until you realised they were floating right through your wing.
Click to expand...

Yep, and what they did was not pretty, either.

These shots are from: Korea in colour / USAAF / USN Library / Forums - Axis and Allies Paintworks 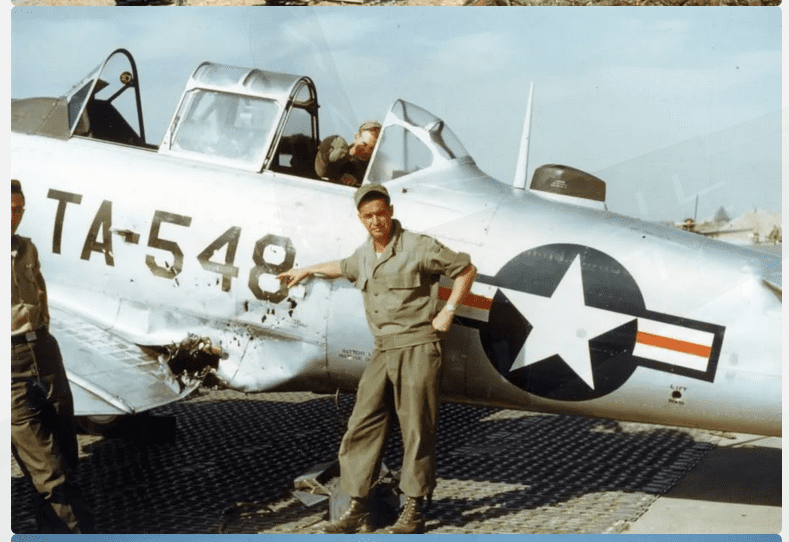 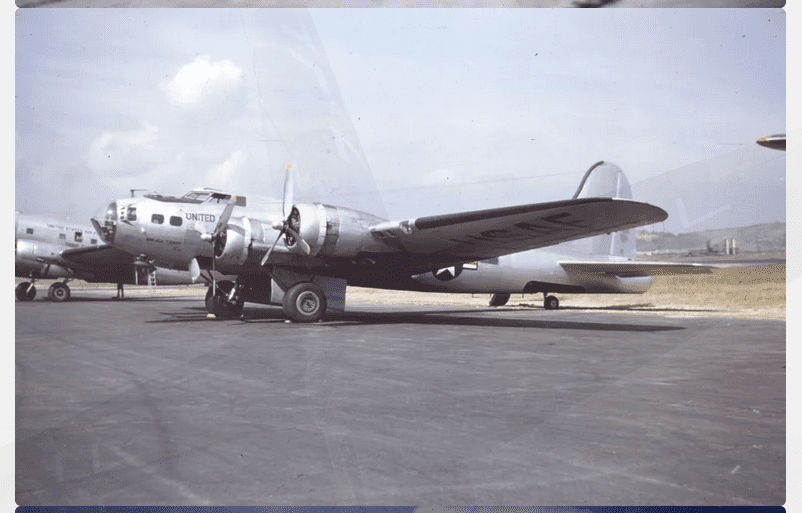 Another shot of an SB-17, with its lifeboat. 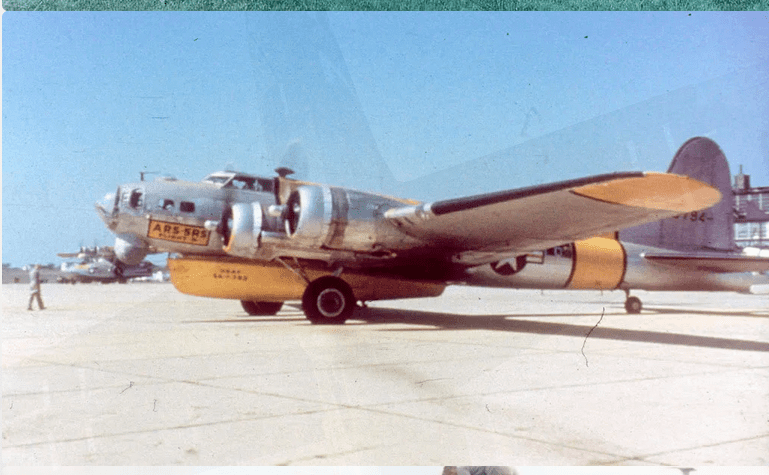 I really like the looks of the rear seater.

Dad was USAAC/USAF officer, and some friends in '50s were T-6 FACs. Their name for them was "Maytag Messerschmitts"

fannum said:
Dad was USAAC/USAF officer, and some friends in '50s were T-6 FACs. Their name for them was "Maytag Messerschmitts"
Click to expand...

Term was used for the L-4s during WWII. There was a song made up about them.

General Eisenhower was a licensed pilot, learning while on MacArthur's staff in pre-war Philippines.
After Allied HQ was moved to France, etc., much to the horror of his staff, he insisted on flying in Piper L-4s, Stinson L-5s, and even a conscripted Fiesler Storch around the front lines on inspection tours.
Though he liked to handle the controls himself, he apparently was always accompanied by another pilot. 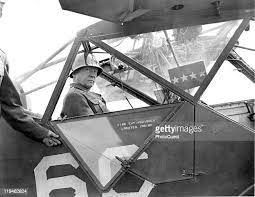 Not to quibble, but aerial artillery spotting was well refined in WWI, mostly from balloons then. Eisenhower and Patton both were involved in the pre-war maneuvers in Louisiana where a lot of the interaction of the air corps, infantry, artillery and the mechanized forces were refined. Both of these leaders were strong proponents of aerial spotting.

fannum said:
Their name for them was "Maytag Messerschmitts"
Click to expand...

I have read that this was also applied to P-51's, because Maytag made parts for the V-1670.

After WWII new J-3 Cubs generally were flown to their US destinations. Piper would let anyone with a license deliver one. Read an interesting description of flying one to the West Coast. Trying to find refuling stops was a challnge at times, since most of the airfields built for training had been shut down and had no fuel service, even if the runways still existed. A gas station next to a highway in the desert became a popular stop.

B-17s post war were numerous, but not in demand. Few foreign countries wanted them ... they wanted fighters, light bombers and cargo planes.
However, with warehouses full of spares and a cadre of trained crews in civil life, esp. ANG and AF Reserves, B-17s and a few B-24s were called upon for the Berlin Airlift.
Come Korea, they were adapted to carry fuel from Japan, and to patrol the coasts. Some were outfitted with radars in the belly, leading into the AWACs role, and some were outfitted with droppable lifeboats for sea rescue.
Remember that the air war in Korea took place over the North, and no pilot wanted to bail out over land so the closest out if damaged was to head to the water.
Korea, the Philippines and IndoChina in the '50s was a hodgepodge of WWII aircraft ... mostly US, but a lot of Brit and French. I was in VietNam in '63 and the ramps at Than san Nhut and Bien Hoa were more like museums than modern airports at the time.
M

In Korea they took C-47's, equipped them with a bunch of SCR-522 VHF radio sets, and used them to relay the communications from the FACs to the fighter and attack aircraft they were trying to contact.

fannum said:
Not to quibble, but aerial artillery spotting was well refined in WWI, mostly from balloons then. Eisenhower and Patton both were involved in the pre-war maneuvers in Louisiana where a lot of the interaction of the air corps, infantry, artillery and the mechanized forces were refined. Both of these leaders were strong proponents of aerial spotting.
Click to expand...

Hate to quibble, but was my statement that Patton was Instrumental wrong? At the time of the Louisiana Maneuvers Patton was a Major General and was involved in getting Mr Piper and his Cubs invited. This simple fact was INSTRUMENTAL in getting a leap forward in producing the huge numbers of grasshoppers that had such an impact on artillery spotting. Read Ken Wakefield's "Fighting Grasshoppers" Amazon product or "L-Birds" Amazon product


P.S. Eisenhower was a Colonel at the time of the Louisiana Maneuvers.
Last edited: Dec 31, 2022
M

I wonder if we will ever find out the true story about the Spitfire that attacked Patton's L-4 over France. Was it really from an RAF Polish unit that was nowhere near the area of the attack?

And interestingly enough, Patton's forces once opened fire on a RAF Auster, but did not shoot it down. The pilot was a young man who went into acting after the war; his name was James Doohan. Yes, THAT James Doohan.
You must log in or register to reply here.

A
Canucks over Korea

Canberra (not) in Korea
2