The Lancaster as a potential nuclear bomber in 1945

Status
Not open for further replies.

Okay, so I thought instead of continuing to hijack the other thread, I'd make a new one, because despite my objection to the initial suggestion (and I'll reveal why soon) whykickamoocow's thoughts on this are intriguing and have some merit, and have obviously sparked a bit of discussion. So, could a Lancaster be used and was it really considered for dropping nuclear weapons against Japan?
M

It is an intriguing idea. I'm stepping way out of my already limited knowledge here but it would seem that weight would be the deciding factor. That is either it can lift the payload or it can't. Other hurdles would be easier to address I believe.
As far as the Lancaster actually being considered for this task when I read one of the other posters mention that in the other thread that was the first I had ever heard of it but I did for sure find that interesting.
W

michael rauls said:
It is an intriguing idea. I'm stepping way out of my already limited knowledge here but it would seem that weight would be the deciding factor. That is either it can lift the payload or it can't. Other hurdles would be easier to address I believe.
As far as the Lancaster actually being considered for this task when I read one of the other posters mention that in the other thread that was the first I had ever heard of it but I did for sure find that interesting.
Click to expand...

Carrying the Grand Slam required extensive modifications, including removing turrets and the bomb bay doors. But it was twice the weight of the A-bombs.

Upkeep was 60" long, the same as the width of Fat Man's tail. It was also 50" in diameter. Overall it was similar in size to Fat Man. But it did hang in the breeze, and required modifications to the bomb bay, including removing the doors.

The Lancaster was considered to carry the initial nuclear bomb, the Thin Man. This was the same diameter as the Tallboy and 12,000lb HC bombs. In terms of length, Thin Man was slightly longer than the 12,000lb HC bomb and about 1m shorter than Tallboy.

To carry this the B-29 would need extensive modifications, the possibility of which was not certain at the start of the project. The Lancaster was brought into consideration if the B-29 could not be modified appropriately to carry the bomb. In the end it was possible and the Thin Man bomb turned out to be a failure, so was never used.


The main deficiencies of the Lancaster were its range, altitude and speed.

The Lancaster could not have dropped the bombs from the base used by the USAAF for the missions. But there were closer options had the need arised, such as Okinawa.

Speed and altitude were more of a problem. The Lancaster I/III's ceiling was in the low 20,000ft range. Not even 25,000ft when unladen, IIRC. But there were the Lancaster VI and Lincoln I which had two stage Merlins, which would have improved the height and speed at which the bomb could be carried.

Tinian was selected because it was out of reach of nearly all of Japanese airpower.

The base had to be completely free of threat and Okinawa and other islands closer to the home islands routinely came under attack.

Hmmm yep, I'd not heard of this either and would like more information. The biggest drawback in my opinion is the distances that needed to be traversed whilst carrying a sizeable load. Aircraft and engines suffer accordingly owing to the humidity and wind at altitude also plays havoc on range in the Pacific theatre. The Brits carried out long range trials in the CBI theatre during the war, but the loads carried to achieve good range were significantly less than what would have been expected from the same conditions as in Europe.

The answer, as had been pointed out in the other thread was in-flight refuelling (ifr). Tiger Force was going to carry out ops using Halifaxes, and Liberators operated by Flight Refuelling Ltd, but by August 1945, the RAF did not have one single aircraft in service that was capable of ifr. I have not seen a timeline which shows when such a capability was to be introduced, or indeed when Tiger Force was to be declared ready.
W

A couple of pictures of saddle tank trial Lancasters on this page.

I believe they were designed for operations in the far east.

wuzak said:
The main deficiencies of the Lancaster were its range, altitude and speed.

The Lancaster could not have dropped the bombs from the base used by the USAAF for the missions. But there were closer options had the need arised, such as Okinawa.
Click to expand...

Correct, as was Iwo Jima, which was used as an emergency landing base by the B-29 units, and was in use from around April 1945.

Having looked at data produced by the A & AEE, the Lancaster would not have been an ideal choice as even from the closer bases, it's performance whilst carrying a heavy load was indifferent at best and under the conditions in the Pacific, i.e. humidity and high winds at height, would have conspired to ruin the best estimates calculated in British skies.

Owing to the special nature of the modifications required to carry a nuclear device, i.e. removal of turrets and armour plating, as well as having the device protruding below the bomb bay, thereby increasing drag, it's worth looking at trials by aircraft modified for special use. In April 1943 Lancaster I ED825/G with no mid upper turret and modifications to carry the Upkeep mine was evaluated. Take-off weight was increased to 63,000 lbs whilst carrying 1,774 gal of fuel and 11,500 lb bomb. Range suffered compared to standard aircraft, at 1,720 statute miles, or 1,290 practical miles (whatever that means). Max level speed was reduced to 256 mph TAS at 11,000 ft whilst carrying the bomb.

This performance rules the Marianas out completely and also casts a shadow over plans to use Iwo Jima and Okinawa, taking into consideration the conditions encountered in theatre. That 1,290 practical miles would definitely shrink, making ops from both bases by similarly configured Lancasters a risky proposition.

In regards to the Lancaster VI, it may have seemed impressive on paper, but it was actually problematic in it's performance and was withdrawn from service in late '44.

In anycase, I would think that the Lincoln may have been the better candidate with it's better performance and lift/ceiling abilities.

In April 1945 Lancaster B.I (Special) PB955 was evaluated and its specific air range was calculated with a 22,000 lb bomb fitted. The report contains the following: "The results of the specific air range determination, corrected to ICAN standard conditions and to the mean weight of test to 64,000 lbs... At this weight, the optimum specific air range under ICAN atmospheric conditions at 15,000 ft in FS supercharger gear is 0.99 air miles per gallon. This is obtained by using full throttle and adjusting the RPM to give an ASI of 175 mph. A speed increase to 190 mph causes a 3% loss in range."

These confirm what I've been saying; the Lancaster, carrying such a weapon couldn't do it safely. Also, look at the height and speed figures. 15,000 ft at a speed of 175 mph. The Short Stirling was being shot out of the sky at an alarming rate by flak in 1941/42 at this performance. Suicide for a bomber over a heavily defended target in 1945.

A couple of pictures of saddle tank trial Lancasters on this page. I believe they were designed for operations in the far east.
Click to expand...

Trials were carried out with such an aircraft in India and the results were promising. The trial involved an aircraft fitted with Merlin 24s and dummy saddle tanks to establish the feasibility of ops in high temperatures at 72,000 lbs. With a full fuel load of 3,154 gallons, a maximum range of 3,470 statute miles was attained - this was carrying a bomb load of 6,000 lbs. This range figure would decrease substantially with an 11,000 lb (or more) load owing to the need to remove fuel to maintain max take off weight.
G

Bit of a repost from the other thread: 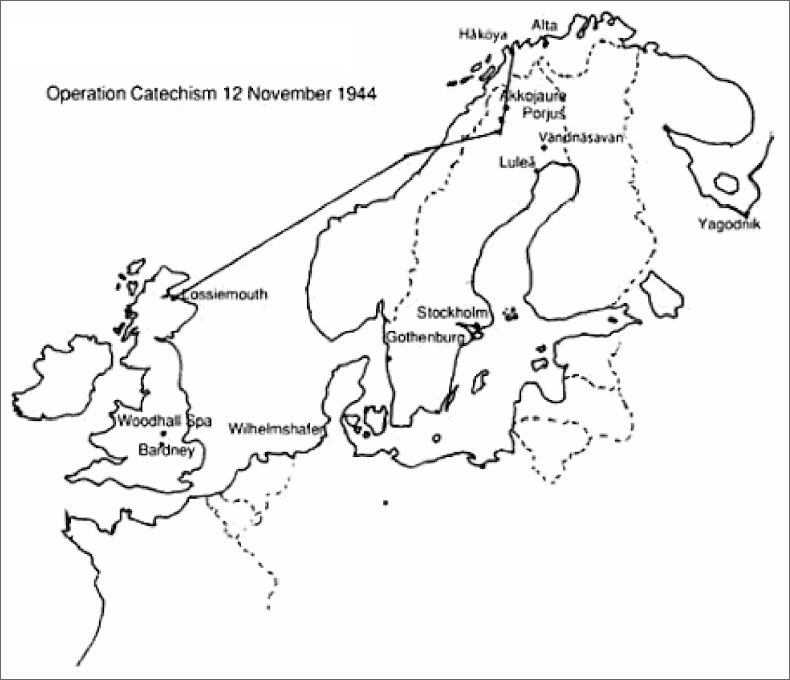 Yup, in Europe - again, ignoring the humidity and the effect it would have on performance and the high winds at height prevalent in the Pacific. Look at the figures I've provided.
G

Some figures I have re: tropical summer conditions -

Greyman said:
Where does that get our 2,400 mile Lancaster trip? Japan still seems to still be in range.
Click to expand...

Yes and no. Again, in order to maintain MTOW of 72,000 lbs something has to give. Either fuel or load. If you want 2,400 mile range, you can't carry the big bombs. If you want the big bombs, your range decreases to impractical levels. Again, what impact does this have on speed and altitude performance? Like I said, at 15,000 ft at a speed of less than 180 mph over Japan?

This still only gives us a range of 1,667.56 miles on a fuel capacity of 1,774 gallons. Again, less than what I calculated above, although speed has increased, as stated in the report, with a corresponding loss of range.
G

Nagasaki/Kokura are less than 500 miles away.

Again, completely ignoring the figures I've just posted and the conditions in the Pacific.

Presuming you are flying direct from Okinawa to Nagasaki and back (say, around 1,000 miles), the range figures under realistic conditions might just be feasible, but there's just not enough meat in the sandwich for any kind of diversion depending on conditions. Also speed and height to enable best AMPG at MTOW make this a suicide mission over heavily contested airspace.
G

I read your figures but I can't make out where a 2,400 mile North Sea flight gets hacked down to 1000 miles from Okinawa (with a few thousand pounds extra fuel).
W

Remembering that the return journey is at much less weight, so ampg will increase as well.

We all realize that the missions were flown from Tinian Island, a round trip of nearly 3,000 miles to and from target, right?

Status
Not open for further replies.

Wildcats in action in Europe 1945