I've heard a lot of folks questioning the accuracy of the brownish/yellow paint job on the Collings Foundation's B-17G "Nine O Nine", a well-known operational warbird. It's been said that no B-17 was ever painted in that color.

However, the few color photos of the original "909" that I've been able to find reveal that it was, in fact, very yellowish. The old color photos of 909 look even yellower than the Collings Foundation bird.

(for reference please see www.collingsfoundation.org/images/image-b-17artlg.jpg and other photos on the Collings Foundation website)

In addition, I've seen one color photo dated from WWII of another B-17 that wasn't 909 that also had a similar color (wish I would've jotted down the number of that bird!).

Can anyone comment on this? Do you think that the current "909" color is inaccurate? Is it possible that "909" started out as olive drab and became extremely faded after its long career (after all, it did survive over 100 missions)? Has anyone seen a picture of a real WWII B-17 in a light brownish/yellow color? All comments welcome and extemely appreciated!

When you say "yellowish", are you reffering to the old color photo's that might have aged over the years and show an inaccurate color?
L

syscom3 said:
When you say "yellowish", are you reffering to the old color photo's that might have aged over the years and show an inaccurate color?
Click to expand...

That thought has occurred to me - but I have no way of knowing if it is the picture that is faded or the subject itself (B-17G Nine O'Nine). It's really hard to tell.

I guess that is part of the controversy!

never trust wartime colour photos for accuracy. the colorization process obviously is noway on par with what we have today and pics fade over the many years ~ 60 ~ including many wartime black and whites
P

The actual thing that got me interested in aviation (at age 12, 1959) was the photo of 909 in the April issue of National Geographic Magazine's article "Fun Helped Them Fight", to which you all refer. I have been unable to find that photo anywhere on the net. Can anyone help?

As someone said, 909 in that photo may have looked yellowish due to the WWII color Kodachrome film used. Not only was early color primitive (we've all seen it in images of other WWII scenes), it was later discovered that war photographers tended to take photos then store them, sometimes for months, until they had a sufficient number to send back to the rear for processing. Time, heat, cold, temperature etc., affected the film's color tint. As you can tell from looking at 909, other objects, mechanics, ,trucks and such, also have some distortionu in their color.

However, the color on 909 may also have just faded severely over time, since she flew 140 missions and survived the war. As an aviation artist, I've published prints, and over time, if they are hung in drect sunlight, the reds and yellows will fade out. The same is true for certain oil and acrylic commercial paint colors. Check out an old roadside billboard and you'll see the reds have faded, etc.

As you all know, B-17s came out of the factory with a fresh coat of dark OD paint. Most of the 8th AF birds never survided enough missions to have their paint jobs fade. To support this, I refer all to Robert A. Watkins' book, Battle Colors, Insignia and Battle Colors of the Eighth Air Force in WWII, Volume 1: (VIII) Bomber Command. In the upper right corner of page 67 is a photo of a 381st BG (Triangle A) 533d BS (VP) B-17G that has obviously flown many missions. The engines are covered with black exhaust/oil stains, much paint has chipped and the a/c has had major battle damage repairs, with wing halves replaced showing old and new national insignia and different style tail and wing group markings. Its dorsal paint is also a tannish/yellow color like 909.

I presume the Collings Foundation wanted to replicate as closely as possible the look of 909. Only they used gloss paint (less friction in flight and longer lasting) than WWII dull, non-reflective paints.

I have built one of the old Revell 1:48 scale B-17G kits in 909's colors. If anyone would like to see it, contact me and give me yopur email address. I'll send it.

Hope this helps, if its length didn't put you to sleep.

Knowing what color the mechanics' uniforms *should* be, I think its safe to say that the color is off in this photo. The two on the ladders are definitely darker than the 909, but the guy in the sweater is almost the same shade as the plane itself.
S

The colour on that restoration looks like a perfectly good representation of olive drab. I'm sure the restorers would have matched their paint to the appropriate standard (FS23070 or FS34084).Olive drab was known to fade in some odd ways. I read of some P-40 pilots, operating in North Africa, who found themselves flying machines with a purple hue!
Steve

This photo looks re-touched or colorized to me...OR maybe the colors where effected by the process from which the book was printed. The picture looks like it was a copy, of a copy, of a copy (ect)...I think the weird color artifacts are more likely a result of a printing technique or some kind of color re-touching. Look at the color tones across the bottom of the photo...look how the color shades of the soil seem un-natural. Look at the somewhat uniform "gray scale" across the various objects regardless of "depth of field".

Regardless of which copy of this particular photo is being viewed, the aircraft displays a typical OD finish faded and abraded by the European climate. I'm only guessing, but I think the peserved B17 painted as '909' was done in such a way to replicate this look, but using more 'friendly' paints, to lessen the buil-up of dirt and stains etc. Not that many years ago, many 'warbird' ownes in Europe, the BBMF included, used gloss paints, purely to help preserve a clean finish, as the more authentic matt paints led to many hours being spent trying to keep the aircraft clean.

I know this thread is ten years old, but here are some more color photos for those who are interested. All are showing the age of the photos. 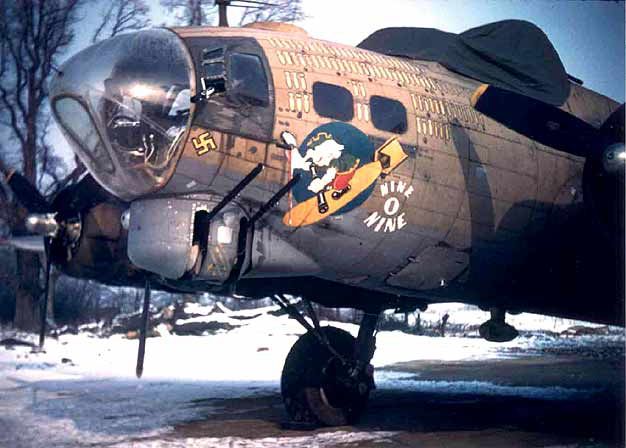 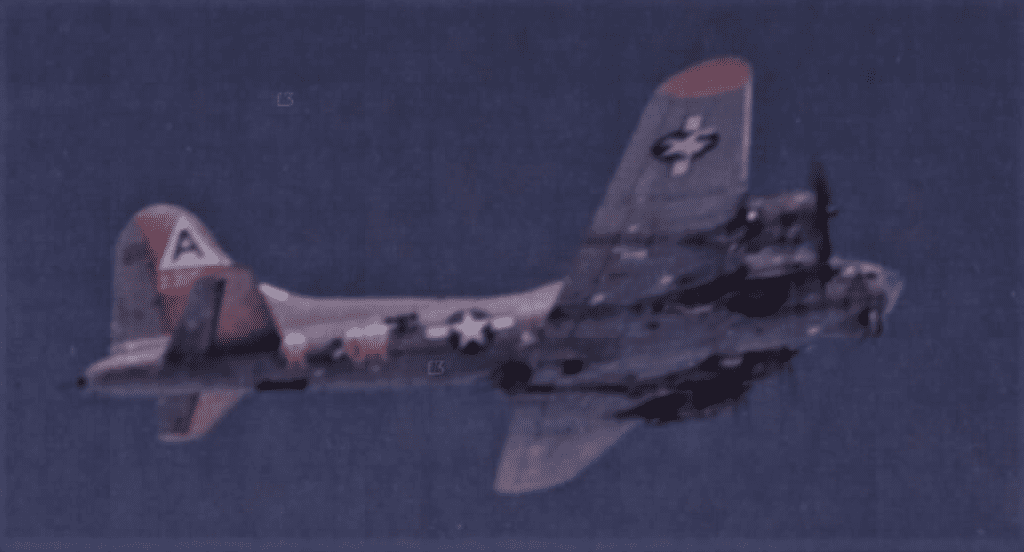 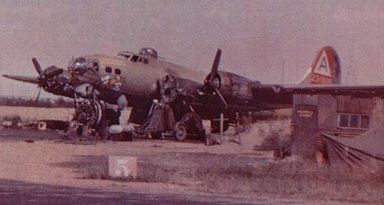 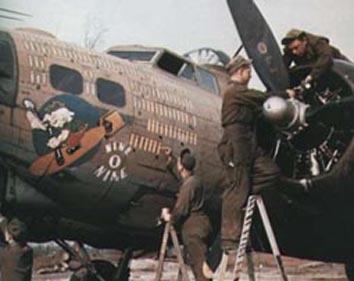 A number of issues arise with color photos, especially early ones of WWII vintage. Firstly the inherent color gamut of the film in question (what colors can it capture and what distortion) ; processing changes the "captured" color; storage and aging. It is possible for later color transparency films, even Ektachrome to retain good color with good storage. In an ongoing show I have several photos taken on 6x6 Ektachrome some 45 years ago that I recently scanned and printed. The color still excellent.

I have attempted color correction of older images, usually relying on items such as whiteouts and dungaree shirts which I know the color of. But in older photos often there are missing certain color spectra which makes things problematic for the overall color accuracy.

In effect one should not rely on old color photos for almost anything related to color.
S

About 20 year ago, there was some paint restoration product that was featured in FlyPast magazine. They had used it on the flying Vulcan. They had before and after photographs. The stuff was so good that not only did it make the paint on the aeroplane look better - the grass underneath the plane was also greener.
D

I know this is another necrothread, so hopefully (by now) everyone is clear that 909 was painted in a variety of Dark Olive Drabs and Neutral Grays. The vertical and horizontal stabilizers and the outer wing panels were painted by subcontractors, so those paints never matched the main fuselage and wing sections. Wing tips were often painted by a third subcontractor, and fabric flying surfaces were painted with dopes. (For modelers this presents an opportunity to experiment with a variety of paints!)

OD was notorious for its rapid fading. It could go brown, pink, tan, gray, or dull green, depending on the paint producer and when the paint was produced. (Each manufacturer had to reformulate his paint twice during 1942/43.)

As noted above, different films and filters would change the paints' appearances. Kenneth L. Kelly of the National Bureaus of Standards used to demonstrate the susceptibility of OD to different light - his office had day-light-balanced lighting, under which he'd display 3x5 chips of standard OD and Medium Green. The OD was always darker until he hit a switch changing his office lighting to fluorescent (high-UV) lighting - which made the Medium Green appear to be the darker standard. I've repeated the demonstration at home, and it always has the same results!

Anyhow, modelers have lots of options here, and there's little to worry about when searching for the right OD.

I am in the process of building a 1/48 scale model of "Nine O Nine" and the color is one of the hardest problems. Every photo I have seen of the Collings Foundations Nine O Nine shows a Yellowish/Tan color that very much agrees with the photos that folks are saying were yellowed or retouched. So do you think that the color it is painted now was borrowed from those old color pictures incorrectly, or was the Yellowed paint probably correct for the amount of sun fading that had taken place. Attached is a photo of 909 from the spring of 2019 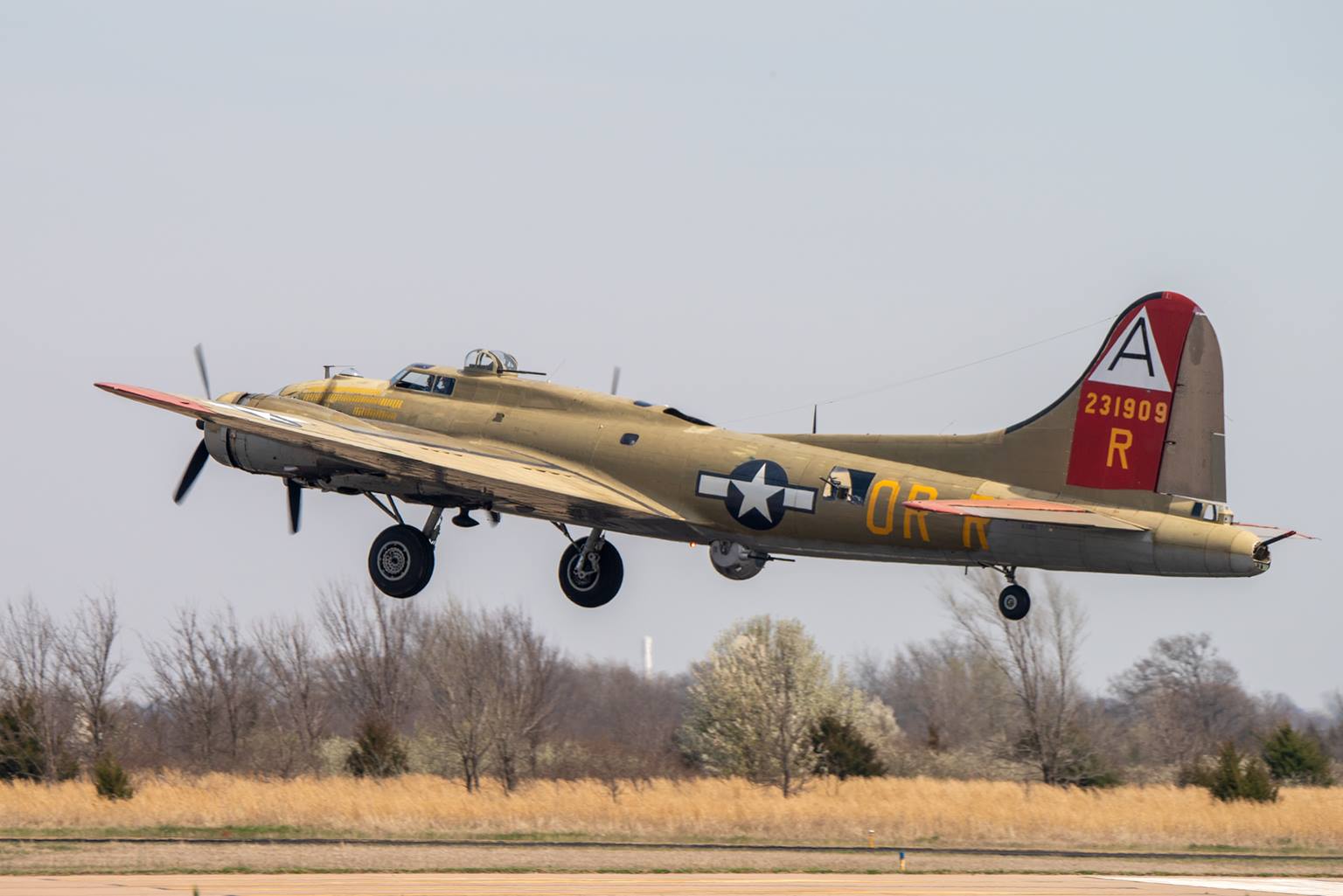 The original wartime paints were mainly nitrocellulose lacquers and aged very quickly in the sun and with the cleaning fluids used. If CF painted 909 with lacquer then I would expect that the colours will be fairly realistic for a typical WW2 aircraft making the allowances that Dana mentioned above
Last edited: Nov 1, 2019

CF 909 was painted using the colorized photo...we lovingly referred to it as Baby #(@# Brown. There are a number of black and white photos of 909 on the 91st web site and it is true OD. The attached images show 909 in color leading a gaggle of squadron mates. Hope this helps.

My pictures of 909 about 2 months before the crash.

? on Color of Cockpit Interior of Me 410 at Cosford

P
Why is there a difference in color between the planes of same Sqdr?