A collection of Paper proyects and others.

This is a proyect af a self propelled 1500 tn 80 centimer howitzer very much like the Dora but mounted over 4 diesel electric traction tracks......crazy

CharlesBronson said:
A proyected anti-aircraft vehicle, the Twin 3,7 cm Flak 18 over a Panther.

i scratchbuilt the turret using that pic and use a regular panther chassis, just need to glue the gun muzzles and put the modelkasten tracks and voila!!!!

Looking for more info, I found out that the actual name of this projeckt is "Flakpanzer Coelian"

The Tiger II may have been interesting but I think it was a long shot to ever be produced.

In December 1943, Rheinmetall-Borsig started a project to mount two 3.7cm FlaK43 in a fully-armoured turret, on the chassis of a normal Panther. A wooden mock-up turret was mounted on a Panther Ausf D chassis. The final design for the turret had sloping armour similar to the schmal turret turms of the Panther Ausf F. Production of this tank was continually delayed

Nice pics to compare the shapes of the Tigers and the Lion.

How far along was the Lion in development process. I doubt it was any close to being built.

The development of super heavy tank started as early as 1941, when Krupp started the studies of superheavy Soviet tanks. In November of 1941, it was specified that the new heavy tank was to have 140mm front and 100mm thick side armor. The vehicle was to be operated by 5 men crew - 3 in the turret and 2 in the hull. This new panzer was to have maximum speed of some 44km/h being powered by 1000hp Daimler-Benz marine engine used in Schnellboot (torpedo boat). The main armament was to be mounted in the turret. The weight was to be up 90 tons. In the early months of 1942, Krupp was ordered to start the process of designing new heavy tank designated PzKpfw VII Löwe (VK7201). Its design was based on previous project by Krupp designated VK7001 (Tiger-Maus) and created in competition with Porsche's designs (including first Maus designs).VK7001 was to be armed with either 150mm Kanone L/37 (or L/40) or 105mm KwK L/70 gun. Lowe was to utilize Tiger II's components in order to simplify the production and service.

Adolf Hitler ordered that the design Leichte Löwe was to be dropped in favour of Schwere Löwe. Lion was to be redesigned in order to carry 150mm L/40 or 150mm L/37 ( probably 150mm KwK 44 L/38 ) gun and its frontal armor protection was to be changed to 140mm. In order to improve its performance, 900-1000mm wide tracks were to be used and top speed was to be increased to 30km/h.

In late 1942, this project was cancelled in favour of the development of the Maus. During the development of Tiger II, designers planned to build redesigned version of Löwe (as suggested by Oberst Fichtner), which would be armed with 88mm KwK L/71 gun and its frontal armor protection would be 140mm (as planned before). Redesigned Löwe would be able to travel at maximum speed of 35km/h and it would weight 90 tons. It was to be powered by Maybach HL 230 P 30, 12-cylinder engine producing 800hp. Löwe would be 7.74 meters long (with the gun), 3.83 meters wide and 3.08 meters high. Löwe would be operated by the crew of five. It was planned that Löwe would eventually replace Tiger II.
Also it would be fitted with the 128 mm L/60 gun.

From February to May of 1942, six different designs were considered, all based on the requirements for Löwe. On March 5/6th of 1942, order for heavier tank was placed and project Löwe was stopped in July of 1942. Löwe project never reached the prototype stage but it paved the way for its successor's development - Porsche's Maus.

It really was silly. 90 tons is way too heavy for a tank of that day - but it was much better than the Maus which weighed 188 tons. The Maus was just beyond stupid - at least the Lowe had some sort of potential, although small.

Germany should have kept the limit at 60 tons. The King Tiger was 68 tons and that was too heavy - it's not like the Tiger couldn't deal with anything the Soviets or Western Allies threw at it, it only weighed 54 tons.

I have to agree with you, probably the good relationship between the austrian corporal and Dr. Porsche had something to do with that.

The Lowe designed for Henschel was much more realistic proyect than this demential artefact.

Certainly was the most bizarre and pointless designs of Germany to get off the drawing board. Three or more Tigers could have been built from the resources used on making one Maus - and even more off the time to design and build it.

The E-Series program was conceived by Dipl Ing Heinrich Ernst Kniekamp, Chief Engineer of Waffenpruefamt 6 in May of 1942. In April of 1943, Heereswaffenamt (Army Weapons Office) accepted his program and ordered many different manufacturers to start the planning and development of the Entwicklung (project/development) / Einheitsfahrgestell (general purpose chassis) Series. It was designed in order to replace armored vehicles and tanks that were used by the German Army from 1945 onwards. All six basic designs of E-Series would have standardized parts making their production, maintenance and service easier and cheaper

The jagdpanzer version armed with the 75mm L/48 Stuk. 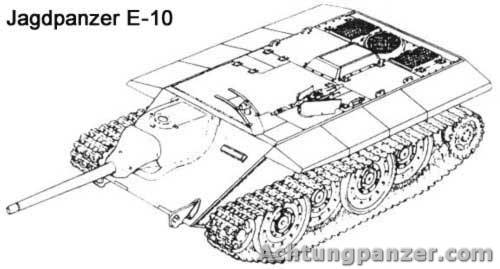 MG-42 with shield, I am not sure that it was remote controlled.